I think my husband is suicidal...if not, then he's an idiot.

Yeah, yeah...I've been MIA for a bit. Between the 3 little ingrates masquerading as the sweet children I once had, the husband I once thought I knew and persistent water retention, I've been on the proverbial warpath for the past week.

I'm not even going to get started on the kid stories. Suffice it to say I took every electronic they possessed, sent them to their rooms and cashed in their college funds to pay for my Botox/Restalyne appointment later this week.

But I'm used to that. My children are spoiled a bit and while they have good hearts, the part they choose to show the most would be the area I'd like to put a foot in, on most occasions.

But my husband is another matter. Like most (trained) married men, he's predictable. He is also aware of several immutable truths in marriage and while he slips up occasionally, I've never seen him do something as insane as what happened today, in all the years I've known him. There have been times his rationale confused me, but at least I could see a little sense in the foundation. But this...THIS has me worried to no end.

My husband is clearly either suicidal or downright stupid.

It started with me sitting in my craft room since 7am this morning. No, I haven't been crafting. I've been surfing the internet, catching up on my blogs; gossip blogs, decorating blogs, etc. In short, being completely useless. I could afford to be! Today was one of the rare days I had nothing planned. So you can imagine my surprise when a Duke Power truck pulled up in front of my house.

For my out-of-state/country homies, Duke Power is our electric company. Having them pull up in front of your house during a weekday can be a little disconcerting, as it means you might be a bit late on the bill and they have to remind you how weak and pathetic you are without access to lights and other necessities like dishwashers and the internet. Anyway, I went to the door and greeted the guy, who was holding 2 big pieces of equipment.

He introduced himself and said he was here, as scheduled, to put the devices on our air conditioning units. He must've seen my puzzled expression (or heard me mumble WTF?...not the letters, either) so he showed me the work order.

"So is there something wrong with our units?" I said.
"No ma'am. We spoke with your husband and he signed up for the program."
"What program?"
"Our conservation program." he said.

I paused here to gather my thoughts. The two words that kept clanging around in my head were 'A/C' and 'Conservation'.

"My husband signed up for a program to conserve energy via some type of monitor device on our A/C units?" I said, slowly.
"Yes ma'am." he said, completely oblivious. "During peak times, this device will shut your A/C down and not only conserve energy, but can lower your bill."
"Lower our bill." I stated, with a bit of relief. "So that's why...well...it must save a good bit of money, I imagine. I see why he would be interested..."
"That it does!" he chimed in. "This device has a max number of times it can shut your A/C down in a 24 hour period."
"Shut my a/c down?" the danger was back.
"Why, yes. But never more than a half hour." he smiled.
"Half-hour a day?" I said, through gritted teeth.
"Half-hour every hour. Every day." Now, I saw a puzzled look on his face.
"You're saying that I could have my A/C shut down as much as 12 hours a day? So tell me, what is the max I would save with that?" my voice was icy.
"8 dollars. A quarter." he took a step back.
"So my husband decided to Hell with the fact that I've been begging him and the kids for YEARS to turn off extraneous lights and take shorter showers and he chooses to shut down the A/C 50% of the time to save less money in a year than he pays for a round of golf? Especially now that his wife started having hot flashes that are brutal enough that she's learned to strip off her clothes faster than Kim Kardashian locking in on the smell of money nearby??? So bad that she's lost 30 pounds since fall without trying???? Are. You. F**KING. KIDDING. ME?"

Yes. I actually screamed the last part. Not to his face, mind you. It was to his back, as he was halfway down the driveway, back to his truck.

As for my husband, I haven't said anything to him, yet. He's still at work. I would never call him and get into something like this while he's at work. Not because he may be thought of as unprofessional, but because I'm not wasting the ass-chewing I have planned for him on a cell phone. Nope...this is an 'in-person' confrontation if there ever was one.

In closing, allow me to offer a bit of advice to anyone in a relationship in which you cohabitate.  Saving money is fine. Making sacrifices to do that is admirable...but only when you BOTH sacrifice. My husband is hispanic and from Texas. Heat doesn't bother him. I am a translucent white, 46-year-old female, who has started para menopause and on top of my sensitivity to the heat in general, now I stand to burst into flames every couple of hours. There isn't crap for sacrifice on his part.

But to be fair, that's not what infuriates me. It's the fact he tried to sell me out, comfort-wise, for 36 pieces of silver...I mean, dollars. Didn't mean to throw in a whole biblical reference there. But, you know, maybe that's kind of appropriate...when he gets home from work in time to eat, he'd better hope this supper isn't HIS last.

(Please pardon any spelling or grammar mistakes. I simply don't have a chance to edit this. Time is short and I've got vengeance to mete out. Thank you for your understanding.)

Posted by papercraftgoddess at 4:07 PM 6 comments:

Starbucks, the Devil and Preschool, Oh My!

For your reading pleasure while I'm trying to finish up mother's day prep...enjoy!!

Diary of a Desperate Housewife Series
by Carmen Conners

Before I was fired and decided to become a stay at home mom, I maintained that women who stayed at home were nothing short of Saints. 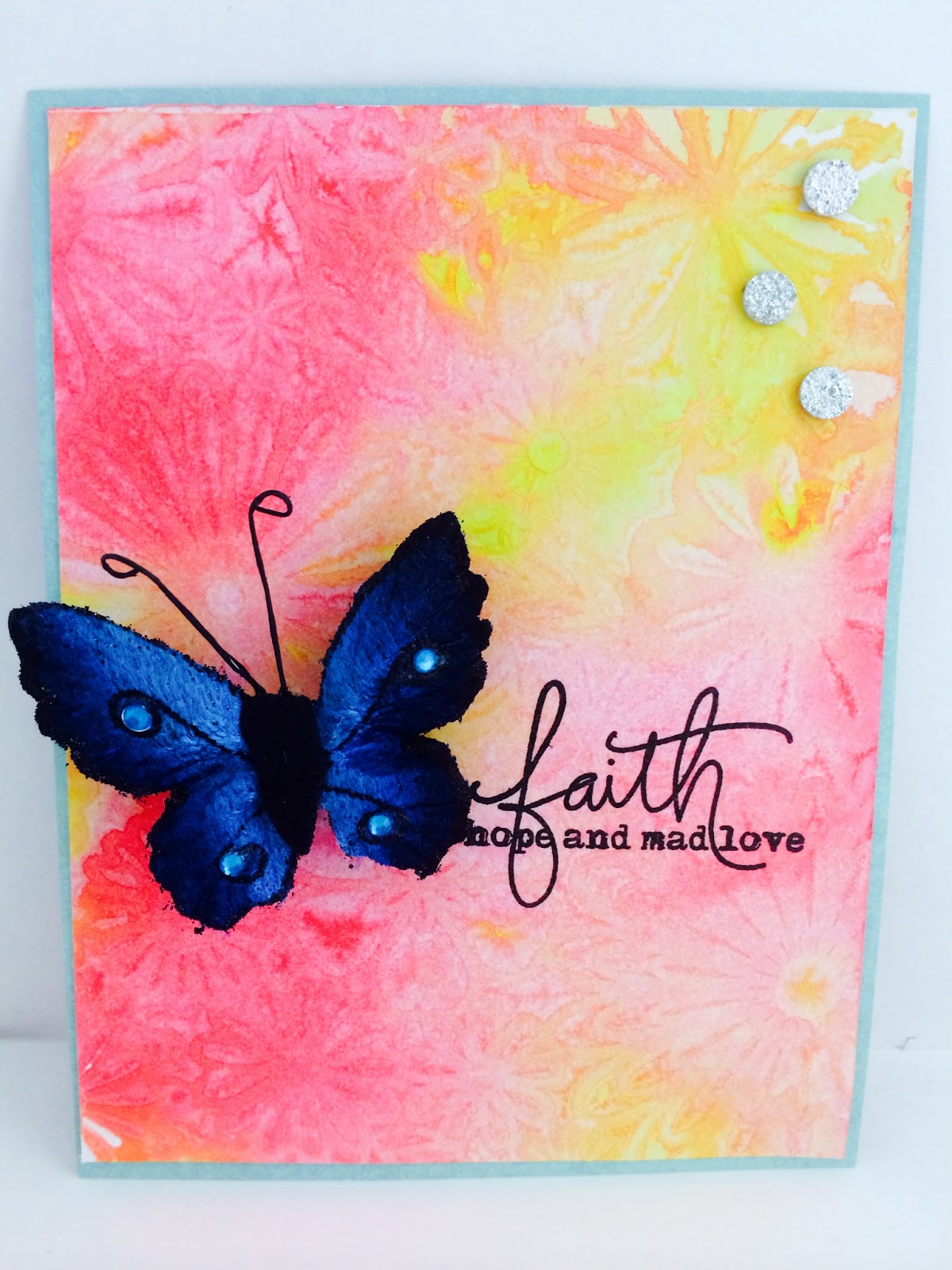 The first technique for today was a watercolor wash background. I used pink and yellow watercolors on my Archer's Hot Press paper. LOVE that paper! Doesn't bow up and you can add water til' the cows come home and that baby won't warp or pill.

Posted by papercraftgoddess at 5:11 PM 7 comments: