Flights of Fancy, Saying Thank You and Hellfire. The BEST of my Non-Sequitur's to Date.

Okay...let's start at the beginning.

Not at the 'beginning' beginning...I wouldn't have enough time just to cover all the time-outs and paddling (yes...PADDLING) during my elementary school years, much less work my way up to my current age!

Let's just start at the beginning of this past Spring. Which just happened to coincide with a huge decrease in whatever it is I do here on this blog. Face it...we all have a name for it, but I won't put you on the spot.

What is the FIRST thing you'd think to do if unemployed (with no jobs in sight) and a propensity for impulsive action and disregard of current job and financial state?

Which I did. A beautiful, quarter-horse mare named Coco, whom I adore. Even after she's chomped on me a time or two and stomped on me. Yes, she's a little on the high-maintenance side, but she's a love and she makes me get out of the house on a daily basis. Which is what the doctors say to do. Even thought they MIGHT not have specifically recommended that I buy a horse, that's the way I heard it.

So, knowing that I cannot possible do two things at once (no adhd med is THAT good), I've been playing around with the horse since April. Now that it's hot enough to convert even the most heinous of sinners (seriously...the threat of hellfire is scary after suffering through the nastiness of an NC summer...THIS summer, in particular) I find myself back in the relative cool of the ol' craft room.

I'm sure I've mentioned my 'brass source' before...his auctions can be found HERE

I've been buying for quite awhile. I started with buying assorted charms by the pound and worked up to having to buy a large toolbox to keep all the brass I've bought. Because now, my new love is assemblage art and, next, actual wearable assemblage art jewelry.

Chatelaines have been an attraction for awhile. And to thank my 'dealer' for his generosity (every time I order, he includes extras he thinks I'll like), I decided to make him and his wife a piece of shadowbox art.

I love making reproductions of Art Nouveau and French pieces. For my patrons (I use that word in it's original sense...but it's also because their last name is 'Friend'. So it sounds weird to say 'To my friends, the Friend's.' So, 'patrons' it is.) I found this chatelaine, recreated it and mounted in a shadowbox for them. Since they are artists in their own right (painters) they assured me they loved it. Which delighted me and re energized me to get back to the table and create. Here's the piece I found that I wanted to recreate: 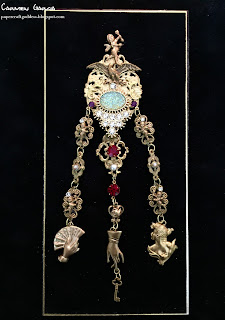 Needless to say, I had a BLAST making this. Especially for the people who have been so incredibly generous and supportive.

My next project is to make actual wearable art recreations. I'm working on a piece now that may actually put my soul in jeopardy, regardless of the heat this summer. Perhaps it's due to the fact I have never learned how to make jewelry, and E6000 can only help out so much. Framing is easy...THIS is driving me nuts. But if ANYONE can make it work, you know that yours truly is the one to do it.

Posted by papercraftgoddess at 1:29 PM 2 comments: