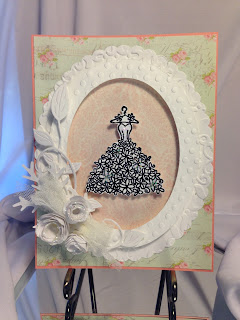 Lately, I've been on a CASE (Copy and share/steal everything-complete explanation and rules in my previous entry) spree.

I go through stages with this hobby. I'll spend weeks CASE'ing things I love, then return to creating my own stuff. I feel it's mostly due to a desire to focus on learning techniques; like using a brayer, complex layering, alternate uses for tools, and learning how NOT to operate a hot glue gun.

If I have to be totally honest, though, most of my 'mastering techniques' stage mainly involves learning to prevent myself from injuring ME, as opposed to actually mastering anything. For instance, there are a ton of sharp tools used in paper crafting. The first technique I actually mastered was in keeping a First Aid kit handy and staying current on my tetanus shots. I also learned a valuable lesson about never touching myself above the neck while crafting, in what turned into a life and death emergency near the beginning of this hobby, and which almost rendered me sightless. Fortunately, I received help in the nick of time. My husband was beside himself and worried sick until he was sure I was going to pull through. Like men tend to do, however, he deals with the terror he experienced by trying to inject humor in the retelling of it. Which is probably why he refers to that dark time as the "1500 dollar ER visit to pry my wife's eyes open she'd somehow managed to glue shut using something called Stickles during the Master's Golf Tournament tragedy".

But this was different. I'd spent six weeks purchasing the materials I would need, finding the perfect designer paper and learning how to roll paper roses for my most ambitious project to date. I'd wanted to CASE this card for months and I finally felt I was ready.

It took two days. This project was so intense that I actually had to purchase a hot glue gun and...in what was a first...LEARN TO USE THE DAMN THING THE SAME DAY!

I sweated and cursed and double-checked myself. I ended up having to roll 27 roses to get 3 that were right. MY CHILDREN HAD TO EAT FAST FOOD FOR EVERY MEAL BECAUSE I WAS TOO BUSY TO COOK FOR THEM!

Wait...that last part is pretty much how it happens at my house all the time. Sorry. I get carried away sometimes.

When the last rose had been hot glued into place and I was wrapping the last bandage around my third degree burns, I took a moment to imagine my husband's pride in my skill and dedication.

See, he'd been on this journey with me. He'd listened to me talk about needing this and that and had actually observed the complexity of the card I wanted to CASE. He knew I was  attempting something out of my league. He'd also looked in on me as I worked and knew my heart and soul was being poured into this. Along with my sweat. Literally. Lots and lots of sweat.

So, after the last bandage was wrapped (but not before collapsing in tears and raising my hands to the Heavens-a la a Hallmark crazed Norma Rae) I grabbed my phone and texted my husband.

I didn't respond immediately. I would like to say it was due to taking a moment to think before I said something I regretted but, in truth, it was because Apple had yet to invent enough character space to accommodate the obscenities I was planning to send.

"NICE?" I screamed as soon as he walked through the door. "Are you effing kidding me? NICE?"

He paused in the doorway and I almost heard the clicking as he rifled through his memory, trying to figure out what I was talking about. Knowing my fury would intensify if he didn't figure it out quickly, he panicked. "What? What did I...wait! Wait!! The card? The card!," the word sounded close to a sob. He must have seen the answer in my face because he looked relieved.

But then, as men tend to do, he simply failed to stop talking. "What? Why are you mad? I saw it! I told you it was nice!"

I smiled at him. I could see he knew I was, in no way, forgiving him. But I could also see his face showed hope; that sweet, yet incredibly stupid, look of hope that I might let him off the hook for once.

"You're right, honey." I said, calmly. "I shouldn't have taken offense. You DID say it was nice."

I waited for the hope in his eyes to grow until I felt it was significant enough to enjoy crushing it from his very soul. "And I want you to know that being married to you isn't fulfilling, as of today. It's just nice. I used to tell you that you're a wonderful dad, but nice works just as well. Our marital relations were earth shattering, but why bother with those pesky adjectives when the word nice will do?  I'll also drop  'incredible' and substitute 'nice' when I refer to the size of..."

"Okay!" he said, loudly. "I understand! I'm sorry! Really. I thought it was really beautiful work! I was so..."

I listened to him play every verbal 'get out of trouble' line he had stored in his meager arsenal. I smiled at him, gently, encouraging him to continue. As he babbled on, I couldn't help but think that I had, in mere hours, hit a new high in my crafting and in my marriage. There would be one less unacceptable, hurtful...what am I saying...one less VULGAR word uttered in my home by a thoughtless man, as of this moment.

I walked away with him still babbling something about his sense of self-worth doubling (or trebling) every second I was in his life, and headed to get my hands on more paper; I found myself hungry to create something beautiful...something clean...something pure, in my  harmonious and peaceful abode.

Now...where the f**k did I put those Stickles?

***I'd like to extend a very special thank-you to Lee Ann, who originally created this card back in January. It should be hitting her blog http://greytpapercrafts.blogspot.com/
in several weeks, but you can go to her blog and access this card and even more of her works at my favorite hangout, Splitcoast Stampers. She has a link to her gallery at SCS from her blog. I appreciate her being kind enough to lend her talent to so many of us and show us the things that are truly possible, we would never have believed were. If you want to be blown away, visit her blog and then head to SCS. The talent that resides there is immense and everyone is always eager to send a kind word and answer questions. They'll even tolerate a stalker, occasionally. At least, I know they'll tolerate a stalker without filing a restraint order. As far as I know. Or think. Oh, crap. I'd probably better check on that.
Posted by papercraftgoddess at 7:03 PM 3 comments: 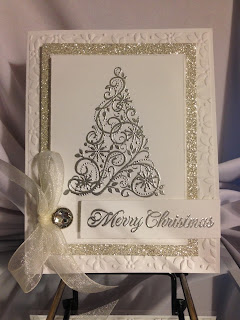 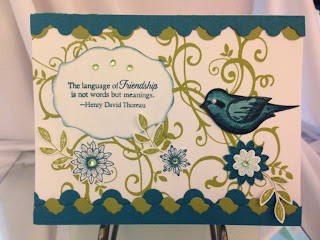 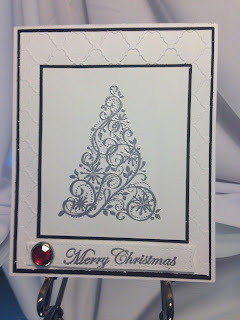 I honestly have no idea what happened. One moment, I'm creating original cards like I'm a Hallmark on Adderall. There was no challenge too great to field, and no child too favored  to toss out of the craft room. I actually felt I was on my way to being a REAL Papercraft Goddess...not just a sarcastic blog title because I couldn't figure out another clever use for the word 'ink'. Well, there was the 'inking along' blog I started. Then, feeling it was too vague, changed it to my name and followed it with 'tINKers'. But even I couldn't feel good about going to a blog that read carmenstinkers.blogspot.com

The point is, I was a madwoman. But each day saw me a little more confident and competent. It was a great feeling, while it lasted.

But then IT came into our lives.

IT stripped me of my earned (albeit slightly delusional) CARDMAKING BIRTHRIGHT legacy and left 80 wt cardstock tasting like ashes in my mouth and saw my Copics reduced to one kid's need for more color variety on his Iron Man Velvet Art endeavor.

When IT opened, we all fell victim. Thus, my absence and subsequent loss of drive, determination and...wait...I think there's another 'D' word but am too drained to dwell on it. DAMN you, IT...you had to take my words, too!

IT happens to be the club pool. That's right...the pool. The entity that calls to my children day and night. "I know you hate me," it whispers in my ear, "I know you despise having to run around in a bathing skirt instead of bathing suit, but if you DON'T bring your children to me, they'll run wild in the house and you'll have to entertain them."

Needless to say, the pool wins.

On a side note, (which is just really a nice way to say my brain veered off in some weird direction and I want you to think I'm merely making some profound connection) the fact we belong to a club is hilarious. Friends are already making bets as to how long it'll be before my hellions get us thrown out. I'm in at 2 months and 17 days. I wasn't allowed to bet so I used a shill. Hey...mama's gonna need the cash to put all three in a daycare if this fails.

But...back to my cardmaking dilemma. The really sad thing about all of this is that I intended to put up two cards I made before going to Austin, TX for the weekend of the 4th. I genuinely felt I couldn't create anything. So, I CASEd several. CASE is an acronym for 'Copy And Share Everything'. The word Share becomes Steal if you don't link to the other person's card. So, to shorten my Confession this week, here's the link for 'bird' and the other for 'tree' and THIS ONE. Gorgeous cards, ladies, and I hope I CASEd them in a way that reflects well upon you. As to me, I'll work on getting that drive back and perhaps figure out things I can do AT the pool which will help me return to the glorious days of my cardmaking, when ideas fell like raindrops and my skill grew with each passing moment.

In short, I just need to find out if strapping a couple of floaties to the kids and leaving them at the pool from 8-5 is okay by Dept. of Child Services Nazis. You never know...they're just so strict about everybody having to raise their on kids! So much for that 'it takes a Village' crap.

Posted by papercraftgoddess at 1:16 PM No comments: