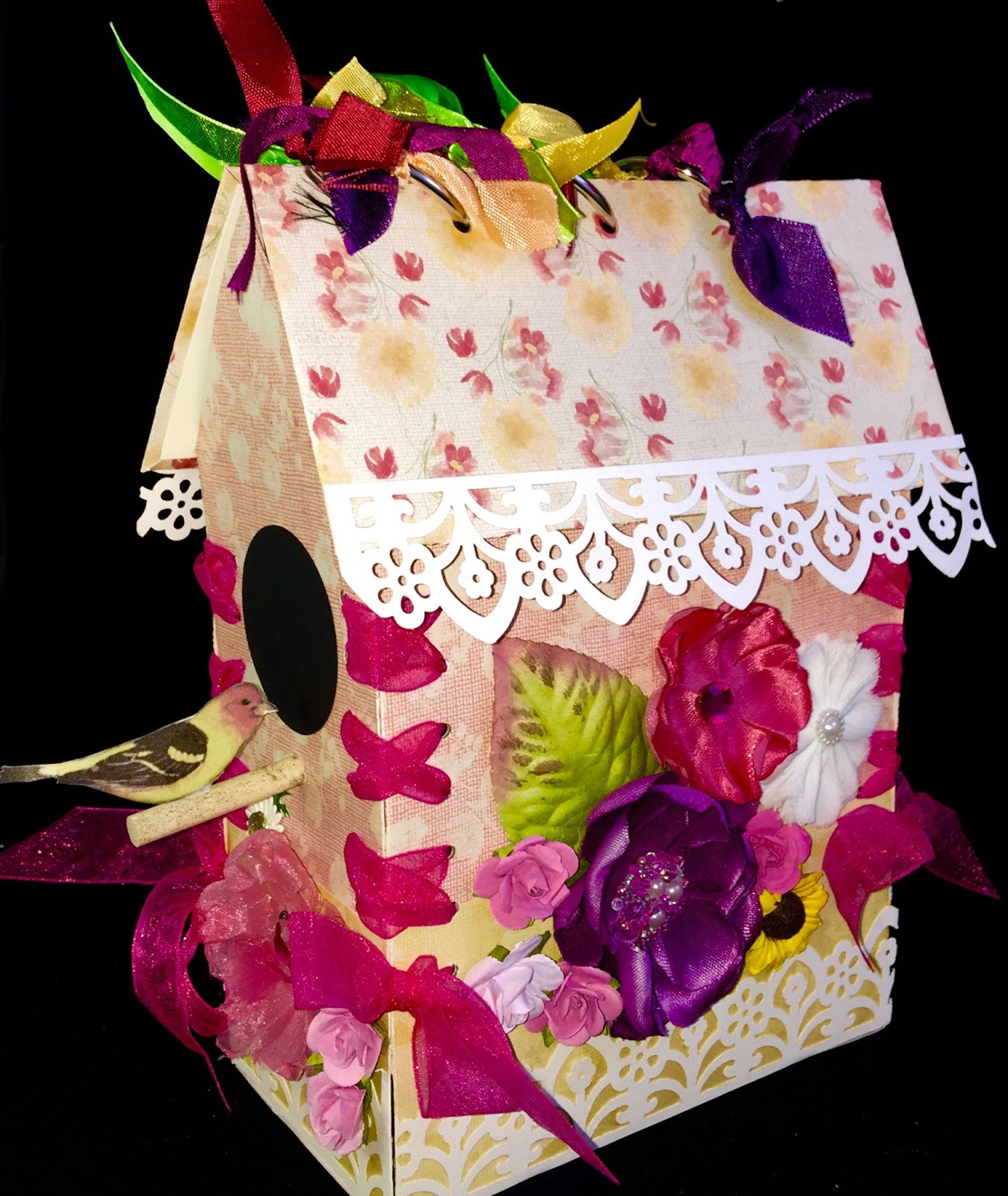 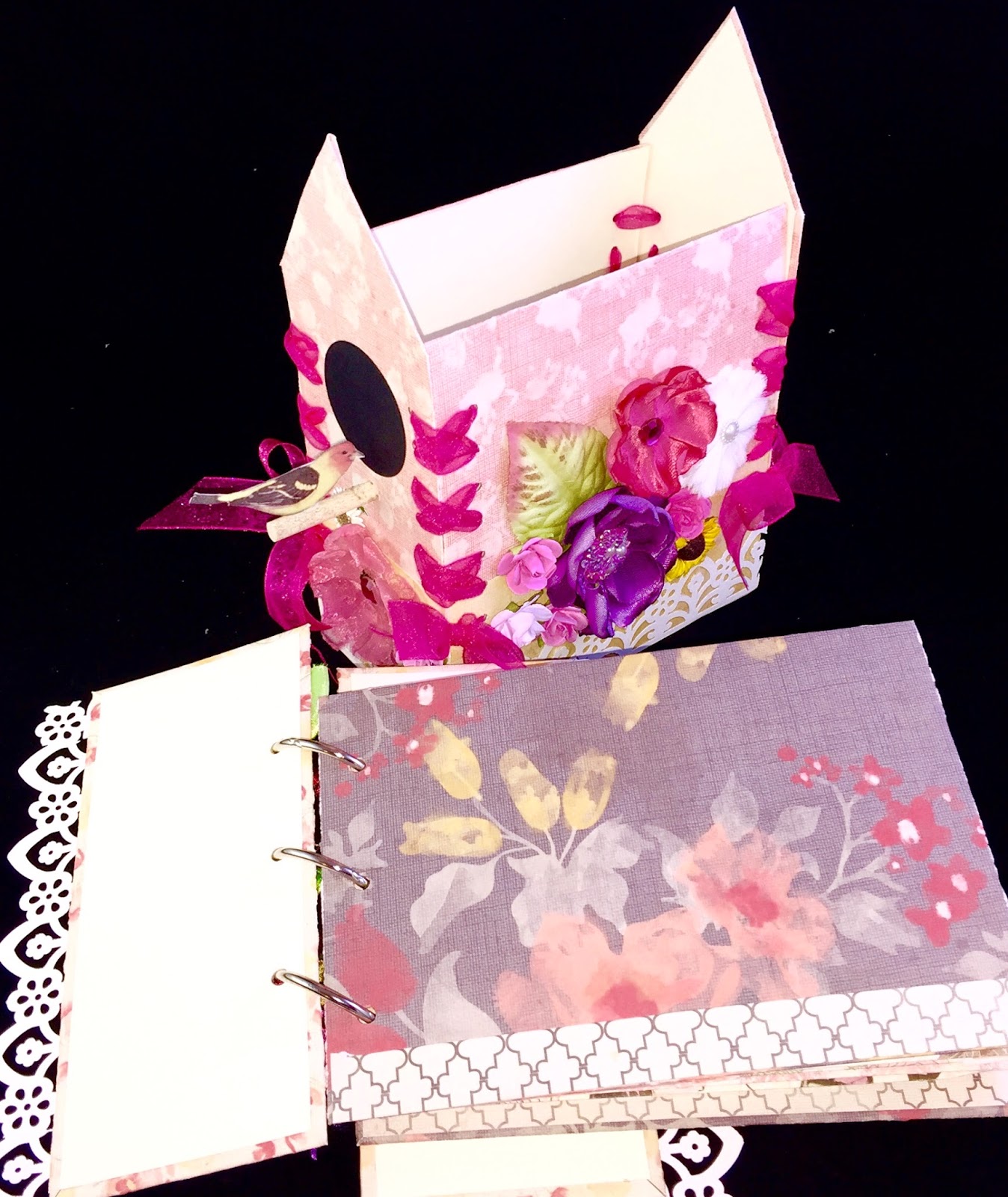 Ok....before you judge me on my choice of titles, you HAVE to remember that I'm one of these people who are very susceptible to peer pressure. So, when I prepare to upload-which I do to Splitcoaststampers.com, first, I see the title bar that says "Choose a snappy title!" and on days like today, (and no...I do NOT mean 'days I'm sober'...as far as you know) I'm just drawing a blank for a title for this bird house mini album project. Hence the addition 'Of Doom' to the title.

Snappy or not, it's an attention grabber.

This is a tutorial I purchased quite a long time ago and forgot about. At the time, it was too advanced for me. I was still trying to figure out exactly what A2 meant, and what exactly one used 'Glossy Accents' for, not to mention I'd never even HEARD of 'chipboard', never mind how I was supposed to USE it. I'm actually winding down from purchasing tutorials, mostly because I've learned a lot of the basics for creating 3D projects. Purchasing these tutorials was a very inexpensive way to get a little more training in that area.

But at the end of the day, I've GOT to tell you this...if you haven't checked out the tutorials HERE at SCS...which have printed directions AND videos, to boot...and are FREE...I suggest you start here first. I can tell you in all honesty that I've never found a seller yet that can match the variety and expertise in one place than here at SCS!

This birdhouse roof actually lifts off and is a mini album. I made this for my mother-in-law because she loves birds and pictures of her grandchildren. That means that not only did I make the perfect gift for her, I also made sure that she'll pretty much side with me in every disagreement with her son from this point on.

I'll try to get links up on my blog in a bit...I wanted to make sure to get this posted because I have some very important things to do today. Mainly sleep. Mostly because my husband has started to snore...due to a promotion at work and working from home til he's so exhausted he can barely keep his eyes open. But before you pity him, remember it's ME who isn't getting any rest. And I'm pretty sure it IS all about me.

Of course, the DH really isn't getting quality rest either. And it's not due to overwork, or the fact our 8 year old has STILL not left our bed and is roughly the size of a Great Dane...one that likes to sleep stretched out between us with feet on the DH and head buried under MY pillow...no, it's not any of that. It's actually due to my having to 'nudge' him with my foot when his snoring gets so loud that I have to wake him up.

NOTE: There's a bit of dissention between us over the definition for 'to nudge'. I maintain I merely nudge him with my foot. The DH claims that a 'nudge' should NOT end up with my big toe leaving bruises on his thigh.

Anyways...I'm done here. Hope you enjoy the project and let me know if you have any questions. Not that I can answer them, necessarily. But I think it sounds good to offer. heh heh

Tutorial can be purchased from lauradenisondesigns.com I am in no way affiliated with LDD in any way other than a customer, and I get no incentives from her, or any place from which I have purchased tutorials in the past. I will always disclose when and if I am receiving incentives from any company. Don't get me wrong...I TOTALLY want companies to throw me incentives and I'll be GLAD to advertise the you-know-what out of them!!!!! I'm just letting YOU know that I'll tell you if that BLESSED day ever comes. Trust. Peace out. ;)

I've been MIA for awhile....but you've GOT to understand....I SWEAR I've been busier than a one-armed paper hanger!

**NOTE** When grandma and grandpa used those sayings, they gave a really good mind visual as to how busy they were. Today, it just sounds so....well...crass? Wow. It's a REALLY good thing I don't give a rat's behind about being PC, huh??

When I began crafting in December of 2012, I had no idea I'd be sitting here, 2 years later, covered in sawdust from my Dremel and bereft of my gel tips (because I kept knocking the &*&% things off while messing around with chipboard and metal) and whining...I mean, 'blogging', about being busier than an "upper extremity/phalanges" challenged person.

You'll see all sorts of things I've created since October that aren't here on the ol' blawg! Why is that, you ask?

Because the majority of my creations have been as a member of the Splitcoast Stampers Dirty Dozen design team, all all the info/tutorials, etc. are for Splitcoast fan club members! That's right...the people that pony up a WHOLE TWENTY_FIVE DOLLARS A YEAR to have access to all sorts of awesome tutorials, templates, sneak-peeks, special challenges and everything a growing artist will ever need.

When I joined Splitcoaststampers.com 2 years ago, I immediately joined up. The main reason was because it's a place where a whole lot of talented people were available to help me grow as an artist and, while SCS is free to anyone, that 25 bucks I paid was a commitment to ME. To MY growth as an artist and MY commitment to art. Besides, it was a small amount to pay to support a site that gives more tutorials and support than thousands of dollars in art classes. Seriously. If you don't believe me, just sign up for free and check it out.

Now, while 99% of the other girls have the wherewithal to juggle DT duties, their blawgs and other challenges, yours truly isn't quite that talented. Coming up with and putting together six projects in 3 weeks (before having all of 5 or 6 days before the new theme and it starts all over) is one of the most demanding DT requirements I've seen. And I love every minute!!!!

My projects are pretty time-consuming (as you will see when you GO TO MY PINTEREST ACCT!) and until my stint is up in March (I swear...this 6 months has flown by) I may just pop in here and there to say hi, OR-if I'm lucky enough to be chosen for another DT, I can resume regular posting since my DD days are coming to an end) but don't think for one second I've gone anywhere.

Whew. I feel so much better now that we've had this talk!!! I'm sure that you feel the same. All 5 of you.

I'll sign off now so you can GO TO MY PINTEREST ACCOUNT, which I'm SURE you've been dying to see. And if you haven't, just keep that to yourself and let me wallow in my normal, delusional state. MWAAAAAAH!
Posted by papercraftgoddess at 12:45 PM No comments: