The Angel On My Shoulder...

...is apparently even more fashionably challenged than I am.

And yes...that statement includes that ill-fated year of 1984, when I wore lace that covered one eye, and had that mishap with a garter that left me with a mark I would lie about for the rest of my life.

Okay, Okay. So maybe she's NOT as badly dressed as I thought she was, originally. I can't compare her to that time in my life when I thought it appropriate to pay homage to Madonna and A Flock of Seagulls...at the same time.

In fact, with that very Catholic looking lace veil, and the torn laces and ribbon, she....

She looks like she's paying homage to Madonna and A Flock of Seagulls.

But at least the BELL is a new addition, people! 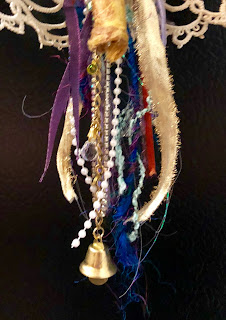 Let's move on. Because the LAST thing we all need is for any 80's song to get stuck in our heads. Like "Danger Zone" or the dreaded "Everything I Do" (or ANY Bryan Adams song, for that matter. I hope you all remember that it was this whiny Canadian that opened the door for the Justin Bieber's we have today. I hope you're happy with yourselves.)

This project was the result of my taking Deryn Mentock's "Angels on High"
class. She has a plethora of classes (including the Bezels class I've been BEGGING her to open!!) at her Something Sublime website.

I won't go into detail regarding how they're made, but a beginner will have no trouble with this class! And while you have a choice as to what kind of face your angel will have (or whether it will be Christmas, Halloween or any holiday in between) I chose to use these little porcelain doll heads (not expensive on etsy...ranges from 8-20 dollars.) because I want to give these as special heirloom gifts to my doll collector friends.

As a side note, you see that 36/0 incised in her head? It's an unidentified Antique German Mark. I believe the number 36 is the mold number. Not sure what the 0 is for. If I've screwed any of this up, please correct me!! 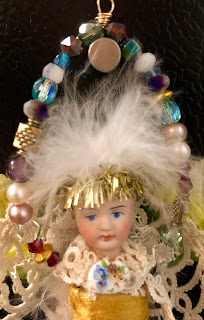 Since the top of her head was missing, I gave her a little Boa action, stuck right inside. My having immediate access to something like a boa shouldn't be surprising...the Queen of Fashion Tragedy always has boas and sequins ready to go...not to mention lace. But NO garter elastic anywhere. I'm seriously PTSD when it comes to that. I go into histrionics at the sight of them, which makes me the worst wedding date ever. 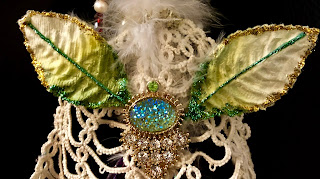 I jazzed up the back, mostly to conceal the fact I can't sew worth a darn (pun unintentional, but necessary. I can't cuss in the house anymore. That story coming soon enough) and I didn't like how the back of the wings looked, so I went to my trusty Stickles. My worst nightmare is Ranger deciding to do away with the Stickles line. Makes my garter scar hurt just to think about it.

Please check out Deryn's page. I've taken 3 classes...the salt shaker snowmen the Boho Bliss (will put my things that I made in an upcoming post!) and this one. You will NOT be disappointed. And ANY BEGINNER can take these classes! Just expect to practice (esp. Boho Bliss) in order to produce beautiful things.

It's good to be back, friends. A post on my absence is coming soon.

I hope both of my subscribers are looking forward to it!

Posted by papercraftgoddess at 8:21 PM 3 comments: 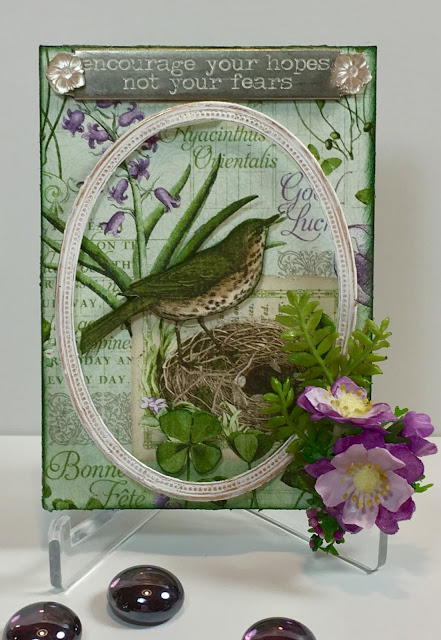 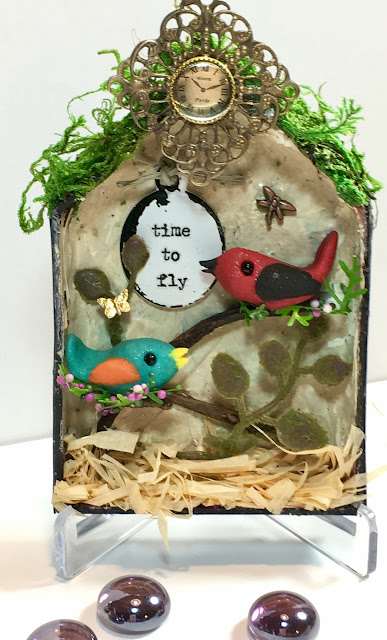 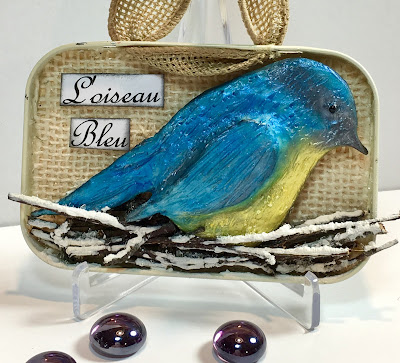 It all started with eggs.... 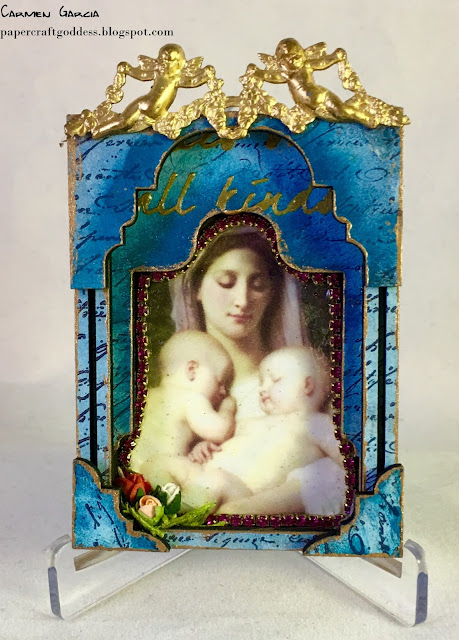 When the theme for February's Blissful ATC swap was posted (Blended Backgrounds) I had originally thought to make another Faberge Egg ATC, that I learned from the terrific tutorial HERE at Laura Carson's artfully musing blawg. 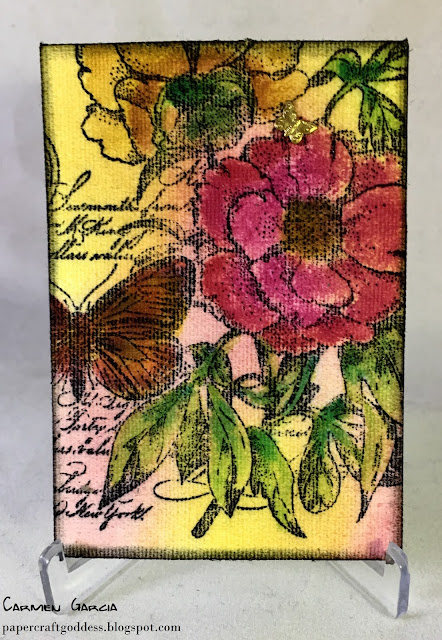 I had originally planned to title this "Hopelessly Devoted to My Eggs". Personally, I thought this a wonderful title! Until my husband wandered into my craft...I mean my 'Art Studio' (don't laugh...I bought a SIGN that says it, hanging above the door) and started reading this over my shoulder.

"You like your eggs?" he said.
"I do," I said, trying to sound pleasant while mentally restraining myself from elbowing him in the gut to get him to move out of my personal-PERSONAL space.
"Do you still have eggs? I mean, at YOUR age?"

I counted to 50, all the while thanking the Lord that the loaded handguns were under lock in the upstairs safe and not still in my purse.

"Is that what they call them? I thought it was fallopian or something." he squinted his eyes, as if trying to have an intelligent conversation.

"You really need to go watch TV." I said.
"There's a commercial on Fox and Friends." he whined.
"There will be plenty of those to deal with. But I'm pretty sure that the little hottie that is Ainsley of Fox News and Friends is worth a few commercials. I'm pretty sure she doesn't like a quitter."

Have we ever reached a consensus as to why, no matter where we are in the house or what we may be doing, our husbands periodically wander into our personal space and just stand there without a word until we snap "What do you want??" Then, with a wounded 'nothing' or 'what's wrong with you?' they shuffle out the door? It drives me MAD when my husband does that! What does he think I'm doing? Having some kind of spicy 'chat' with a handsome, wealthy Castillian Spanish hombre' who is just shy of 30 and has never been in love with anyone...until ME?

CRAP. Now, I'm going to have to write my mother yet another of my apologetic emails, and include an extra hundred punishment lines:

Point is, I'm crafting. Or shopping.

PAM: (pre-adderall moment) For the record, my husband would be fine with my saucy repartee' with Don Carlos, as long as it curtailed my shopping. Seriously. I've got some real problems with this. I noticed it the other day, when I counted 4 pieces of relatively large mechanical things that you're supposed to plug in a wall and turn on. I don't know what they are, and I'm afraid of plugging anything in unless I know it won't jump off a table and run around, chewing up art supplies and children's toes (not to mention MINE) on its rampage. So there they sit until they can be identified. It's pretty bad, people.

But back to the original question: What is it that drives our men to circle us as if caught in some gravitational pull they can't break free of? Your responses and advice would be greatly appreciated and you'd probably better take a moment and help a sister out.

Otherwise, I'll be calling YOU for bail money. 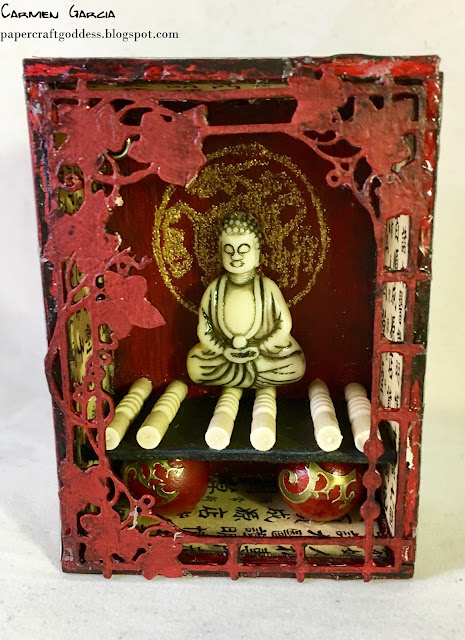 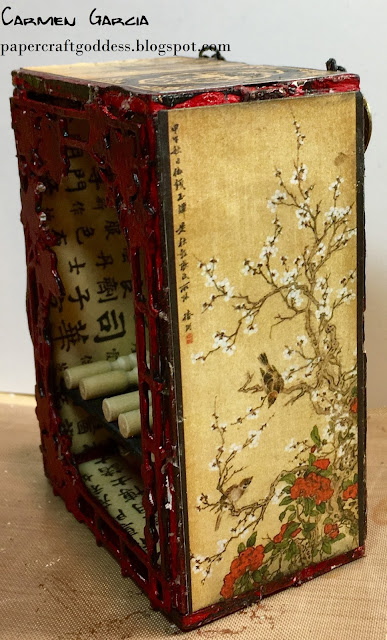 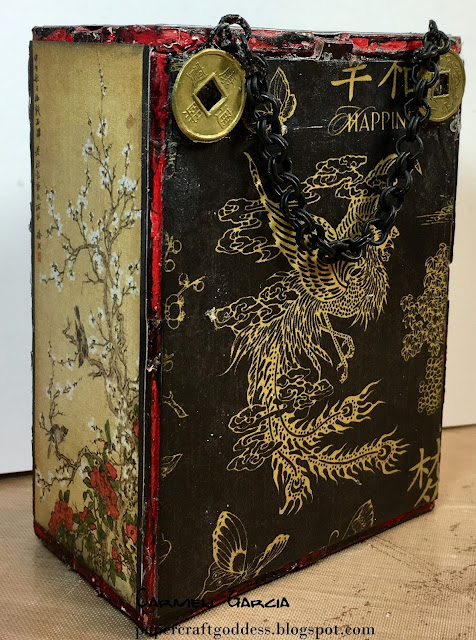 Posted by papercraftgoddess at 11:11 AM 2 comments: