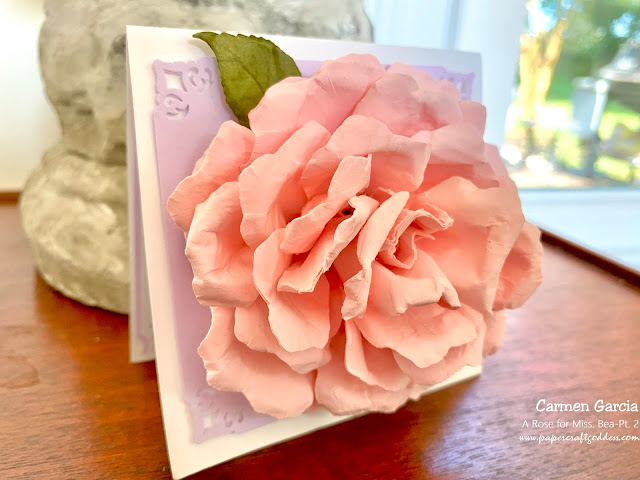 Oh, come on now...did you REALLY think this was going to end with me NOT cooking up the most fabulous rose I was capable of making to give to a 99-year-old woman???


Not that you'd be wrong in thinking that I fought starting the whole project tooth and nail. THEN, when it turned out like this, it sat in my studio for 5 days before I sent it! I almost didn't!

To FULLY understand this post, you must read part 1. Oh. You didn't. Didn't have time, huh? Ok. Well, let me recap part 1 for you so you'll be caught up.

And we're all caught up!

I went digging for rose punches and dies. I stumbled on Susan's Garden Rose Dies by Sizzix that I'd never used.

I'll start by saying that while it's not brain surgery, you do have to build it petal by petal. Every petal needs to be shaped and rolled with tools, including tweezers. It takes time and, if you're like me and cuss like a sailor, then you can't work on it on a Sunday.

I decided to stay with a simple, pink rose. I always use a heavy weight paper for my flowers. SU! 85 lb is a staple. I'll shape the petal, then spray it with water and shape again then let dry. When all the petals are assembled, I go back and shape some more, then I spray them with at least 3-4 coats of acrylic spray (in the garage!!!) that has just a bit of shine to it. Then I shape again and let dry.

Laugh at everything due to unintentional inhalant high

Refuse to part with project because it turned out so nicely and dang it! YOU WANT TO HOLD ON TO IT AND SHOW IT TO YOUR MAMA!!!

But never fear, it's now out of my life and into Miss. Bea's. And in a way, I'm kind of glad it's gone. Because I can totally forget I made it and slip back into the default position of "I don't do roses, sorry." 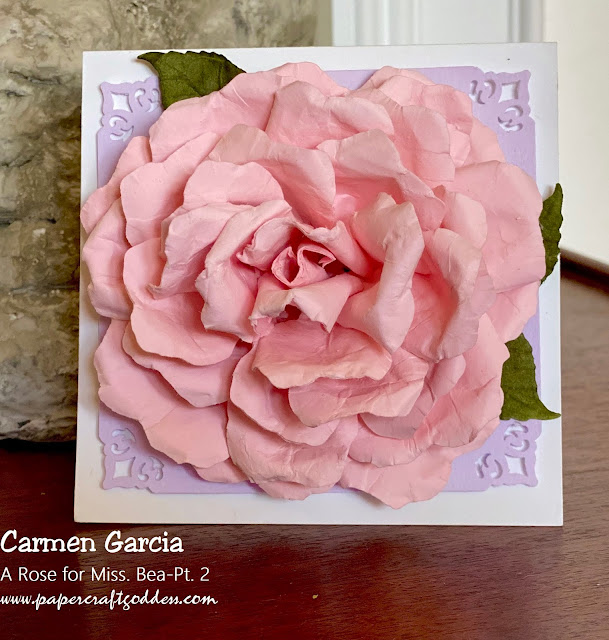 Posted by papercraftgoddess at 3:55 PM 3 comments: 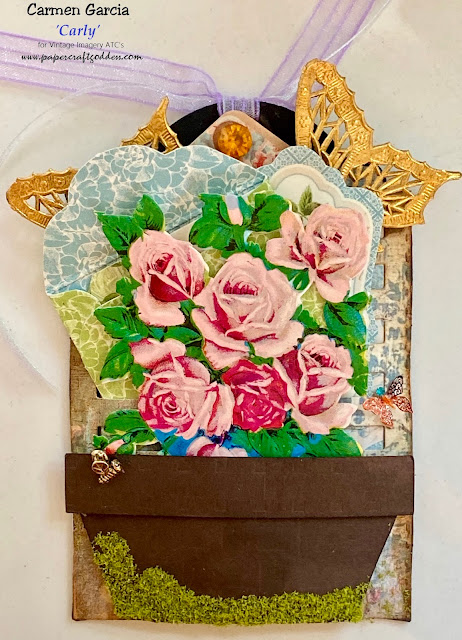 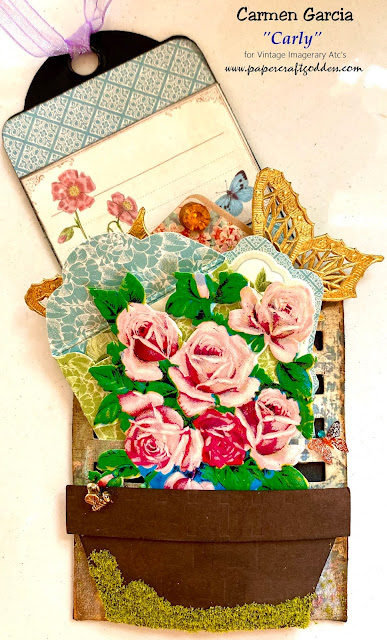 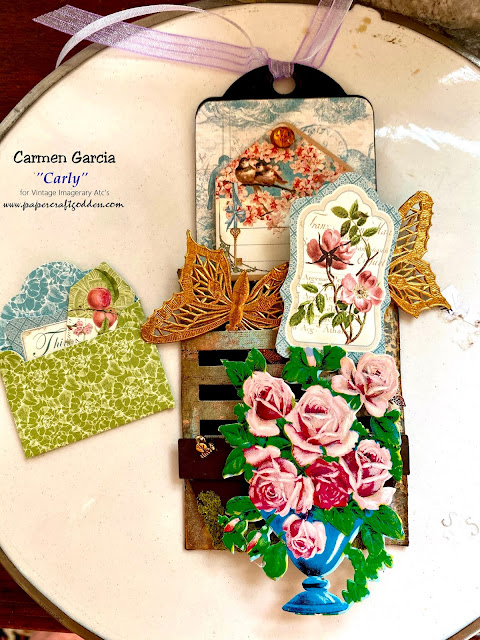 To be fair, I didn't think I was gonna like these little suckers AT ALL.
The very talented and VERY patient Laurie over at VIA sent us these cut outs from the Tim Holtz dies and said "have at it".
Like I said...didn't know what to do with them, ergo, I did not care for them.
After mucking around a bit, it occurred to me to make the piece a "unit" instead of just random stuff stuck in it willy nilly.
I used a very old piece of scrap-close to a century, I'd guess-to form the idea. Which was the roses in the urn. I glued the slot to make it curve just a small amount so I'd be able to put what I wanted within. I used G45 tags, notes and envelopes. I used another tag at the top I covered with G45 (all from Botanical Tea) and left journal spots (not shown)
The butterflies, also a century or more old, are actual Dresden and were stamped from the moulds in Germany. I was given several sets of Butterflies, Eagles and Asian Samurais from a generous friend and try to pass them on when I can.
I think it turned out nicely. Weird how the things you think you like are the things you struggle with the most...but things like this I think on which I'll crash and burn?? Hmmm.
Or maybe it's just medication time. Who knows?
Posted by papercraftgoddess at 2:05 PM 1 comment: 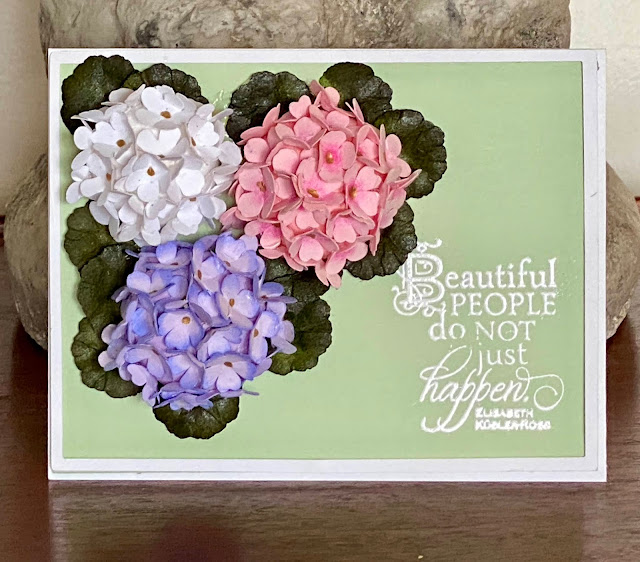 This Begonia card is one I made for a certain Miss. Bea. This lovely lady is the mother of a close friend of MY mother. I've never met Miss. Bea. But when mom asked me to make a card for her birthday, I said okay.

I didn't even get uptight at my mother's standard 2-day notice. LORD that drives me INSANE.
But there's NO WAY you can get too aggravated when you find out that the card you're making is going to a woman who's turning 99-years-old.

I can't imagine living that long!

Think of what all she has lived through! Not to mention how long she's lived with her children!

Sorry. But I'm 52 and my y-chromosomes have already driven me bat sh*t crazy. Living another 47 years with them and I'll be committed before I draw Social Security.

By choice. But enough of that nightmare, already.

I told mi mamacita I'd make the flower card. I asked Ma what Miss. Bea's favorite flower was and mom said "She loves roses!"

I said, "Great! I'll get started on the Begonias right away!"

Look. It's NOT personal...I swear! It's just that every single time I've attempted a rose, be it via punches or dies-especially those little spiral rose dies-there seems to be a conspiracy against me. I've never...and you can check this blog from start to finish (oh, please don't do that. I created this blog and the thought of doing that makes me want to cry with sheer hopelessness. Seriously.) and you won't see a rose worth its' salt.

But I knew I could knock out some pretty good begonias with my McGill punches, right? I hand colored and shaped each petal, the leaves have the right shape and shine, the colors will never fade, the sentiment is right, I mean, this is a really good card! One that I'm sure she and my mom's friend will love! I know this with all my heart.

But she wanted a rose. And this isn't a rose. While this will reach her on her birthday, shouldn't I try just once more? As if in answer, I was organizing my dies and stumbled across a forgotten about die from Susan's Garden. I have quite a few from her that I've used many times. Except this one. And yes. It's a rose.


Posted by papercraftgoddess at 10:15 AM No comments: 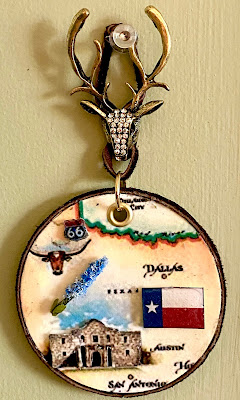 Vintage imagery ATC, my swap group over at swapbot.com, came up with a Road Trip coin swap. ATC coins are 2.5 inches and they've been very popular lately.

I want to start by saying that my family never, ever went on road trips when I was young. In fact, the longest car trip we ever took was a designated point A to point B one. Point A being our front door and Point B being Anna Maria Island, Florida. Which, I might add, couldn't be reached by I-95 back in those days. It took 2 hours longer to reach, as we had to make the trip on I-75.

That trip was also made in a two-door, sub-compact Toyota Corolla, with 4 people and no air- conditioning. As this was a yearly trip that my father insisted on making in one fell swoop, I, always the little wordsmith, quickly mastered the pronunciation and definitions of "patricide" and "matricide", along with figuring out whether or not I could actually be charged as a minor.

Ok. I'm just kidding. I just fantasized about throwing a tantrum and forcing them to buy me a Barbie and Ken Swimming Pool to play with on the way down. At least there'd be someone finding relief from the misery.

So I have to say that I’m grateful the whole road trip idea never occurred to my parents. Since they both worked, I’m not really sure how it would have worked anyway. But good Lord I’m sure glad it didn’t.

Back to the Road Trip thing...I DID say this whole thing was imagined, right?

I decided to work with the states in which my swap partners were located. First, there was Texas. I found a background using an old vintage whimsical map and enlarged Texas. I printed it twice and cut the Alamo Route 66 image to pop up over the original. I printed the Texas state flag and, using flower soft, made a poor man’s copy of the Texas bluebell which is the state flower. I used a soft leather around the sides and, taking a long horn pendant I found in my stash, used it to act as a hanger. 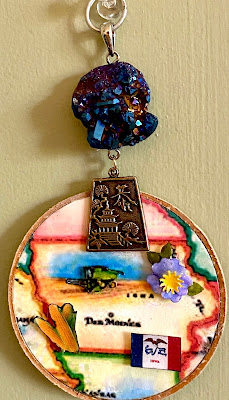 For Iowa, I cut the harvester and popped it up. I printed an image of the state flag and some corn, for obvious reasons, and re-created a miniature prairie rose, the Iowa State flower, using my McGill punches. The Asian emblem at the top signifies the numerous Asian sister cities that Iowa shares with many different Asian countries. Last but not least, Iowa's state stone is the geode.

Now, many of you may be looking at one another and saying, “But, that looks like anything but a geode!”.

This would not be a very nice thing to say. So take it back. Right now. Because after searching Michaels and Hobby Lobby (to include their Clearance sections and you KNOW how long that takes!) for all intents and purposes this is a #*%^*}% geode.

Forgive me for zooming off into that good ol' worn out section of left hand field again, but every time I look at that Iowa State flag I keep seeing a face and it drives me a little crazy. ER. Sorry. Let’s move on.

Actually, there’s nowhere to move!! I actually have more art than posts. Can you believe it? I  have at least THREE COMPLETED ART PROJECTS just sitting here waiting for me to post them! Will wonders never cease? Will these miracles continue to happen? When did my meds decide to wake up and actually go to work instead of lying around on their asses all day watching Netflix?

Well, at least walk a little faster than usual. You know, the one where your entire foot leaves the ground with each step?

Talk about a Road Trip waiting to happen, huh?

(In terms of the most awful ending lines I've ever written, this one takes first prize. So, enjoy it. Savor it. Embrace it. Pet and stroke it and...hmmm...that's completely awkward. Just appreciate it, why don't you?)