Of (Drag) Queens, Charity and Millennials. WARNING: Spicy Post Ahead

A warning, Gentle Readers. I was particularly manic during the creation of the following post. It may be a bit on the racy side for many of you. I thought about not publishing it. A first, for me. But then, I had this romantic notion (read: delusional moment) where I thought you may actually like this part of my personality that no one has been able to medicate into obedience. If not, oh well...it sounded good to me.


To start with...No. It's not time for the Pride Parade. Although, I have to say it would interesting to do a mixed media project on those Queens!

But, let's face it...there aren't enough sequins and feathers in existence to get me through project like that.

What I am talking about is the beginning of my mixed media Parade of Queens. First, I give you
HRM Queen Victoria.

I chose her first because during the Blitz in WWII, London was destroyed almost beyond recognition. Buckingham Palace was also hit and badly damaged. As soon as it was over, Queen Victoria headed out to the streets, talking to and encouraging people. She said she was "glad Buckingham Palace was hit so they all could share the burden." 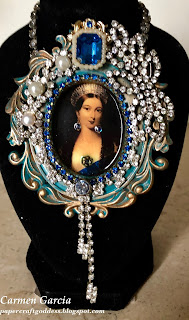 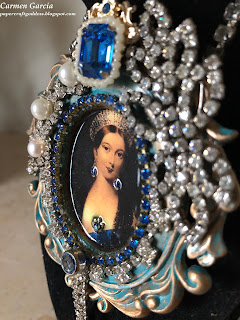 All this consists of is a resin covered image and Swarovski crystals, along with broken bits of vintage, costume jewelry. The frame is a cheapie from Michaels or Hobby Lobby. I used a bit of solder and sterling wire, along with my trusty friend "E6000" and Tally Ho!

And yes...I cringed a bit when I typed "Ho". Good LORD...the Millennials with their militant PC, and Safe Spaces are killing me.

PAM: (pre-Adderall Moment. As a refresher, this means I'm writing before the Adderall kicks in and keeps me focused. It's also a warning that I'm either going down a rabbit hole or saying something that just might get me reprimanded. Or both.)

Millennials. They drive me insane. I was in radio for 25 years. I hosted a great number of benefits during those years to raise money for community based charities. I always performed comedy bits as emcee', as well.

One benefit featured an evening with "celebrities"; those being drag queen performers. The very first one I hosted, I was backstage and was actually shown what happens UNDER the dress. Suffice it to say I had NO IDEA you could put...um...things...there...with TAPE.

I admit...I was really impressed. So, my comedy featured several bits about...well...bits...and another about gay men, in general. I won't go into the actual bit about drag queens. I'm afraid I've already violated a few rules here and I feel guaranteed that a call from my mother is in order, as it is. But with gay men, I ended with the line "I LOVE gay men! I think every woman should own two."

The last time I did this bit, I was accosted by a host of Millennials who said my humor regarding drag queens was "belittling" and that I was endorsing slavery with my (fabulously funny) part about owning gay men.

Now, I couldn't swear to it, but I might have replied something along the lines of too bad it was their humor they taped up their a** and not...well...I'd probably better stop here.

But remember...this PAM is NOT MY FAULT. The fault lies with the little Snowflakes who have nothing better to do than earn their PhD's in basket weaving and circle sharing.

Oh boy. I haven't even hit the post button yet and I'm already so far off base I should probably chuck this entire entry. But that would be a LOT of wasted writing. Besides, I've already driven right over the cliff...no point in letting off the gas now.

The second piece in my Queen series is good ol' Marie. And I don't care what ANYONE says...there was a gay man in HER wardrobe retinue somewhere! 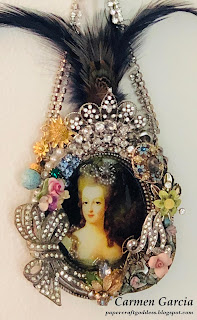 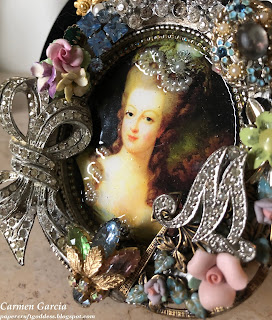 This was also created in the same manner as HRM Victoria.

And as questionable as my content might have been, there was actually a good reason behind my making these!!!

You see, I don't sell my art. I donate it for silent or quarter auctions or any other charity fundraiser if I'm asked.

OR I foist it on hapless friends and relatives.

At any rate, I decided to make these creations a little more "official" looking. So, I actually ordered a couple of stamps with a name and logo. Aw...yeah. Someone is a pro-fessional now! 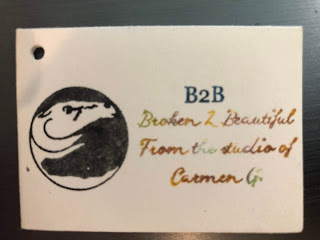 On the inside is my little mantra. Most everything I make uses pieces of broken things. Mostly jewelry, but I've been known to use glass or wings of large (dead) insects. When I can get the boys to pull them off for me. 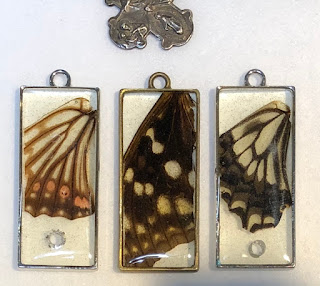 (more on these suckers later)

And then, the vision: 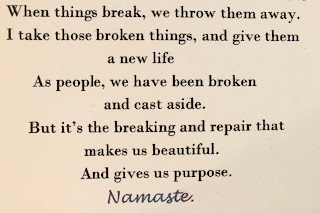 You never knew this side of me, did you? Oh great. Now I'm totally embarrassed.

I've GOT to end this post now or you and I will never get out alive. But before I go, I'll tell you this. I never create the title until the end of a post. I deserve some kind of &*&%^  Nobel Prize for this one.

Attitude: 100% Yours Truly. No way I’d burden anyone else with THAT.

Posted by papercraftgoddess at 12:09 PM