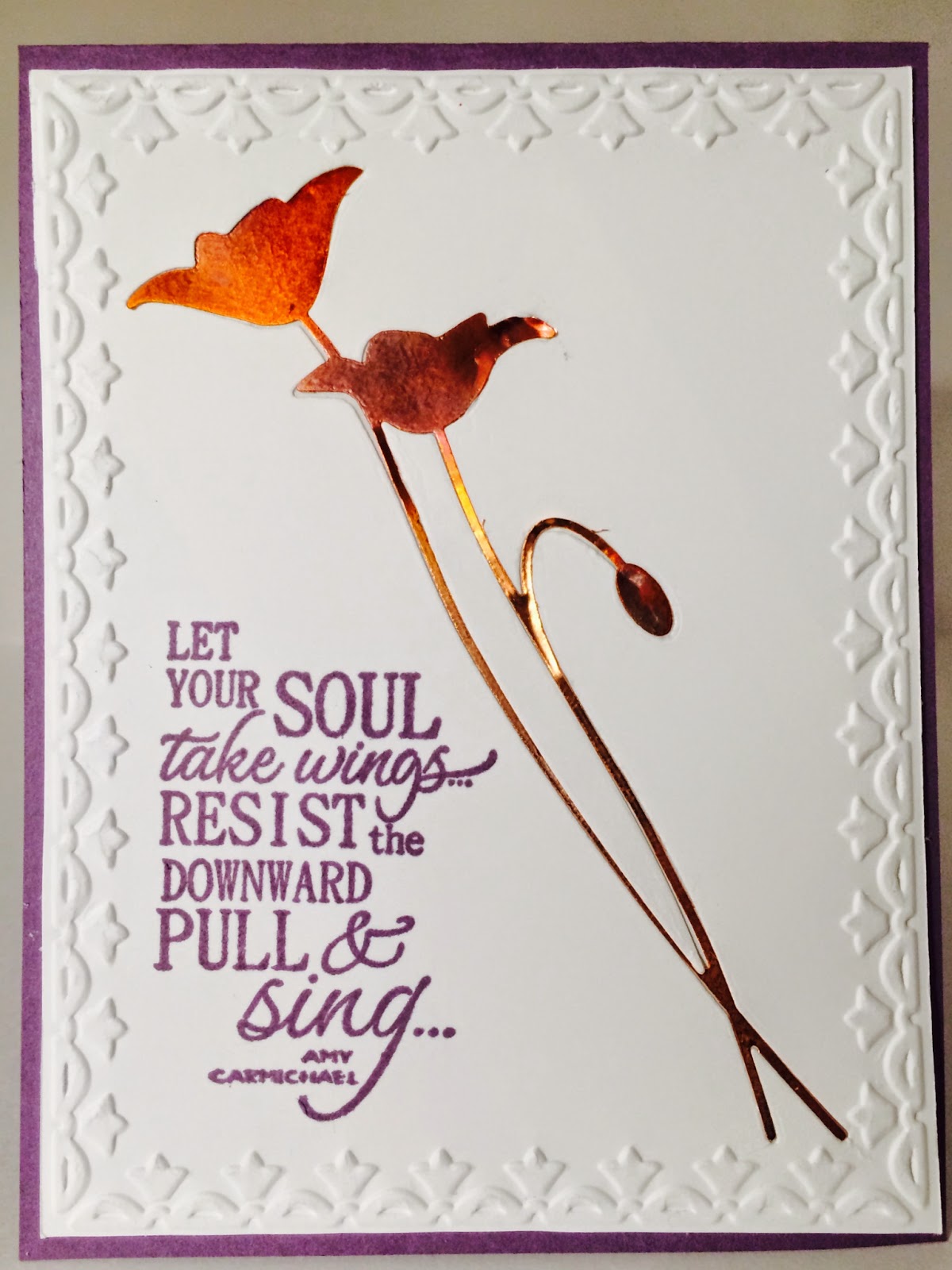 The first question that needs to be asked is WHY, in the name of all that is holy, am I making cards and posting them at 3:35 in the morning? My eyes hurt, my brain is fuzzy and I just want to sleep. Which I can't do. No...it's not insomnia. The reason is much more insidious than that. The reason I'm being pushed to the brink of sanity and my body is officially sleep starved, is due to only one reason: I was kicked out of bed by a chubby 7-1/2-year-old, who sleeps like the dead and somehow manages to double his actual weight when he sleeps...making it impossible to push him to the middle of the bed and make an attempt to claim a paltry 6 inches or so.
I know, I know...and you're absolutely right; I DON'T blame him. Liam is merely taking advantage of sleeping with us which, though unwanted, hasn't been dealt with in this home. So, Liam is innocent. Who SHOULD shoulder all the blame?

You see, when Liam was born, I was 38. At that age, I was mostly too tired to even THINK of procreating...much less actually DOING it and have it result in adding to our family of 5.

PAM: (pre-adderall moment)  It bears to mention that I am Caucasian (not just white...more like 'translucent') and my husband is 'Chicano'. That means he's 2nd generation American from a Spanish/Mexican set of grandparents. Needless to say, after our many years of marriage, we occasionally experience a bit of culture clash. For example, he's STILL mentioning how much he wished we could've had a couple more kids. He says it doesn't seem like home until you have 30 people in a 3 bedroom house.

I don't take him seriously, though. My beloved husband is quite non-traditional in every other way. He's a Marine (inactive) and served in dual branches. While waiting to re-up in the Corps (he wanted to change his MOS to computers and had to wait for an opening...he was convinced they were the next big thing back in 1982 ;) he was accosted by an Army Recruiter who gave him his desired MOS, sent him to OCS and the Pentagon. He left years later as a 1st Lt. with a degree in Mainframe Software Architect. Rolling on down the list of non-traditional, my DH is an avid golfer (with a club championship under his belt. You GO, baby!!!) and a man who isn't afraid to critique his wife's crafts, help her when needed and be a competent handyman. All of this WHEN he's not on the links.

The only real downside is that he's either working or on the golf course. This he does while I'm at home gardening and taking care of the yard. It would figure I'd marry the only man of Mexican descent who hates yard work. I can't seem to get anything right. Sigh.

And he's been stuck in our bed ever since.

Several times, I've TRIED to get that kid out, to no avail. It inadvertently ends with his little ham fist smacking me in the mouth or I'm awakened by him breathing heavily or coughing in my face. Sometimes, I think it's cute. MOST of the time, however, I consider asking my husband to move into Liam's room. Not because it would improve my sleep by freeing up an additional 6 inches or so, but because it would make me feel better to think he's stuck in a loft bed where Legos lay like snipers, ready to lodge themselves into places you'd rather them not, and in a room in which we always seem to find a new species of bug or weevil, every spring and summer.

At the end of it all, I keep the complaining to a minimum and try to grab snatches of rest when I can. As so many have mentioned, it ends all too soon and I'll miss it. I truly believe that. So, while it can make me temporarily insane, I DO admit to many nights of lying in bed with my husband, Liam wedged firmly in-between, and with the bathroom light on but dimmed by the door we've left cracked, we watch him snoring away and talk about our joys, worries and hopes for our youngest one, and vow to work as hard as it takes to prepare him for an independent life as a man with Autism.

Of course, this discussion doesn't take place in whispers...we can pretty much carry on normal conversation as this kid can sleep through anything. Afterwards, we shut off the light and try to claim a few inches of bed space, as my little chunky monkey is stretched out the width of the bed and who is quick to our efforts of attempting to move him with a fist to the eye, or a foot to the solarplexus.

All of which we consider some of the biggest blessings of all.

Copper tutorial by Lols at http://www.stampingwithloll.com/2014/03/copper-technique.html
Posted by papercraftgoddess at 8:38 AM