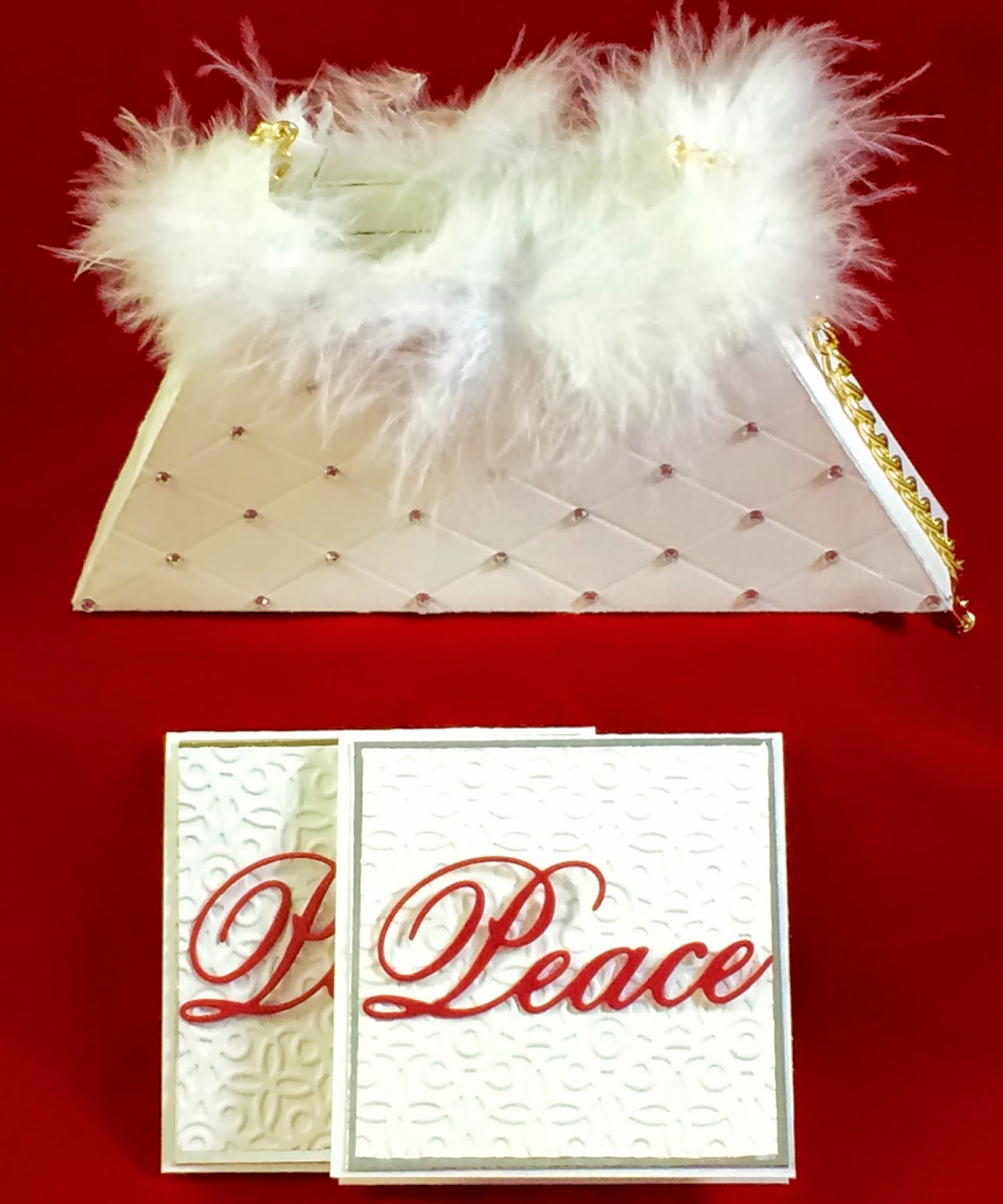 Before anyone gets excited, no animal was harmed in the making of this gift card/ty note purse holder thingie.

A kid or two, maybe, but never animals.

I don't know about you, but I believe in karma. You know, the whole 'what you do comes back to you' thing. And I also believe that our Lord is the one who created it and set it in motion, simply because He knew we were such numbskulls that He'd NEVER have time to do anything else if He had to smack us on the back of our heads every time we did something wrong. It was much easier to say, "Verily, I say unto thee, I shall have your actions return unto you and kick you in the rear-end and that should act as a reminder to get your act together."

I'm pretty sure that actual verse is in Corinthians or something.

Personally, I think it's a FABULOUS concept! Most of the time. Sure, I don't like when I get some negative served up to remind me I was a donkey's behind and that I need to make it right, but overall, it's great. Except for one thing. And I've had many a discussion with God AND Jesus over my ideas for improvement. Needless to say, they haven't exactly made overall sweeping changes based on my suggestions, but at least they're not putting me on hold or sending me to voice mail immediately, anymore.

That means something, right????

You see, think about how incredibly effective karma would be if, when it was served RIGHT IN FRONT OF THE PERSON THAT HAD TO SUFFER IN DEALING WITH THE DONKEY'S BEHIND IN THE FIRST PLACE?!?!?!?!?!?!?!?!

Think about it...a driver cuts you off and acts like a jerk. Under the old karmic plan, that person may have someone else cut THEM off several weeks down the road. Even worse, they may have already forgotten that they'd been a donkey's posterior and think that they're the actual victim in all this.

Under my new and improved plan, we would see instant karma take place, bringing a sense of pleasure to the victim and serve not only retribution to the perpetrator, but it would leave no doubt as to what they've done AND have to suffer the embarrassment of having the rest of us pointing and laughing.

How effective would THAT be??

Needless to say, I believe my Father and Savior are finally taking this idea seriously, and I'm hoping for a trial period.

Because I can tell you that, after suffering for YEARS by stepping on my 8 year old's Legos for years, (usually while rushing through the house to grab a ringing phone or deal with something that needed immediate attention) and winding up on the floor, clutching a foot and howling, it did me a WORLD of good to see this kid step on my stamp a ma jig and, while hopping around yelling, stub his other toe on my door.

Don't look at me like that! I made sure he was fine! And by that, I mean I watched him and asked if he was okay BEFORE bursting into laughter. So, see? I'm not THAT terrible a parent!

But let me assure you that I launched into "AHA! THAT'S what you get when you don't pick up your legos like Mommy tells you! Now you know how mommy and daddy feel when they step on an entire series of Legos just trying to get to the bathroom at night! NOW you know why mommy threatens to throw all your legos away! Now, where is your father? If karma is in the house, he's got some payback coming too!"

By that time, he was over it and staring at me in that way that left no doubt as to what a donkey heinie he thought I was, and he left.

So, you see? This isn't such a bad idea! And as long as it doesn't apply to ME, I can't wait to see the ball get rolling on this!

NOW...to the important stuff! This purse template can be found HERE on SCS http://www.splitcoaststampers.com/fo...103-post1.html I scored it and used rhinestones for sparkle, along with a simple gold chain for a handle. I glued the fur trim onto it, and made the little 3x3 cards with embossed white paper mounted with scotch mounting tape over plain white cardstock, with only the 'Peace' diecut attached with glue dots. Great for gift cards or small notecard set!

I'm entering this in CAS303 Holiday Sparkle challenge, as I'm not ONLY working on my CAS presentations, but it's the only badge I haven't gotten yet and my OCD won't give me a moment's peace until I do. heh heh


Posted by papercraftgoddess at 4:54 PM