Back Down to Earth with Bentley 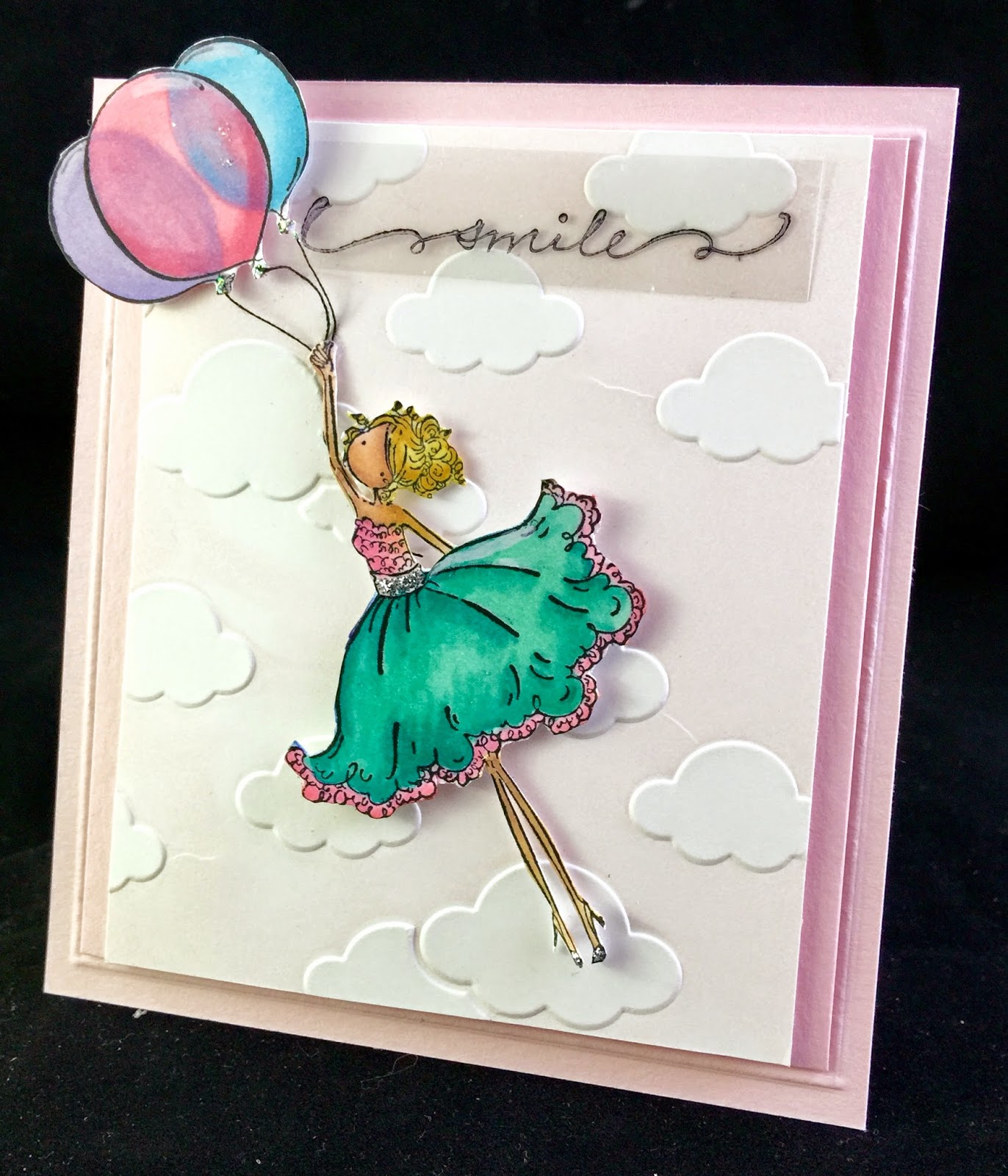 It was supposed to be my FIRST foray into CAS with Freshly Made Sketches in months. And it WOULD have succeeded....had it not been for black thread, Bella herself and an accidental amputation.

Let's face it...CAS and I aren't well-acquainted. There aren't many surfaces that I can resist embellishing (aka 'Junking Up') but knowing that it may just be a genetic impossibility for me to produce a CAS card, I probably should just throw in the towel and be done with it. But I can't. Why? Because of the buttons.

I LOVE her girls. I can't resist them and have quite a few. I got Bentley a few weeks ago and thought I'd color her up real purty and stick her on a white card with no embellishment...just a simple sentiment on vellum.

I stamped her with my trusty Memento, and went to coloring the balloons. The transparency coloring was a thing I hadn't tried, and it took 3 times to get it right. Happy with the look, I went to color the rest of Bentley, when I noticed black smudges on my pristine white paper. In spite of heat setting the ink, it smudged!!! Never mind that this had NEVER EVER happened in the past...I couldn't believe it had let me down when I needed it the most!

I was already having enough problems trying to repair my relationship with my Copics...we had become a little estranged since my joining the Dirty Dozen here at SCS and I promised that I would try harder. And it was going so well...

But, unwilling to chance trying the transparency thing again, I went with plan b and decided to fussy cut.

I'm not sure what Bella has against fussy cutting, but successfully fussy cutting one of her girls, especially, should come with some national award. I already knew I'd have to sacrifice the balloon strings (and had black sewing thread at the ready) but what happened next was totally unprecedented and remains a mystery.

I don't know HOW it happened...my scissors weren't even NEAR her arm, when the next thing I knew, Bentley's balloon string holding arm had been neatly excised just above the elbow.

But being the professional I am, I quickly grabbed my glue and carefully grabbed the separated appendage with my craft tweezers. With the dexterity and skill of a world famous surgeon...well...sigh.

Panicked, I searched for the sliver of arm I'd colored to no avail. Unwilling to admit defeat, I grabbed a previously stamped image, colored up the arm, and reattached it.

By this time, I really started to feel that I should use the cloud EF but felt it too plain. I embossed another with Pink Pirouette ink brayered onto the folder so the ink would give a subtle, pink shade to emphasize the white clouds. Then, worrying I was starting to clutter it up, I mounted it on Pink Pirouette paper, then on another sheet that I felt just HAD to have score lines drawn around the mat and it just went on and on and on. At the end of the day, I just gave up. THIS is about as CAS as it's going to get with me.

But don't think for one second that I plan to quit trying....remember the buttons?

Being an over-achiever is exhausting enough...but throw in a tangible reward...in this case, an FMS blog badge and/or the SCS CAS blog badge...and I become a crazy person.

Those two badges have eluded me for some time, and I'm determined to collect them one day. Maybe not THIS day, but one day.

As it is, I'm okay with Bentley. It's not everyday that one can design a matching prosthesis AND repair a relationship with neglected art mediums. That's why I should never be underestimated. heh heh

Thanks for checking in...I'm off to attempt another CAS card for the FMS tomorrow. You can join in, too! Just drop on by anytime...maybe I'll see you there? MWAAAH!

Posted by papercraftgoddess at 8:09 AM