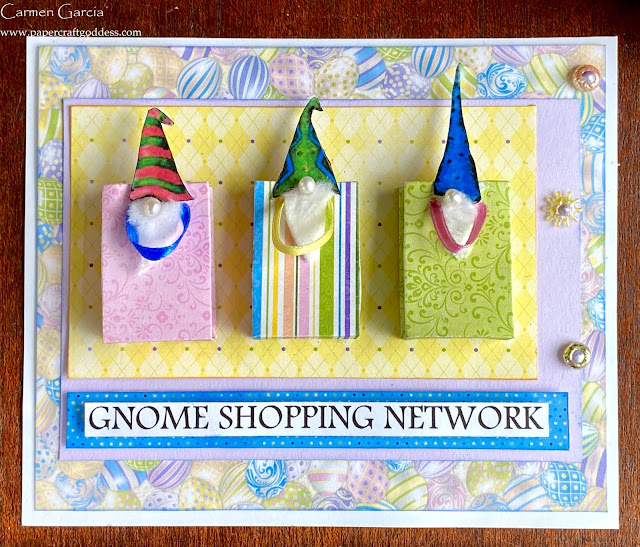 I can't help but believe this is my first Fusion Card Challenge! And I'm so excited to have found them!

The concept at fusion is simple: Use the sketch OR the photo OR fuse them together. I decided to fuse those suckers. 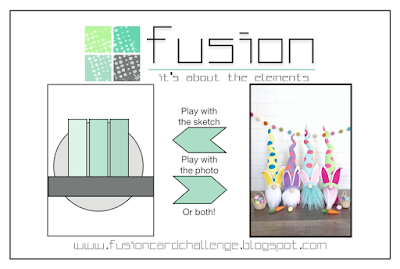 For whatever reason, I had my mind set on using my Memory Box Gift Bag die. I've never made a gnome before but they looked simple. So, I combined the 2 with the most adorable Easter paper I've ever seen! And I have no IDEA what it is!!! I'm so sorry. 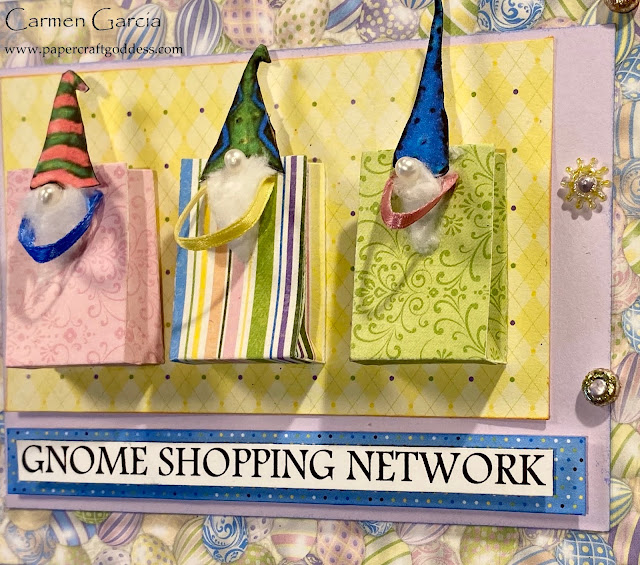 I'm spending the next 30 days working on design. I can build anything or create anything when it comes to building scenes or any of that...but card design is HARD.

I was really surprised I wanted to do this challenge. First of all, the first thing that popped into mind was a sign I saw in someone's garden that said "Gnome Sweet Gnome" and I was done for. See, I hate puns. I hate them so much that, at any opportunity, I'll begin thinking in puns. I'll actually torture myself with them and, being ADHD, there is NO way to stop (or medicate) myself out of it.

The only way to break the cycle is to put on Broadway show tunes.

Seriously. No joke. And I have no freaking idea why this works. All I have to do is slap on "Hamilton", my current fave, and I can rap myself out of any OCD-related repetition.

My kids HATE Hamilton. They loved it at first because it's written in rap and hip hop. Until their female parental unit-who is STILL convinced she was a hip-hop artist in a previous life-decided she would be ready in case auditions were held in Burlington, NC and there was a need for a 52-year-old, slightly chubby, so-white-she's-almost-translucent female who (thinks she) can rap her a** OFF!

Granted, I may miss a word or two if it gets really fast or my timing lags (which is where skipping a word helps me catch up) but there has to be a place for me somewhere on this show.

When it first came out, I practiced like a madwoman. I rapped at every opportunity. I nearly brought my entire household to its knees. They'd clear whatever room I was in if I started rapping about fighting in the Revolutionary War. I'd be halfway through "Hamilton", rapping my heart out about the founding of a new nation while fighting (rap style) with Aaron Burr, as I picked up the middle kid from school.

I can't tell you how many times I caught that kid trying to crawl into other people's cars or hiding in the last stall of the bathroom after school let out. Finally, the guidance counselor met me in the car line and asked if there were problems at home. I told her yes. After an hour of telling her story after story of the rejection I suffered from my Marital Unit and the Y Chromosomes I'd birthed as I worked to make my Broadway dream to join the cast of "Hamilton" come true, she asked me to wait a moment, then ran to find the kid and dragged him to the car. From then on, she was there to shove him in the back before I'd even fully braked. I barely had time to wave goodbye to her before she frantically motioned me to drive on. Not even when the kid's backpack got entangled in the door and I dragged him 50 yards did I have a moment with her.

"Do you need an ambulance?" she yelled, with surprising volume from that distance.
"No," I screamed back, disentangling the kid from the door latch. "Maybe just some bandages and gauze."
"Oh good! I'm glad he's fine. I'm sure you have band-aids at home. Now, move along! You're holding up the line!" She turned back to directing traffic, at a much slower pace now that we'd passed through, I noticed.
I sighed. I was sorry to have lost that sympathetic ear.

As to the moral of this story? There isn't one. Other than it's fine to suffer delusions of grandeur and that one should be required to maintain these delusions when one is a parent. I guess the other takeaway could be when picking up your children from school, try your hand at a little old school rapping. Especially when they hit eighth grade on up.

Nothing like a rapping mom to keep your teenage kid humble.

Posted by papercraftgoddess at 3:23 PM