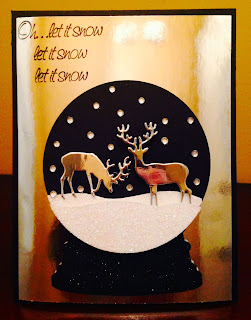 While my numb hands situation hasn't improved, my husband's work in raising my computer AND my work desk is helping TREMENDOUSLY!

I'm apparently on some type of strange, spiritual, completely FOCUSED journey...I'm on the path to serenity and total creative freedom. I have reach Zen, my friends. I believe this journey came due to my desire to surrender completely to my artistic urgings.

Or, I accidentally doubled up on the hydrochodone.

At any rate. mama is having some FUN!!

I channeled Ellen on this one and went overboard with all sorts of reflective material. Wait...that sounds like ELLEN goes overboard when, let's face it, there's only ONE person around here going overboard...) Let me rephrase...I channeled mine and Ellen's love of sparkly things but, par for the course, I went OVERBOARD with the reflective material. The only difficultly was in photographing. I literally had to crouch behind the snow globe to hide the phone and my head while taking a snapshot. I thought I'd never get it done. But I did!! Oh, yes I DID, mah sistahs!

Here's my attempt to channel the brilliance that exists...mostly in MY mind...but it exists nonetheless.

I took two pieces of double sided adhesive tape and put a piece of cardstock on the back. I learned how to do this from Ellen's tutorial awhile back at her blog The Serendipitous Stamper. Here's the link to her tutorial

Then, I took the round globe and cut two rounded pieces from the cardstock, about halfway up the globe. Then I cut the tops to fit together as two snowy hills, took the adhesive off the cardstock and used glitter to cover it. I didn't believe Ellen's claim that you don't use much glitter in doing this but she's right!

I was worried the sentiment wouldn't set on the paper, but I used archival ink and it was just fine. Finally, I mulled over how I wanted the inside 'snow' to look. Finally, I realized that I'd not seen anyone use crystals to date (I'm sure someone has but it's 'virgin' to me, baby!) so I went bonkers putting them all over the globe. I had to reposition one because it looked like my deer was having an...ahem...'accident'...but it turned out alright, I think!


Posted by papercraftgoddess at 10:20 PM