I've been such a slacker!!! Time to pull it all together and tell you about Stamp-n-Storage!!

I want to start by saying that I've been purchasing SNS products since August 2013, and have documented the before and after shots each month on Splitcoaststampers.com. I mean to move it to my blog but I believe that you, dear reader, know that I'm constantly a day late and a dollar short-as the old adage goes-so you can't be TOO surprised I've taken this long. Back in December, I won a 50 dollar rebate in their monthly drawing. I wanted to let you know this for disclosure's sake AND that I have not been paid or prompted to endorse for this company. I'm doing this because I'm proud of my craft room and this company is incredibly special; I really want you to take a closer look at them and put them at the top of your list when it comes time to purchase storage.

Here's some before shots of the nightmare that was my craft room and the crappy storage I tried to make use of BEFORE SNS. 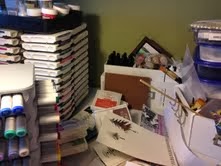 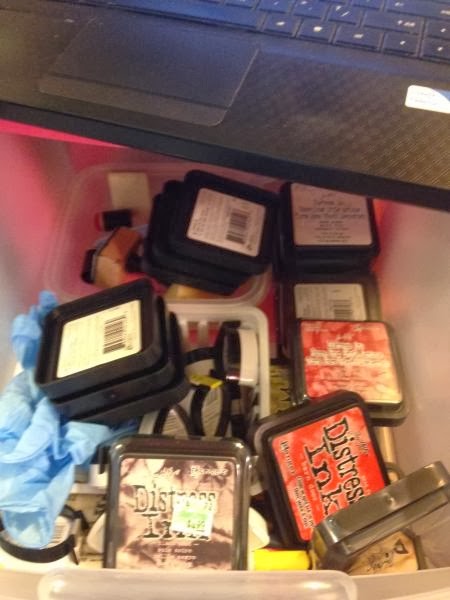 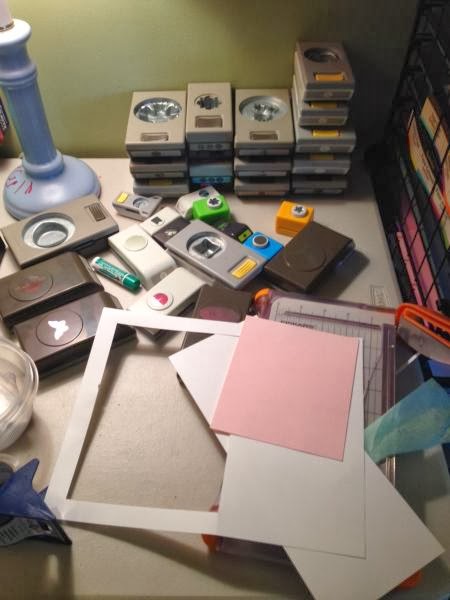 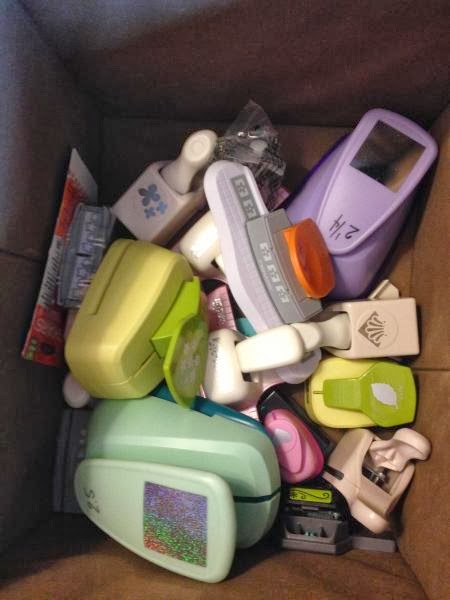 I said that I bet I had Ebola hiding in here somewhere. And tetanus. And a couple of those water bugs. I hate bugs beyond comprehension.

I'd rather have Ebola.

Anyway, I saw SNS in an ad on Splitcoast and it appealed to my OCD nature. Yes. I'm clinically OCD. Not the good kind, where my house is always clean, but the one that makes me rip cards up because something is askew enough to trigger it. I have mini panic attacks when it comes to mounting or stamping...I'm never without my Stamp-a-ma-jig or my dental floss for immediately peeling a paper layer up because of the whole askew thing I mentioned.

So, I ordered my first two pieces from SNS. An ink holder for my Tim Holtz and one for my flat punches.

That's all it took. Here's how it grew over the next 4 months.

(At this time, I set up 2 six-foot tables to my right and moved everything over. It was too crowded to work, even with the organization. Besides, y'all DANG well know I wasn't through!)

I took this in mid-Dec. By this time, I was starting to refine my choices. I knew I needed a ribbon holder for all the craziness to the left. I had also outgrown my Stampin Up ink holder and knew I would not only need one more, but would need to accommodate my growing reinker collection. There was only one problem. SNS only offered this:

My OCD peeps will know IMMEDIATELY why this ink pad combo holder wasn't an option for me. Remember I mentioned needing storage for my ink refills? I didn't say anything about pens. I don't use SU! pens. So here's a quick lesson in OCD...if I ordered this thing, I would go nuts until I could fill all the marker holes with the corresponding markers. It didn't matter if I never used them in my life. Filling them with markers I used wasn't an option because it wouldn't match the ink. Those without OCD are sneering at me right now. That's ok. You can kiss my...OK JESUS....IM TRYING HERE...sigh. It was easier before He and I started talking again. Ok, ok...easier before He talked and I listened.

I call Brett Haugen-he and his lovely wife own the company-and explained my dilemma. He said "No problem. I'll just custom make you one with just the refill holder."

Pause here...yes...I know that the custom job seems less work without having to drill marker holes but I also know that I know NOTHING about woodworking/business/much of anything and the bottom line is that it IS a custom job!. I'm a Capitalist, people. If I order a custom piece, I know there's going to be a premium. I don't have a problem with this. Except that I WAS a little taken aback when he said:

"Nothing extra. I'll get right on it."

As I write this, my craft room is 2 pieces short of being finished. While it's addictive, I have to put the brakes on it eventually because I'll run out of room for storage. That's a conundrum I don't want to play at.  Here's what I have now: 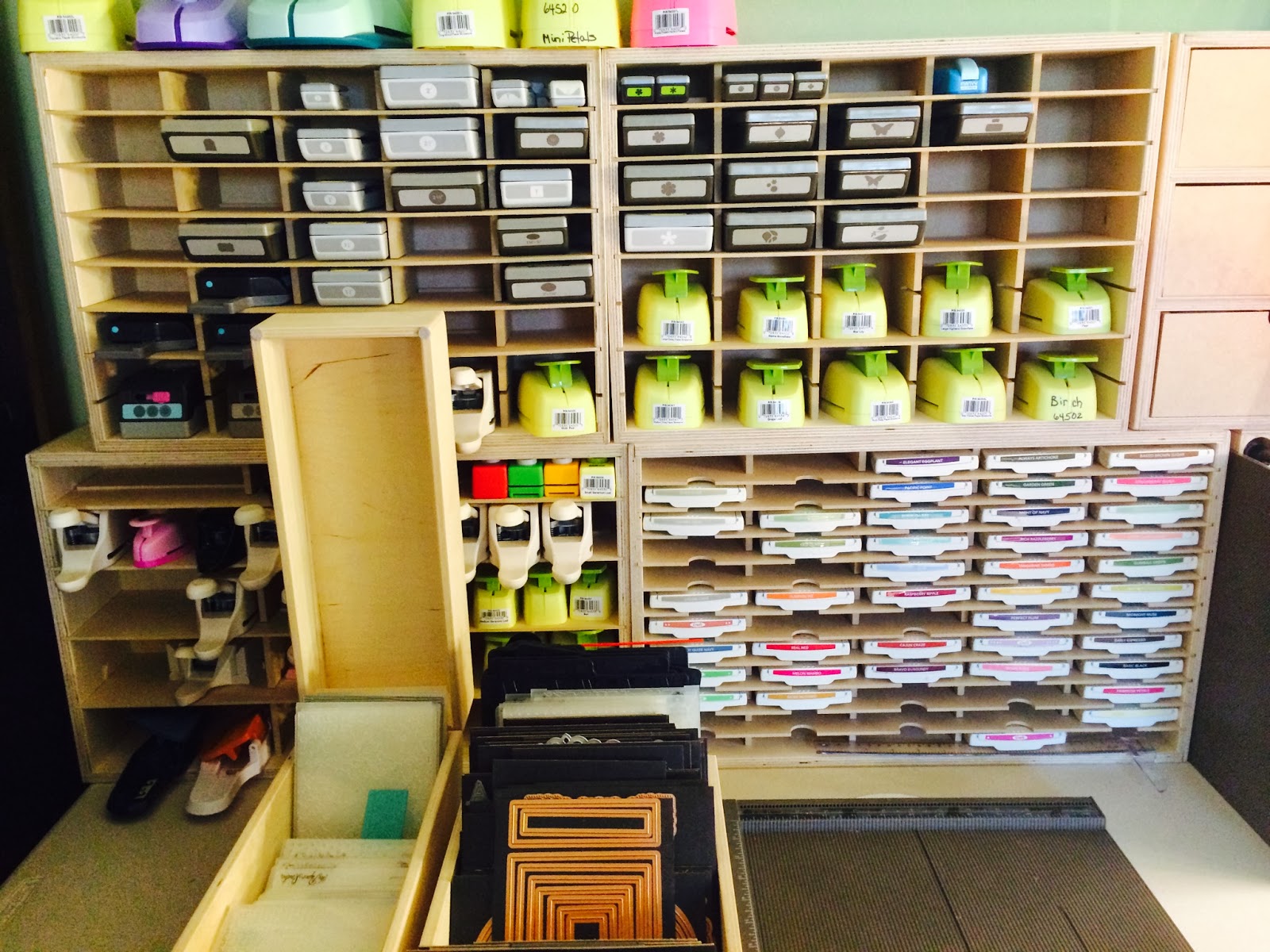 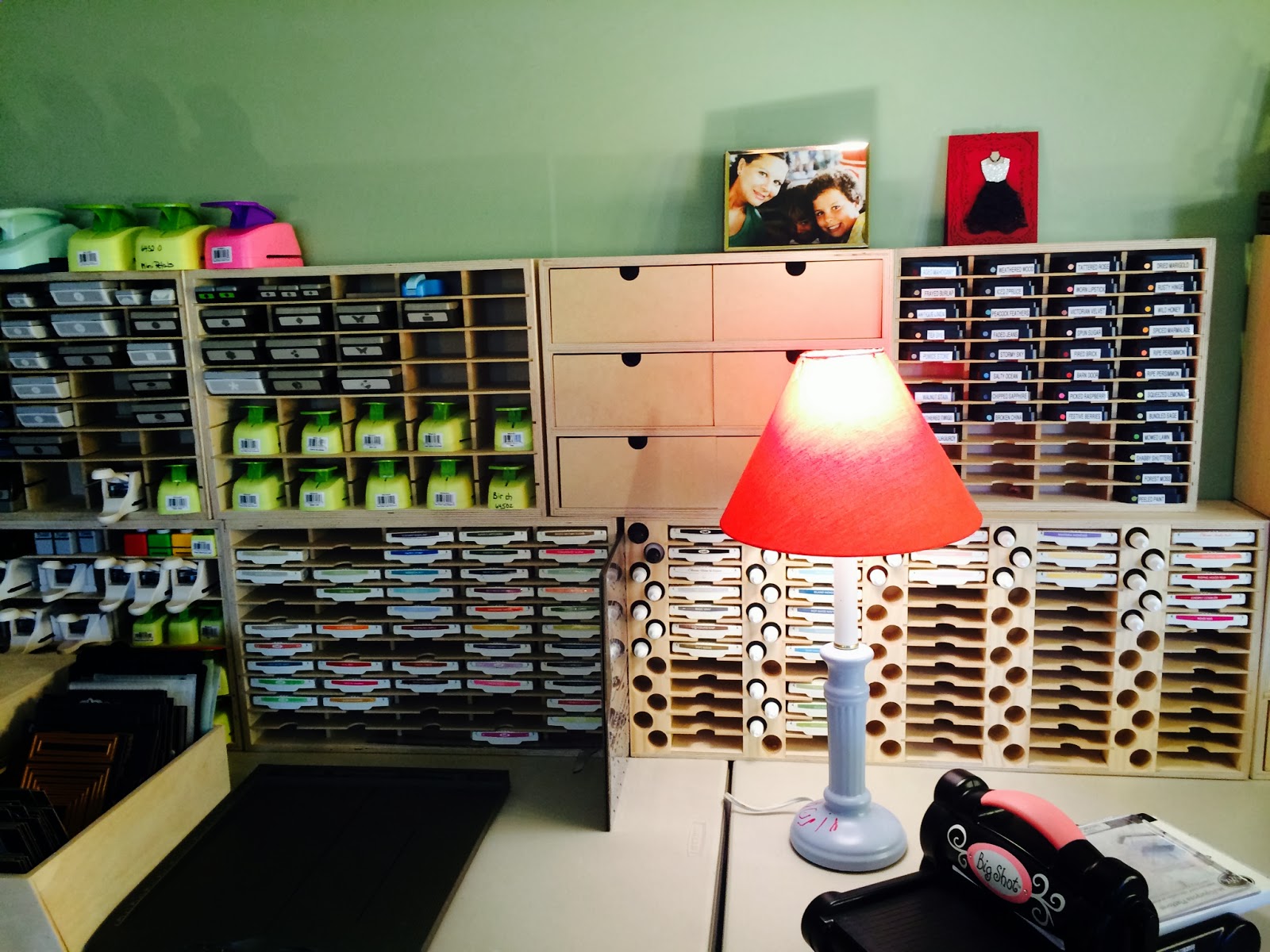 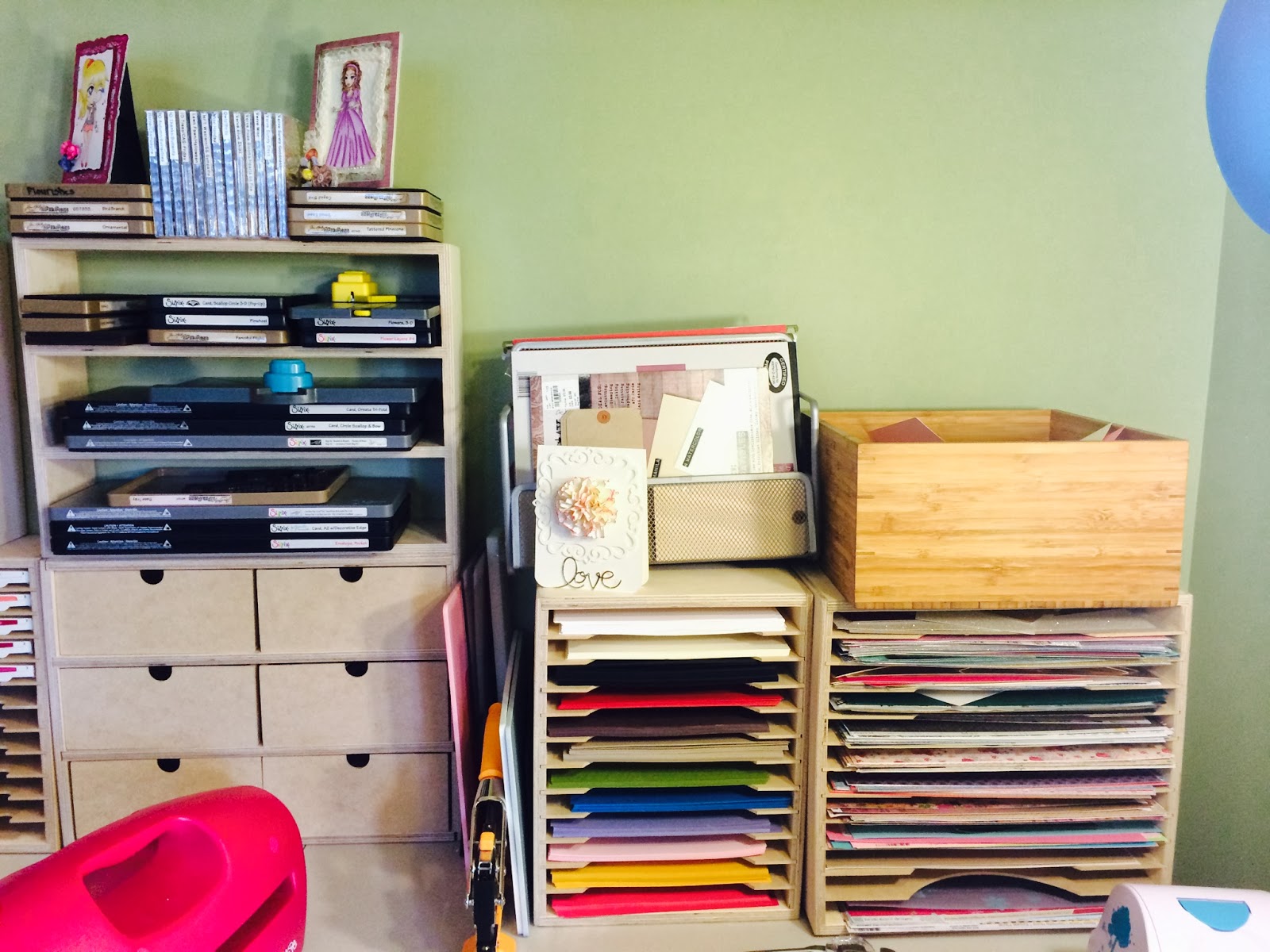 The last two pieces I'm ordering are another large die tote with magnetic sheets and another whale-tail punch holder.

I won the contest after this order, so I have my 50 bucks to play with. That'll help with this order. However, I've got a FEW more things to do and I want to share a few mistakes I made with this room in hopes you won't make the same mistakes. Pay attention:

1-I should've gone with my gut and not talked myself out of ordering the ink pad/refill holder the first time. Now, I'm going to have to order another down the road. Why? Because I love SU! ink and I have to have the refills. I filled up the first 60 pad holder a couple of weeks after receiving it but am now transferring a lot of the ink to the new one because I have the refill. Soon, I'll run out of space on the new and be stuck with an empty pad holder, which I can still use but I'll have to put the reinkers in a drawer and I'm back to square one. That being said, the good news is that this holder, while it fits SU! ink perfectly, there's a way to customize it in minutes to fit almost ANY ink pad from ANYWHERE. Here, you can check if yours fit.  Go here if yours will fit...it explains how to make them.

2-Ditto with the Tim Holtz. I use the distress markers a great deal and need the combo holder over what I have. Same thing with the marker holder. Got the basic, need the bigger one that allows me to separate into color groups.

3-If you're a serious crafter, order the units so that they connect to the wall. My husband didn't want me to do that because he didn't want to have to drill holes in the wall that he'd have to fix and repaint over the years. Now, he regrets it because I can't grow my storage UP. Take that into consideration. Again...go with your gut. The money I thought I was saving ended up costing me more to get what my gut said to go with in the first place!!!!

Lastly, I want to share this with you. For many years, I was a self-proclaimed atheist. I gave up on God. Not that it mattered to Him, because He never gave up on me. I'm a work in progress. My humor is still ribald and my language deplorable but I'm trying. Always trying. :)

I made the decision several years ago to, no matter how short money got, never buy products from China or any other country but my own. While it's impossible to do 100% of the time, it's becoming easier. I also decided I would support companies who shared my beliefs. Hobby Lobby is a big one. I go there first. Always. Brett Haugen and Stamp-N-Storage is another. In every package, you receive a CD that shares the love of Our Savior, Jesus Christ, and the Gospel. Brett states that he is humbled that you have chosen to spend your money on his products and that the focus is well-made products, good prices, emphasis on customer service but that the main purpose of the business is the opportunity to share the Gospel. I like that.

Lastly, before you think you'd be 'wasting money' on storage and could be buying stamps instead-well-I said the same thing. However, I found myself repeat buying things I'd forgotten I'd bought and running out of others because I had things crammed in drawers. It cost me money to be disorganized. I also had problems completing things. Mostly due to having an idea and spending so much time searching for crap that I either lost interest or forgot what I was looking for.

In closing, I have not been asked to do this, nor have I been promised anything or prompted...I looked around this morning and realized I'd been meaning to do this comprehensive post for awhile, but always put it in the background in order to craft. This morning, I have a toothache from Hell and don't feel like doing anything. The only reason I'm doing THIS is to try to stay distracted!

I'm off to put an aspirin on my tooth. Sure fire way to make it stop hurting. My doctor doesn't like the method but unless he's going to give me morphine, then to heck with him.

Love y'all! And a special thanks to Stamp-N-Storage for giving people like me an option to support a business built by faith and run with a higher purpose. It's an honor to trust MY name and reputation with SNS! Not that either is worth much. If anything.


Posted by papercraftgoddess at 10:02 AM