"Surviving a Last Minute Baby Shower" or "Why I Still Don't Miss My Uterus" (working title, of course) 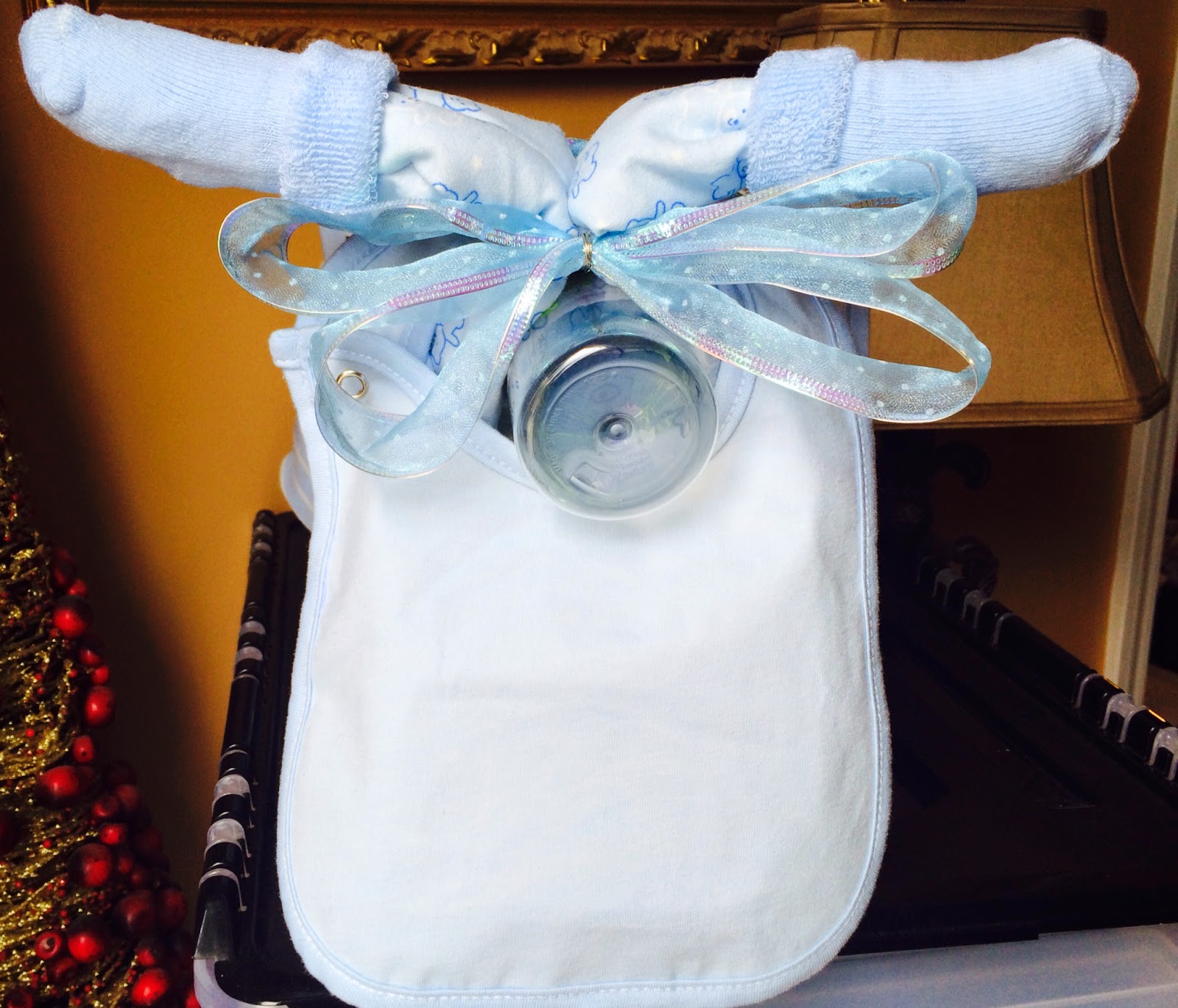 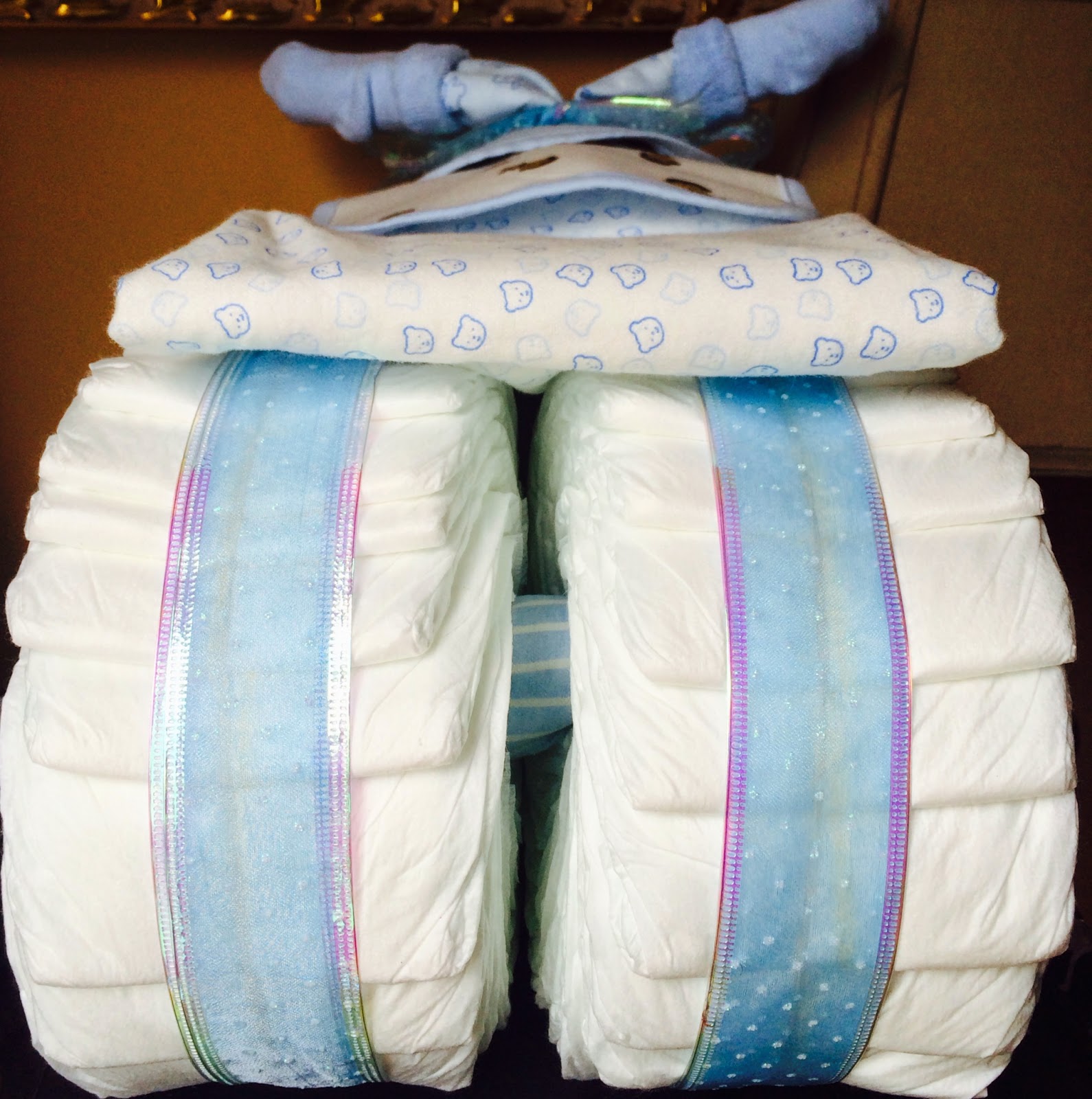 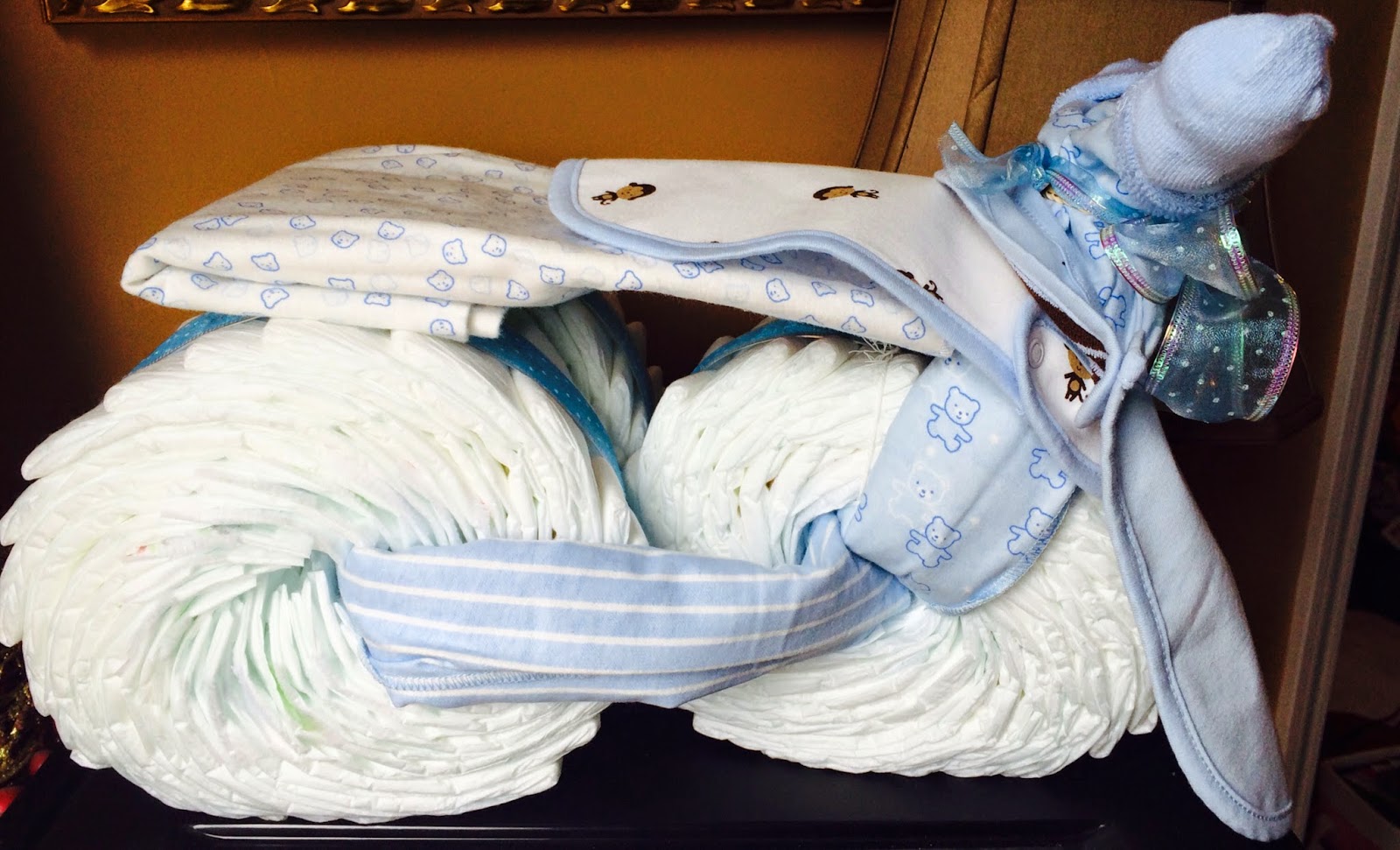 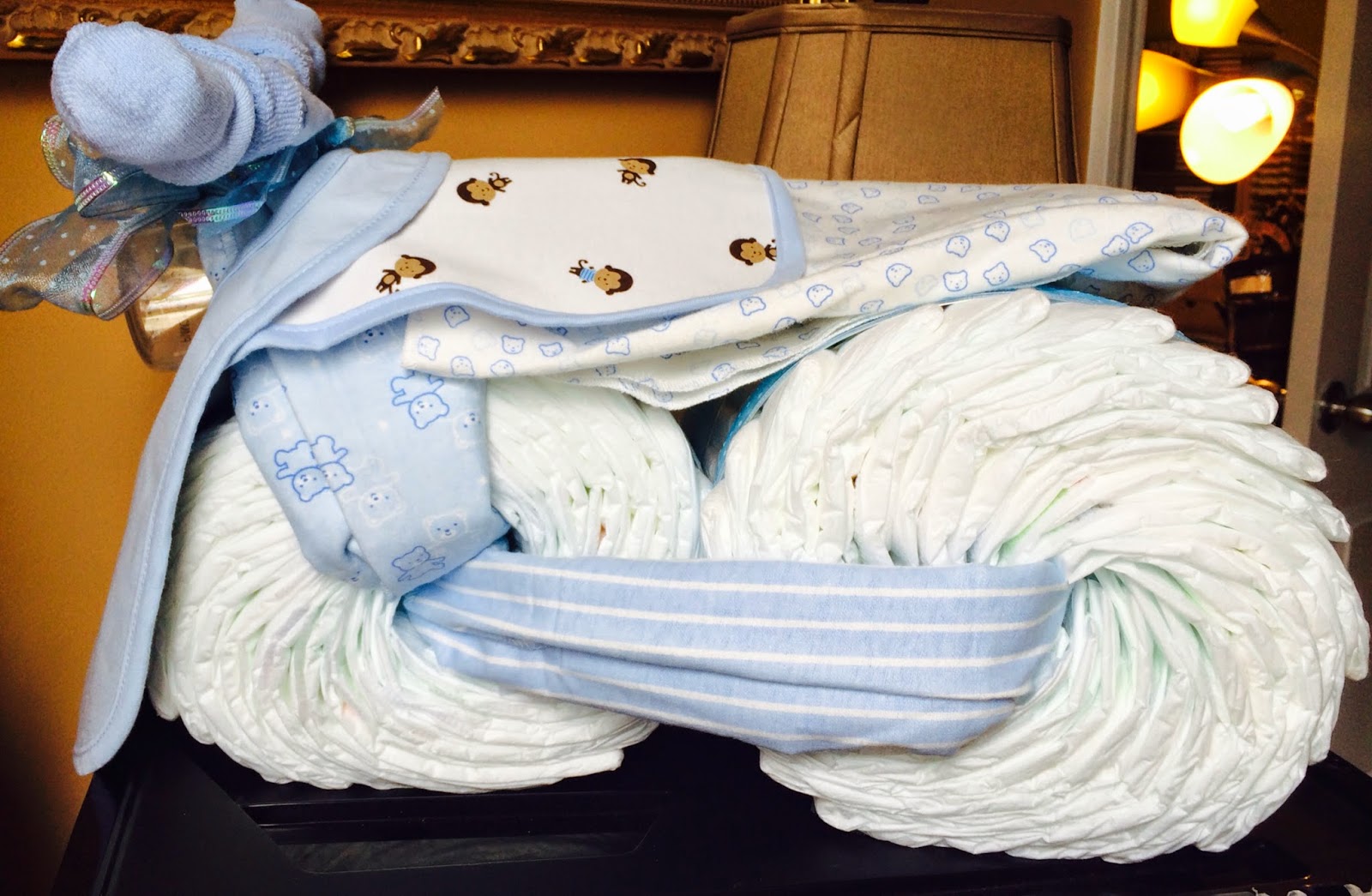 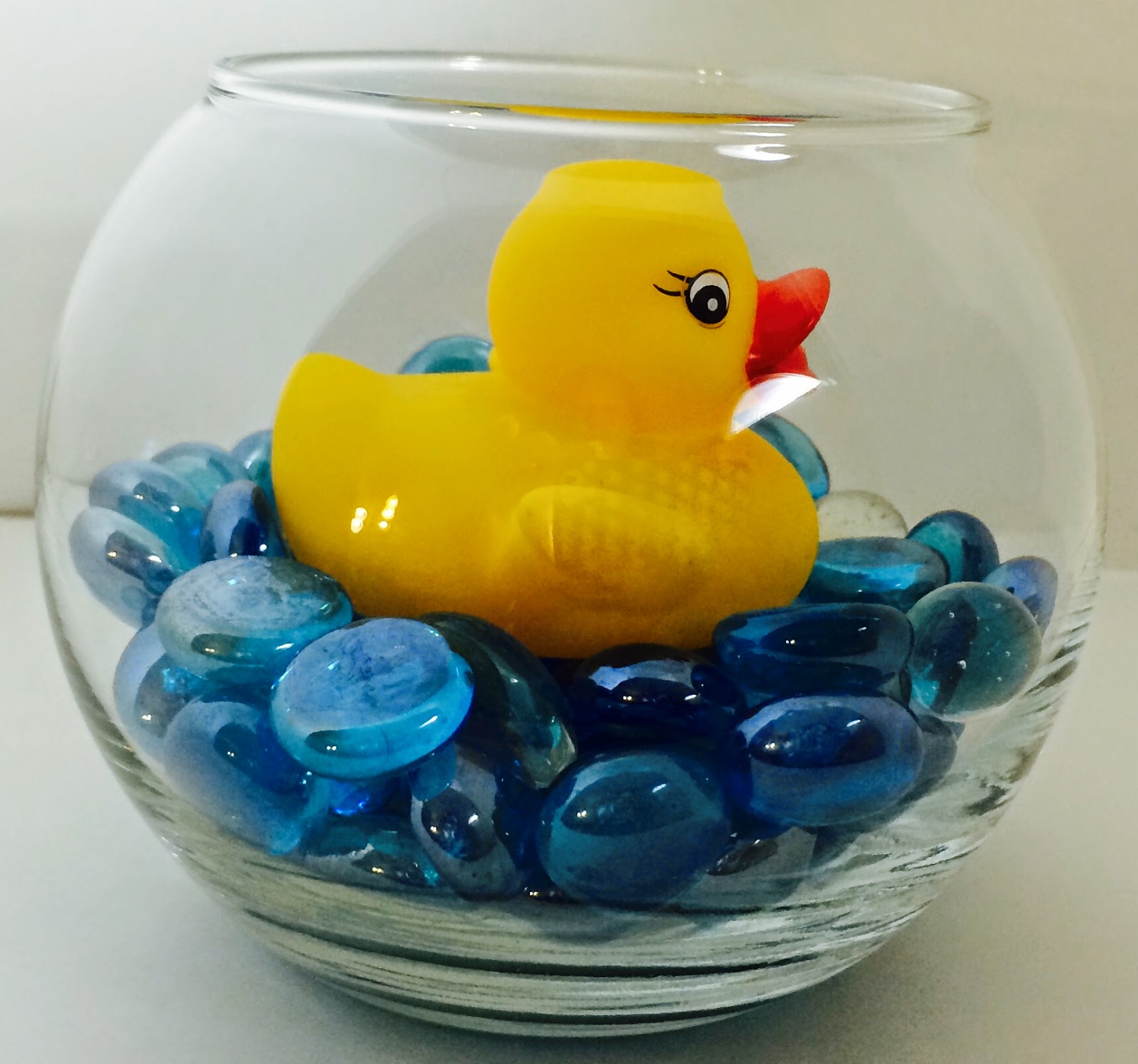 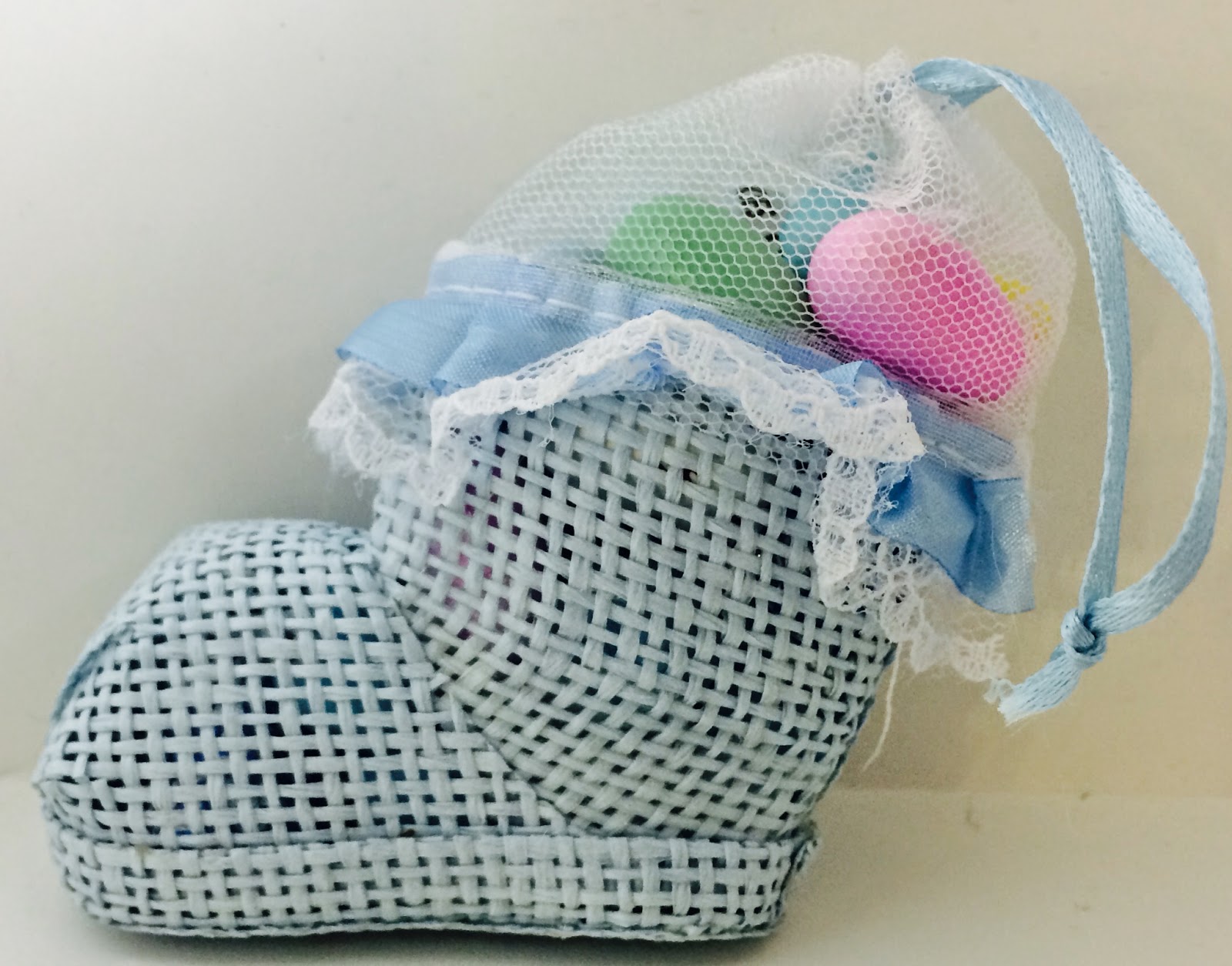 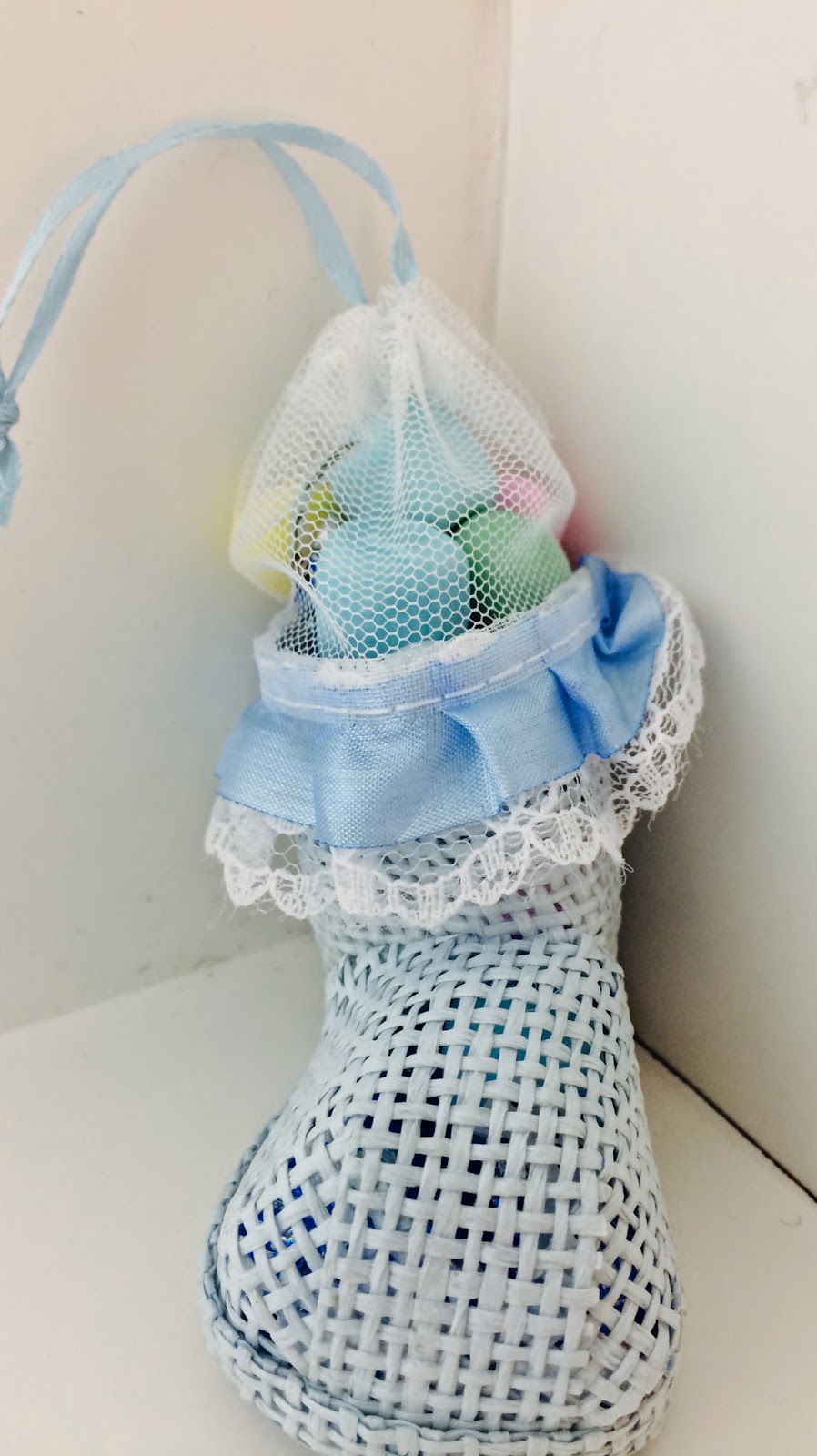 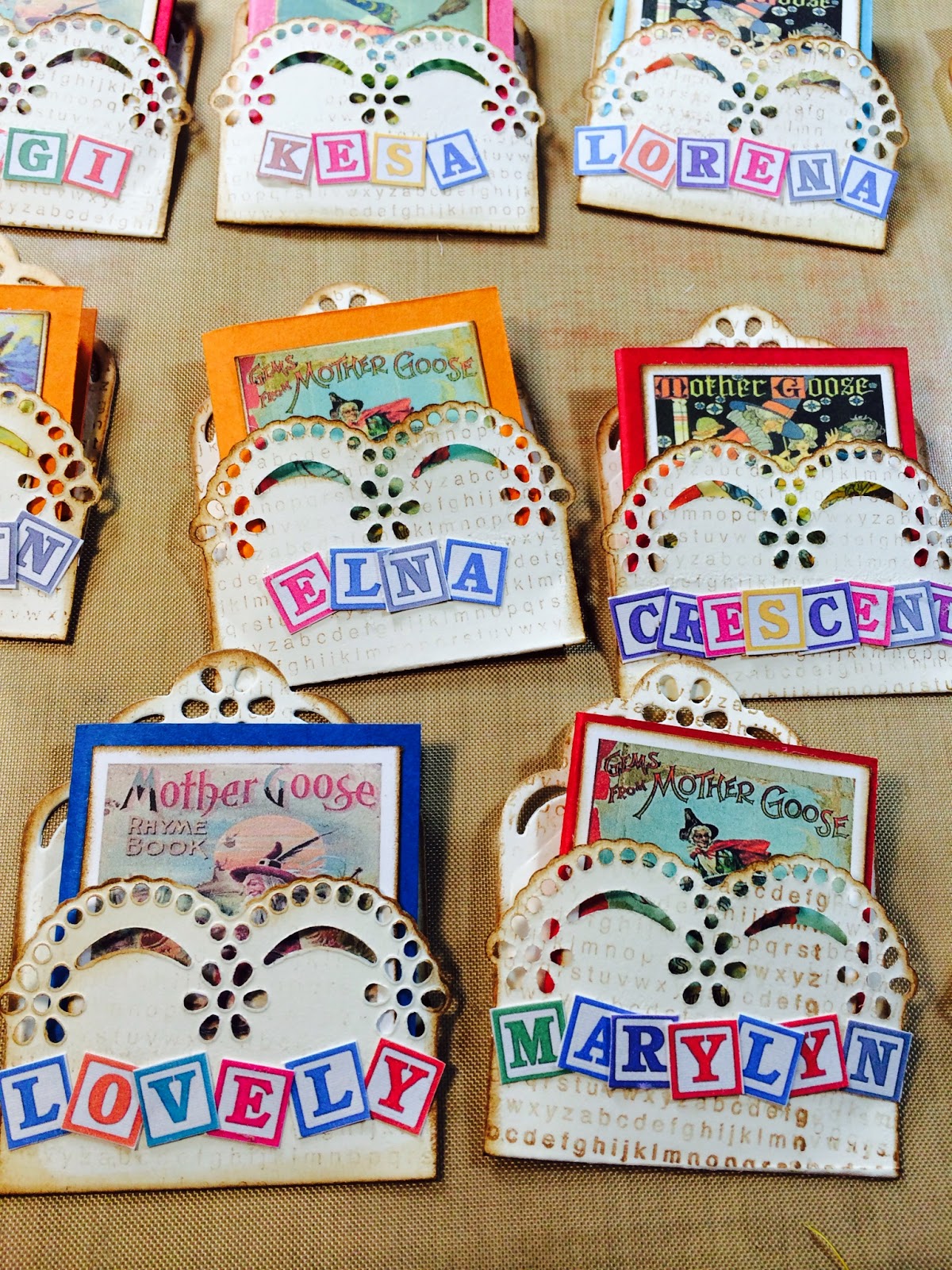 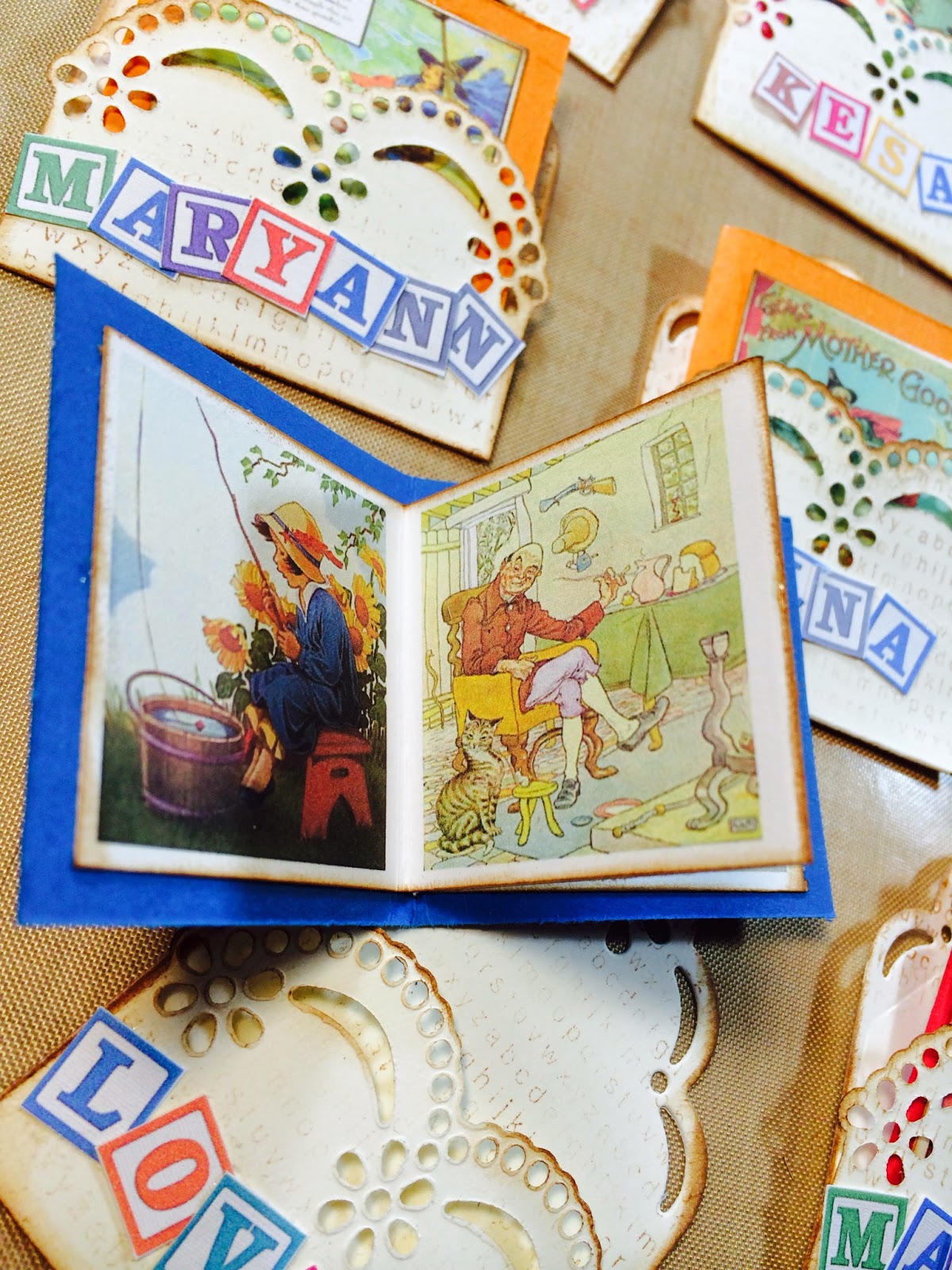 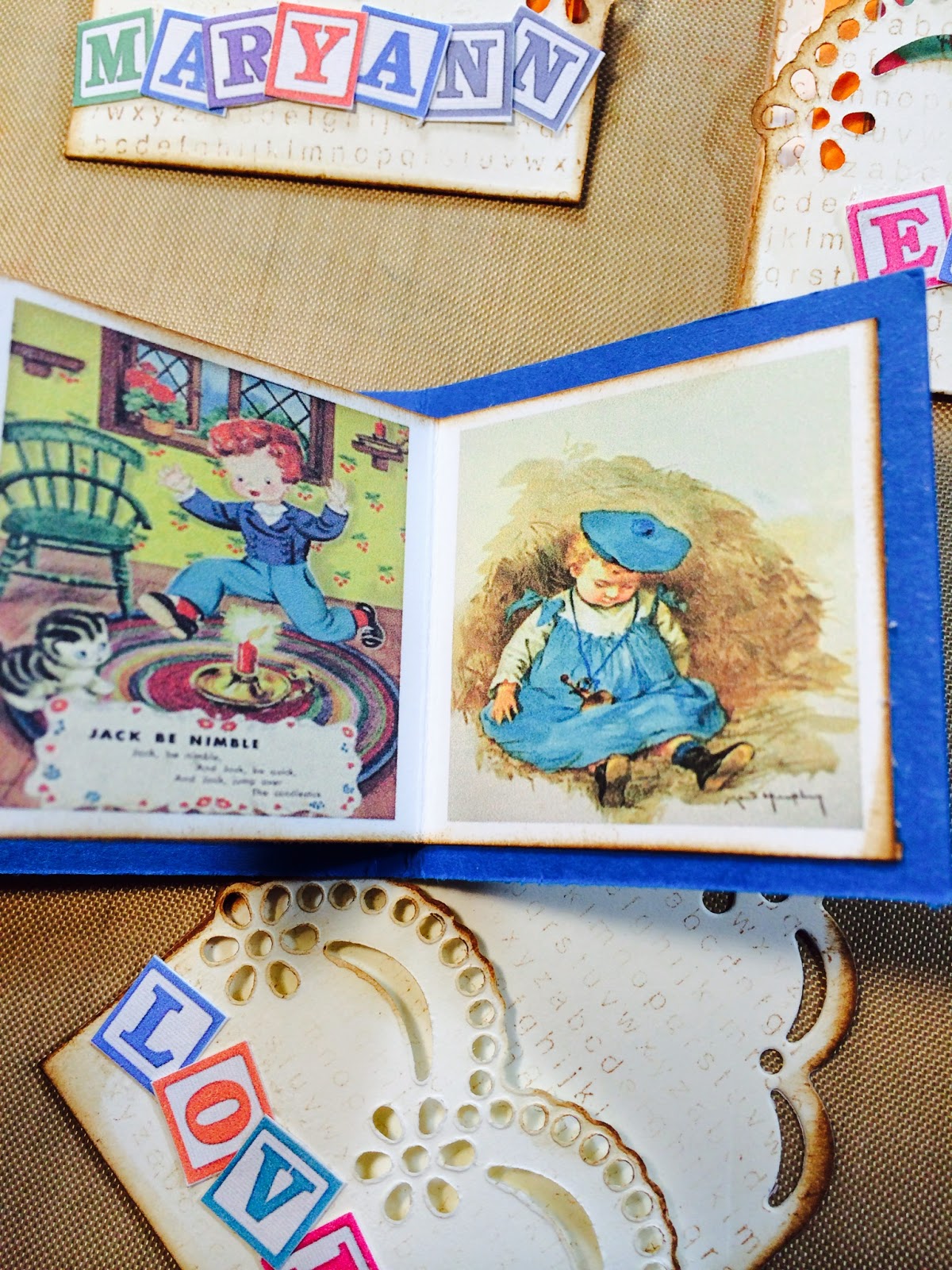 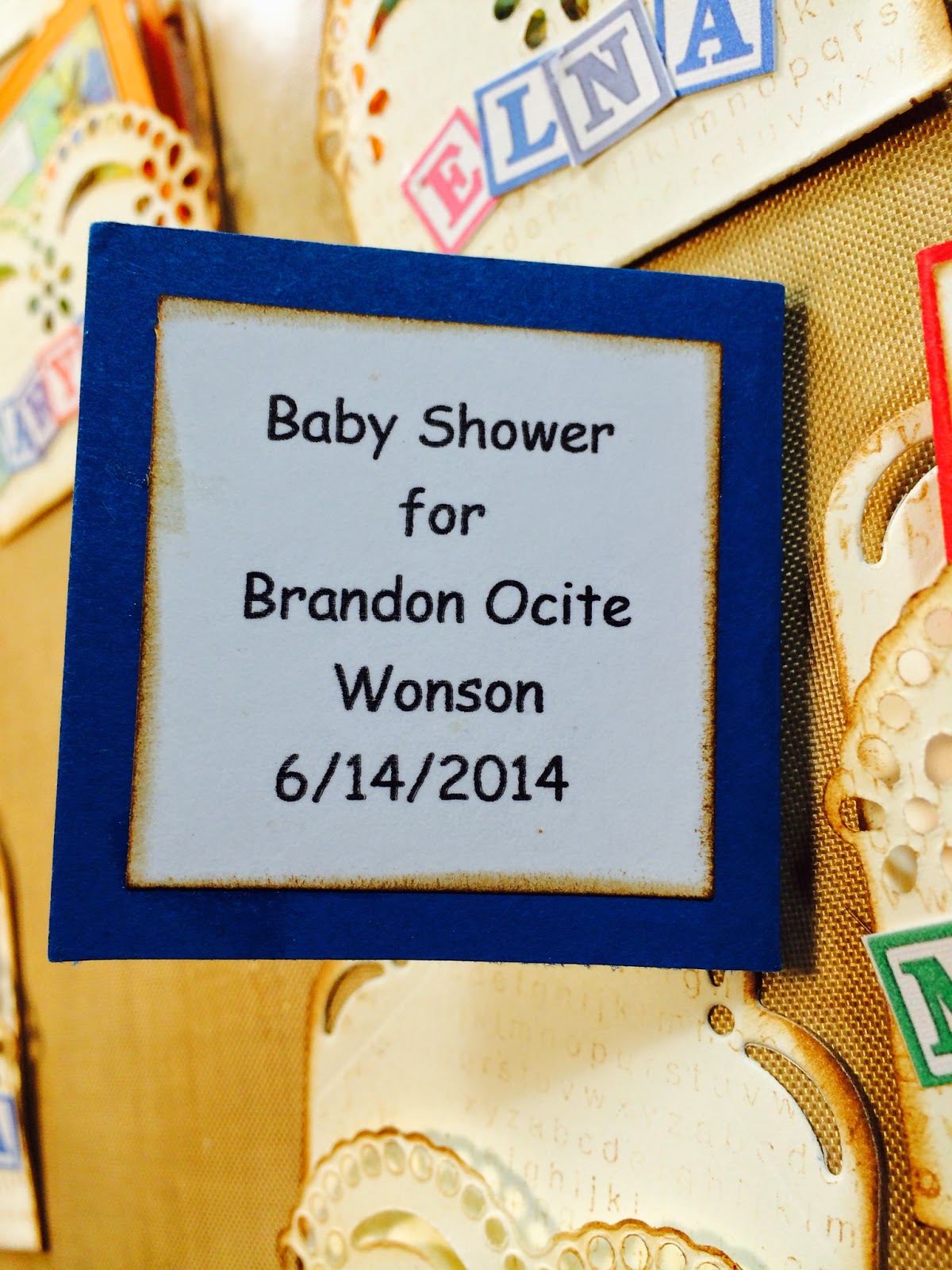 Name tag vendor info at the end of post

When I found my neighbor was having a baby, I volunteered to host a shower with another one of her friends. Flash forward several months until the end of May. Friend not available AND my neighbors had sent out invites for June 14th. A day we had mentioned months before but I didn't think had been settled, since we hadn't talked about much except for me to say "Have (your friend) call me" or vice-versa. Anyway, it was too late to worry about it. I made the tricycle diaper cake, decorations and  name tags in less than a week. A little blue, sherbet punch with a couple of ducks floating in it and a cake ordered to be picked up on the 13th finish it off. Had to cram it in before carpal tunnel surgery on June 2. Five days, b**ches!!! HAH!  How's that for some last-minute planning?

***PAM (pre-Adderall moment) Unlike the last shower I hosted over two years ago, not ONCE, during all this playing around with baby stuff did I even THINK about 'what it would be like', nor did I fondly reminisce about my long-departed uterus. Lord knows I can barely survive the ones at home at 15, 10 and 8...another baby would kill me. Literally. Now, back to regular programming.

Granted, it got done but don't think I didn't  notice that, despite this chaotic spate of manic activity (accomplished despite hands not working properly due to Carpal Tunnel...not that I really noticed...I've found pain-meds can make any temporary useless part functional), I've not been myself for several weeks, in terms of generating my usual fabulous-ness.

The reason behind this is quite simple. It occurred to me, not long ago, that I had spent the last decade cultivating underachievement in pretty much everything I do. Be it hobbies, marriage or parenting, I find my life is easier when I manage the expectations of everyone around me.

Yeah...you read that right. I know that ol' Frank Covey says to manage your OWN expectations but, to be completely honest, I pretty much gave up expecting too much out of other people a long time ago. The only thing left was to make *&%* sure that no one, in turn, expected too much out of me.

Now, I know that some of you are distressed to hear this. You think that managing even one-half expectations is better than none, right? It's the old 'half is better than none doodie that has been instilled in us for as long as we can remember.

But I'm here to tell you that, in the case of expectations, managing half is worse than managing none. Case in point: I will tell you two tales of people who managed either one or the other and not both. At the end, you tell me if you still think managing half is the better way.

First is the story of one J. Bruce Ismay, whose company built the Titanic. Ismay managed HIS expectations of himself, by considering himself fabulous and worthy of preferential treatment and unearned respect and admiration, but not the other's expectations in terms of safety and behavior from the get-go. Ismay not only ignored the building and safety of his ships, he was also the one who hired the Titanic POS Captain (who had already wrecked ONE of Ismay's ships before this) and made the decision to cut corners and get rid of half the lifeboats because they interfered with the scenery AND it cut down on costs, knowing all the while that most of the passengers pretty much have a one-way ticket to the bottom of the Atlantic in the case of an emergency. If that didn't make Ismay a**wipe of the new millennium, consider the rest of the story. Upon the realization that the worst was about to happen, Ismay calmly stepped on a half-full lifeboat, then had the audacity to refuse to pull others inside the boat, claiming there was no room.

Once he boarded the Carpathia, he demanded a first-class room and locked the door, even as the Captain demanded every officer and crew (including himself) shelter, feed and tend to all the passengers who were saved. Ismay, after putting out a DND sign on his stateroom door, didn't emerge until he got to NY. He tried to cable his company office in secret to get him out of NY on another ship the second he landed, in order to escape US authorities. His message was intercepted and he was perp-walked straight to a Senate hearing. They smacked him on the wrist, he ran back to England (where he lived in a separate wing from his wife and kids-said he didn't like any of them) and lived there until he died. If all that wasn't bad enough, it was because of this SOB that  75 years later, we would have to suffer through 175 trillion radio airplays of "My Heart Will Go On" which managed to lodge in the heads of anyone who heard it once, and will play in loops to a point you feel homicidal, even though you will still cry like a baby when Leonardo slips beneath the water...after ALL that damned hard work)...

Dammit. I totally forgot what I was talking about. Wait a second. Let me scan the previous regurgitation....

OH! Expectations. Got it.

Ismay was an a**hole of the highest degree and lived up only to HIS expectations, ignoring OURS. But poor Leonardo didn't manage OUR expectations when he allowed Kate Winslet to live and let his fine self drown in that cold, dark water.

Do you see how dangerous it is to manage only HALF of the expectations surrounding you??


Believe me when I say that I've taken these cautionary tales to heart. Along with certain rules and regulations regarding manslaughter when I ever HEAR the name 'Celine Dion'. Expectations must be managed on both ends. Then, at the end of the day, you may die bereft of any real accomplishments, but you won't go down in history as a flaming a**hole or unnecessary fish-bait, either.

What does all of this mean? It means I take long breaks, on occasion, to make sure I don't become enslaved to any high-falutin' expectations of my own, and in turn, use that inconsistency (and sheer laziness) to manage all of YOUR expectations, when it comes to your chomping at the proverbial bit for these thrilling communiques I send to all three of you who subscribe to this blog.

Name tag CASEd from artwork created by the Goddess Theresa Miers I'm expounding on where to find artwork and some details I learned along the way. She was able to use software to customize the sizes of the artwork and letters. I went to Ron, who sells the Mother Goose images, and paid him to do it for me and send the png files. Worth every cent and cheap.

Die cut Marianne Designs Creatables Die Labels cut from cream cardstock and sponged with Tim Holtz Vintage Photo Ink. I used Stampin' Up A to Z stamp for alphabet in the same ink. Flip up bottom of tag and glue at lower corners.

I used scrap cardstock in different colors for the book covers. Cut each book cover at 1-3/4 by 3-7/8. Fold in half.

I ordered the Vintage Mother Goose images from here  and paid Ron to resize the pics to 1-1/2 inches. 6 dollars total. I made a mistake and should've had him flip the images so that they printed landscape and I would have 6 images side by side instead of 4. I'm having him do this for me later, so the inside of the book will have 6 images (and pages) instead of 4. Theresa's has the 6 and it looks SO amazing! Just a simple concertina fold and glue the front and back pages only inside the folded covers.

For the letters on the front, go to letteringdelights.com  Here's the link to the actual blocks. I paid Ron an additional 3 to size them to 3/4 of an inch each. I don't have the software, NOR the smarts to do it myself like Theresa. But that's why she's a goddess, my friends!! I'm going back to Ron to have him put together 1/2 sheets of vowels and 1/4 sheets of popular letters so I don't have to print out so many sheets for vowels.

Posted by papercraftgoddess at 8:35 PM