'WATER' you up to? I hope THIS project URNS your attention!

I hate puns.
I really do.
Whenever I have the misfortune to run into one of those 'punny' people, I find they have the exact same effect on me, as those (namely, my children) who chew with their mouths open, making smacky, slurpy sounds...
Want to know exactly what is that effect?
As soon as one of my children begins masticating loudly, setting off a chain reaction in which the others will follow suit, I lose all realization that those are the little angels I birthed, and I want to give them up for adoption.

No...I'm just kidding. I don't want to put them up for adoption!

I want to beat them within an inch of their lives.

It's not my fault. You see, a few years ago, there was a study that concluded that there are actually people who went temporarily insane when faced with chompy, slurpy, teeth sucking, noisy while swallowing barbarians...literally...these people temporarily lost their minds and tried to hurt people!! They even came up with a name for it:

Seriously!!! Click here for the definition and all the other fun stuff.

But to prove my point, here's part of the entry.

Not to mention that it tends to have a correlation with OCD, and we ALL know who's constantly embroiled in some battle with hers on a daily basis, don't we?

(crickets chirping......no, wait, that drives me crazy too.)

Now, I'm fully aware that many of you are somewhat skeptical regarding disorders such as Misophonia, and I totally understand. See, we live in a society that wants to 'diagnose' everything. If you're blue, you're 'chronically depressed'. Loud and energetic? 'Manic' or 'ADHD'. Painfully shy? 'Social Anxiety Disorder'. Overbearing, Spendthrift and a hypocrite? 'Politician'.

We can argue all day about whether or not we've become a society that has become so plastic, shallow and narcissistic that we can't just have general feelings and/or personality traits...we have to NAME them, so that we can play the victim. We could debate whether a lot of today's psychology is bunk and furthered by Big Pharm in order to drive profits through psych meds. Or, we can discuss why we've become so afraid of feeling ANYTHING, that we panic and try to medicate ourselves out of our 'self' and back into 'surface only'.

But, all that potential future debate aside, I WILL say that we REALLY should treat this Misophonia thing as legit...because, if we don't, well...sigh...I COULD be looking at a long-term, fully supervised living arrangement.

And it's NOT at the local retirement facility.

Now...onto my dabblings for today:

If you'll remember, we're building a 'Secret Garden' shadowbox, using a Graphic 45 Staples box and including lots of fun, handmade miniatures to fill it!

Okay, okay...I know...'what's this WE stuff', you're asking. Fine. I'M building this Secret Garden, and this is another element to join my Koi pond (Full reveal tomorrow, folks!) and my garden urn made of quilled paper.

But today is the garden sink, made by Prima, and gussied up by yours truly!

Let's start with the sink. 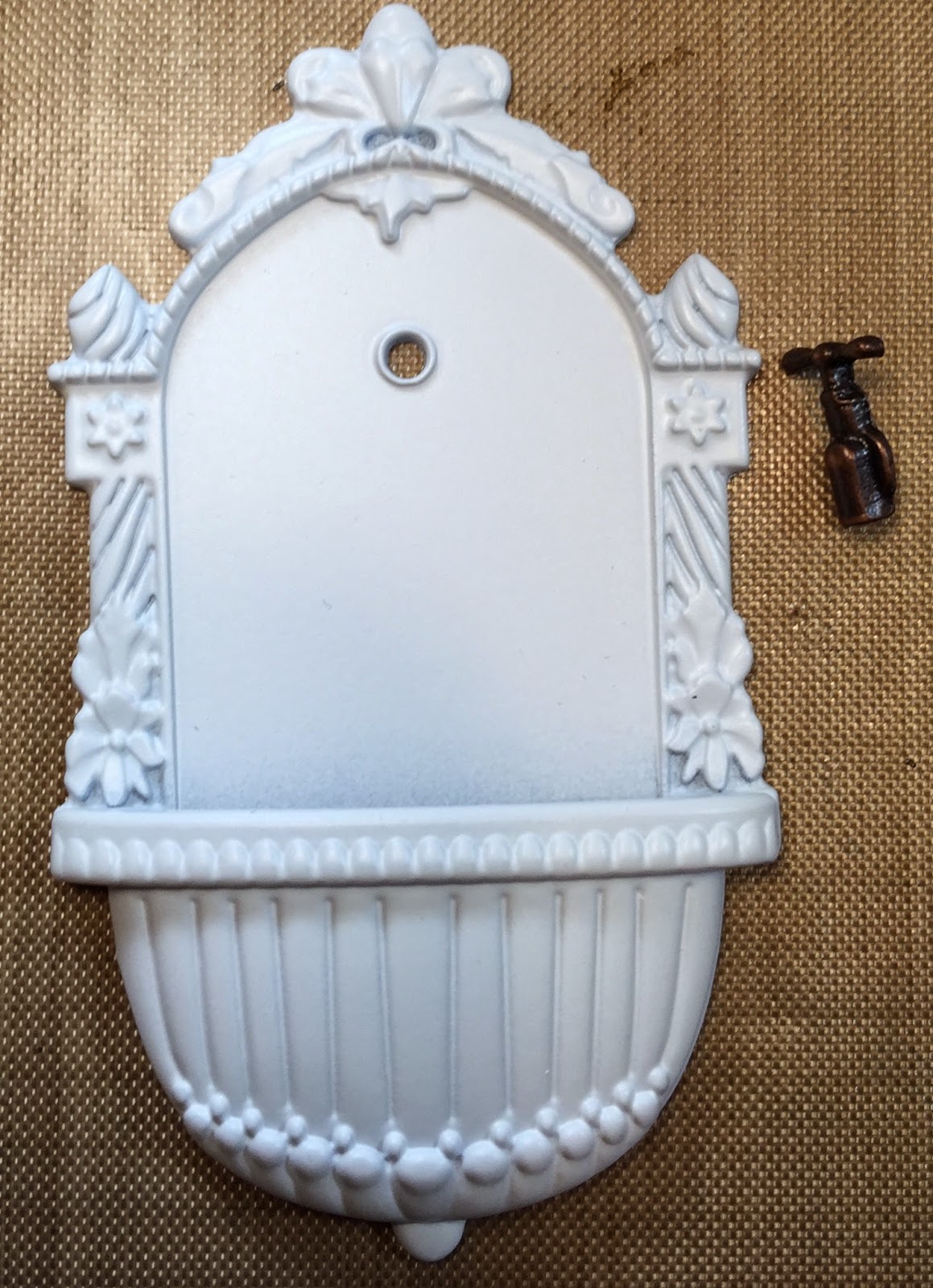 Now, this is WAY to purty to be in ANY garden. So, let's age it up a bit. Using Mushroom alcohol ink and a felt pad that I hold in my hand (no girly applicator for me....I live WIDE-OPEN here, people!!  Okay...so it's because you can't get into all the corners as well. Whatever.) 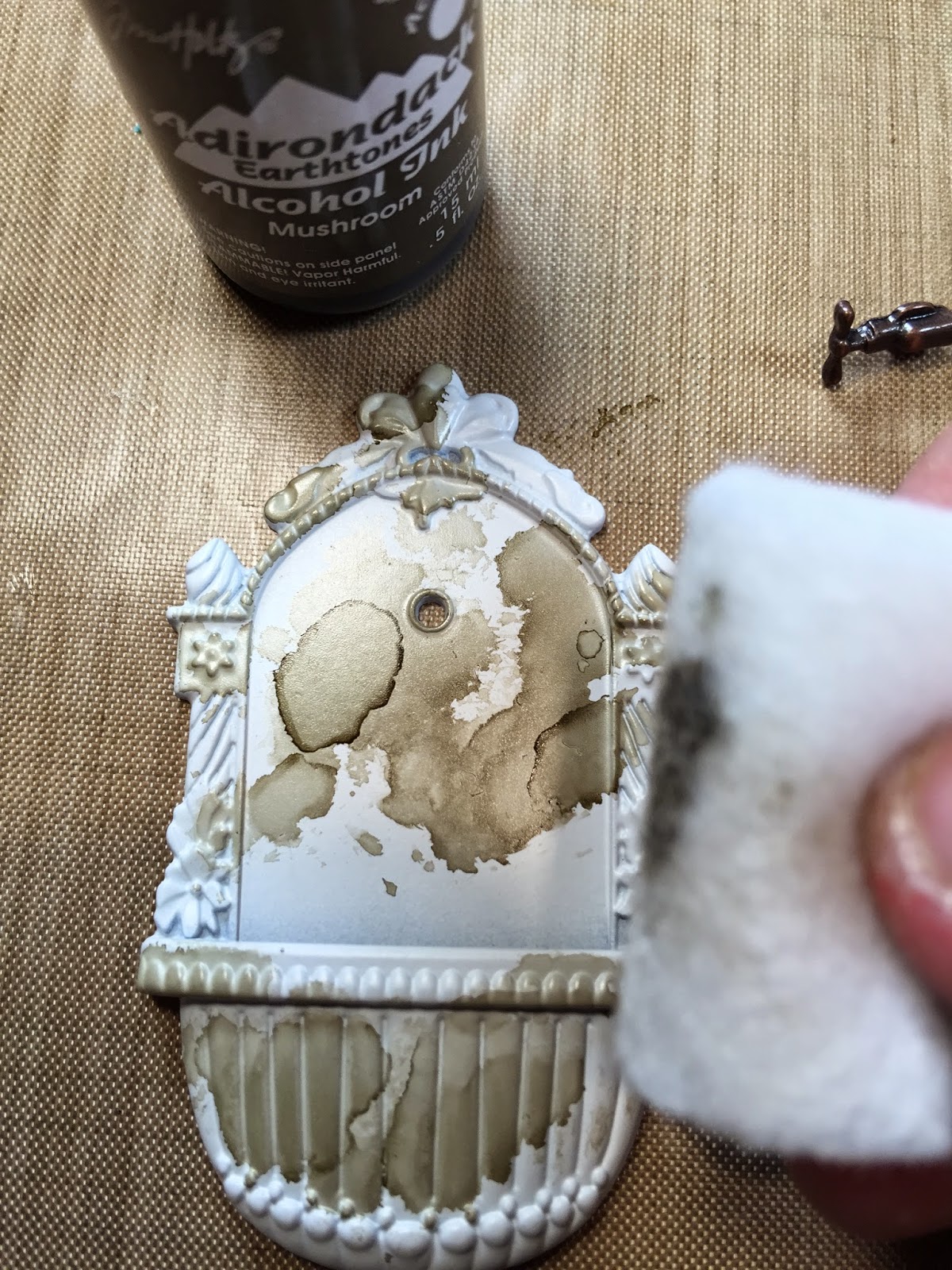 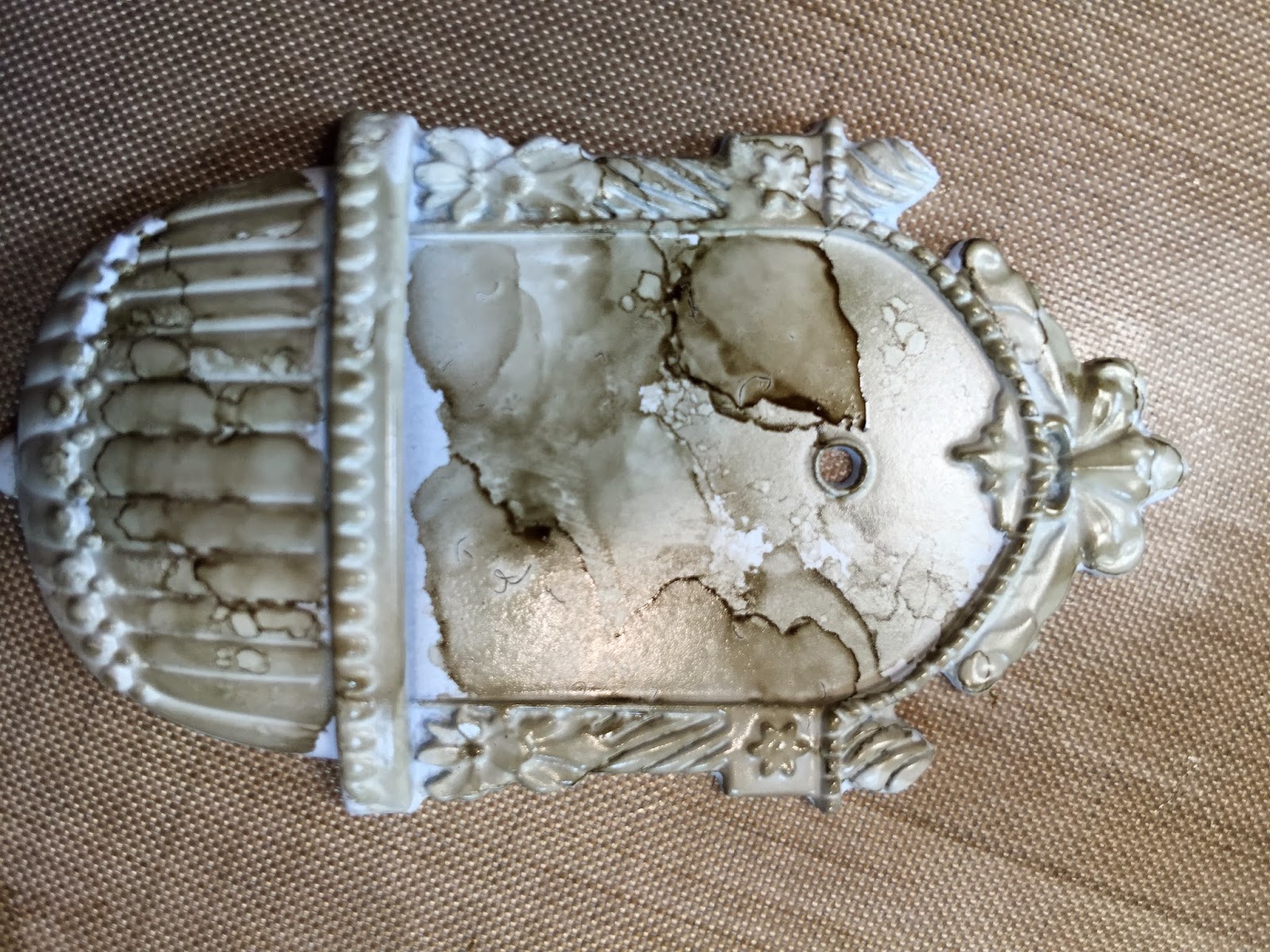 And I believe we've got a winner, here! 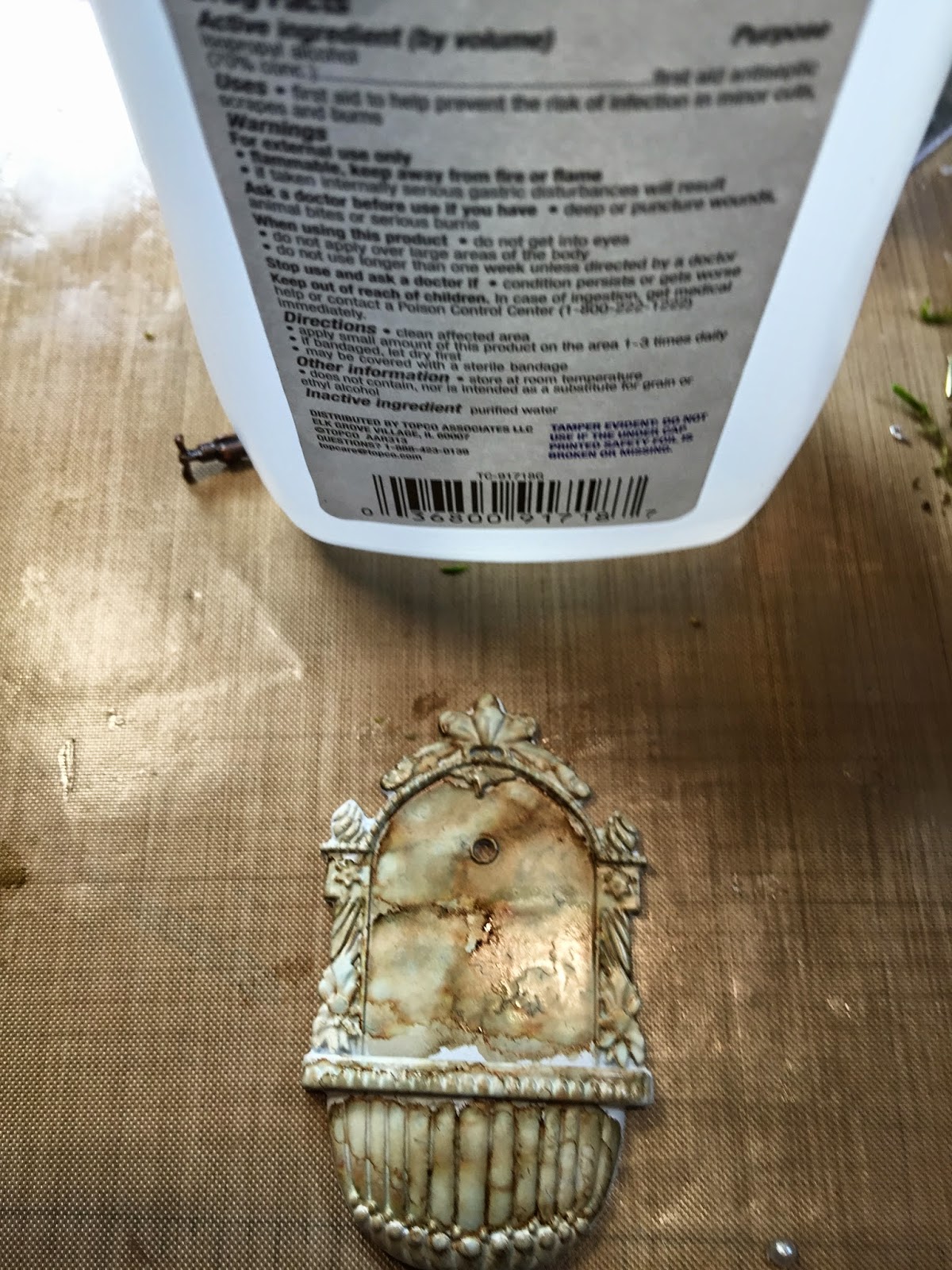 Btw, that bottle up there is alcohol. Cheaper than blending solution and just as effective. I'm a very messy person and I need LOTS of cleaning solution in whatever medium I'm....oh, well...whatever medium I happen to be making a mess in THAT day, and alcohol works for me.
Whatever you do, don't stress about any white part inside the sink....our 'water' will cover it up!

Next, let's grab our moss. Fresh from Hobby Lobby. 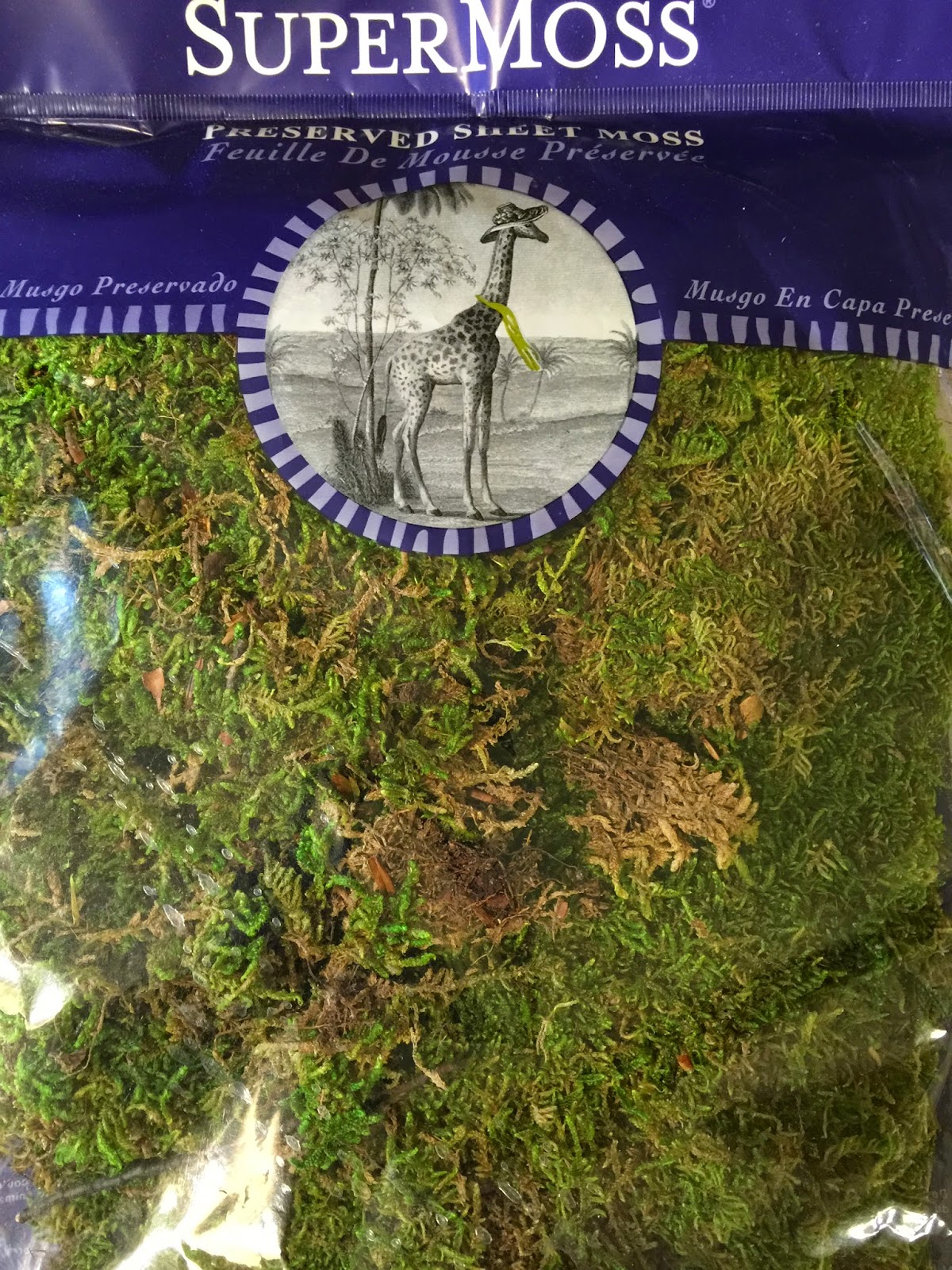 Then, using Glossy Accents, or ANY invisible when dry glue, let's start shredding that moss and add some believability to our garden sink, shall we? 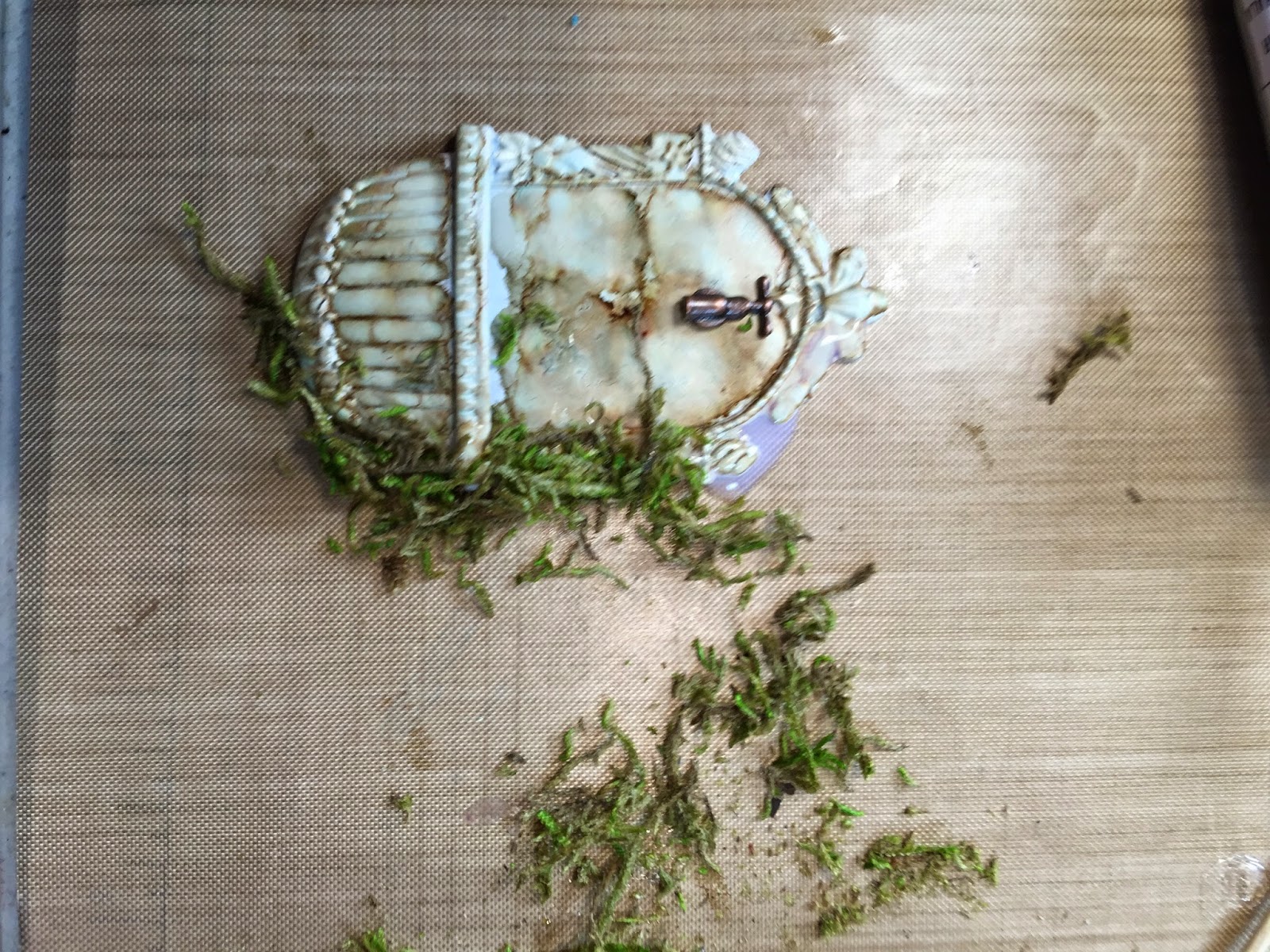 Look...I PROMISE you that there is NO WAY to mess this up. Seriously. Because I would've totally messed this sucker up a thousand times by now. Trust. So use as much moss as you like and stick it anywhere you want!
On the sink, of course.
heh heh

NEXT: Take your glossy accents or any clear drying glue and fill the sink. Also make a line from the spigot (which was installed several pics ago with E6000, It comes separate in the package and all you have to do is glue it in.) 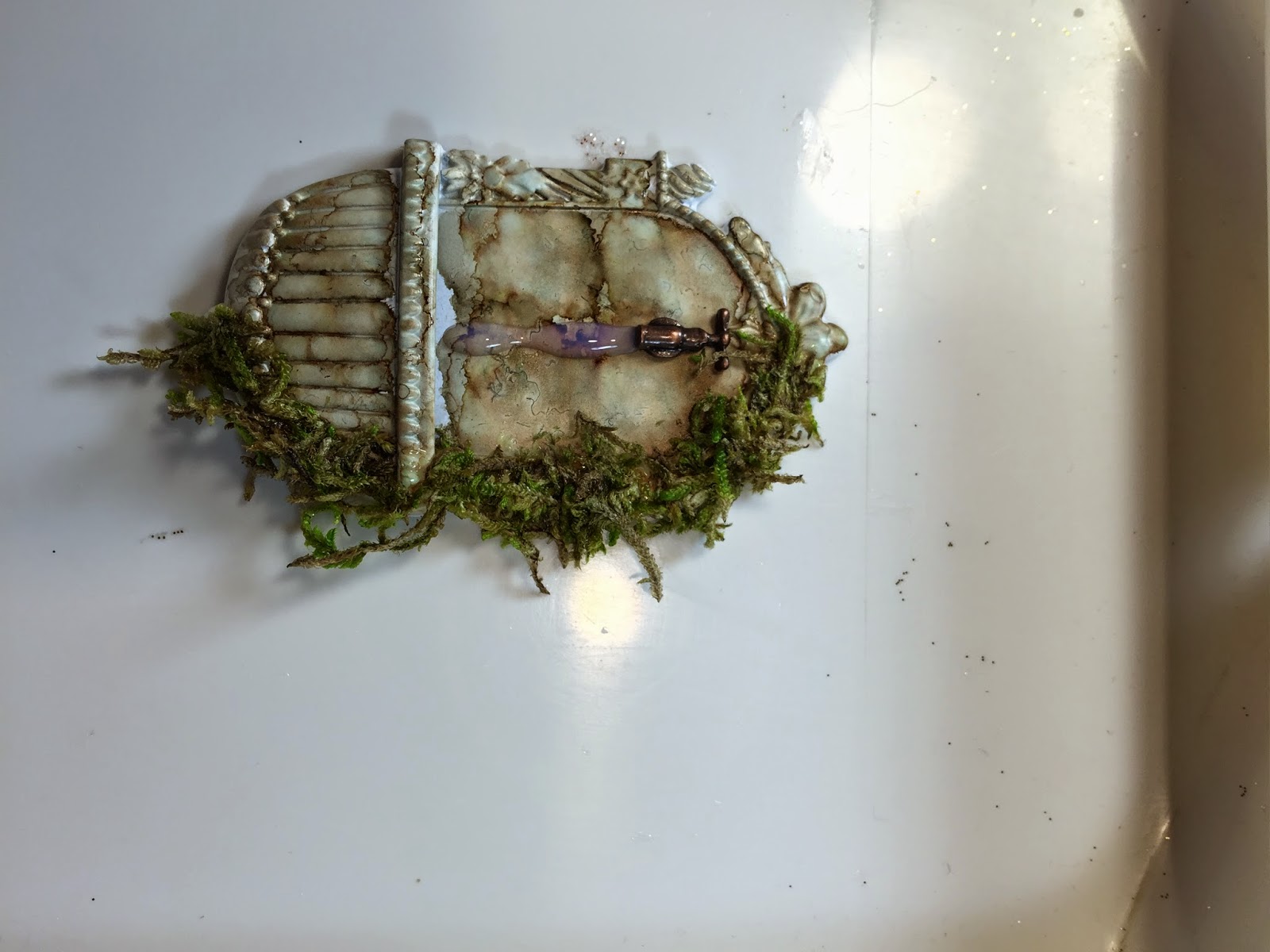 Next, I used microbeads-blue and clear-both found at Michaels, and covered the line to mimic running water. Using my little sharp, pointy thingy, I kept the errant beads from trying to make a break for it, for the few seconds it took for the glue to set enough to hold its shape. 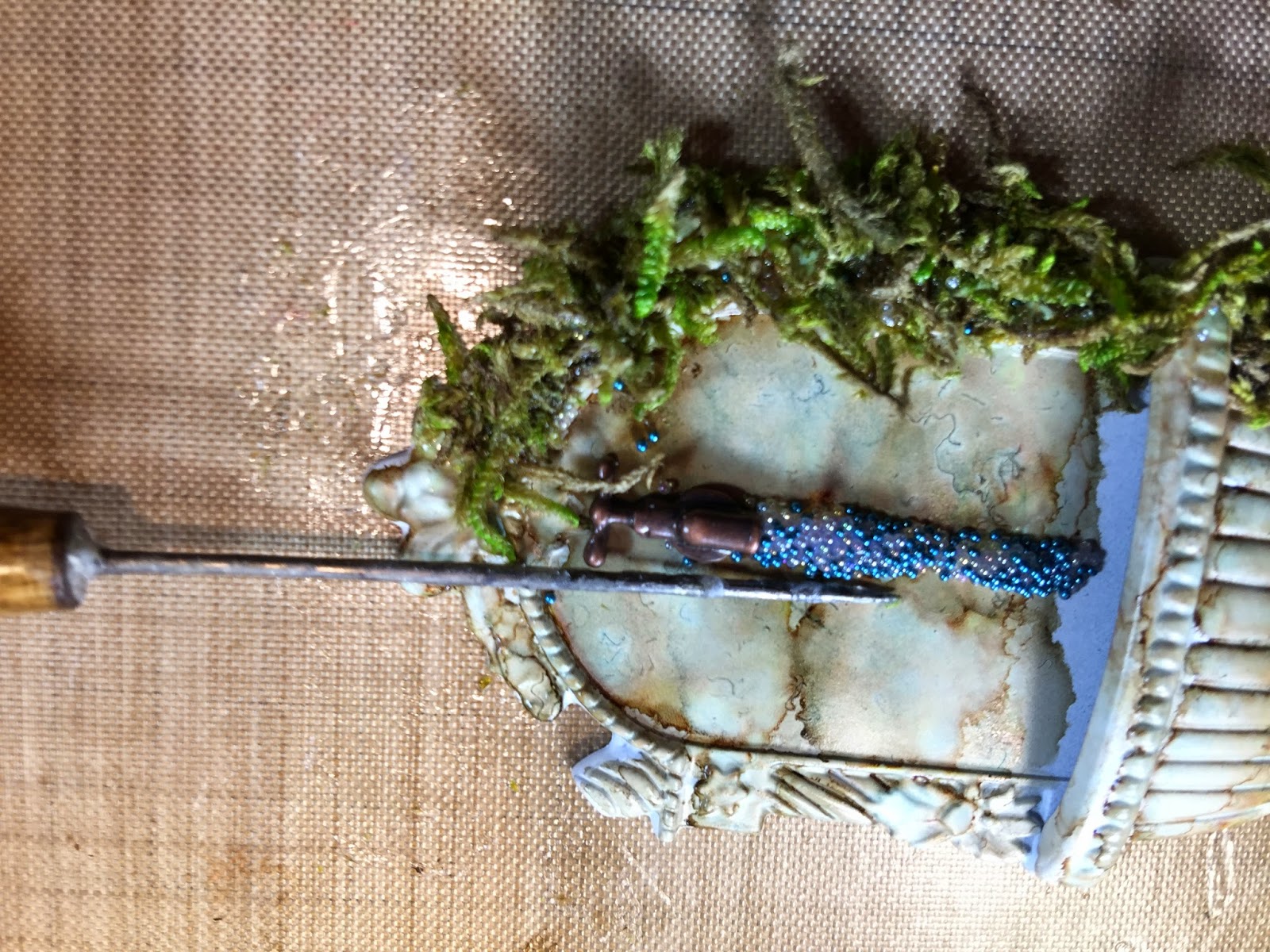 I drizzled some over the sides and let that sucker dry overnight! Give it a try,

Here's what we have for the Secret Garden so far. Tomorrow, the unveiling of the Koi Pond! Yeah...I know...you're about to burst from excitement. 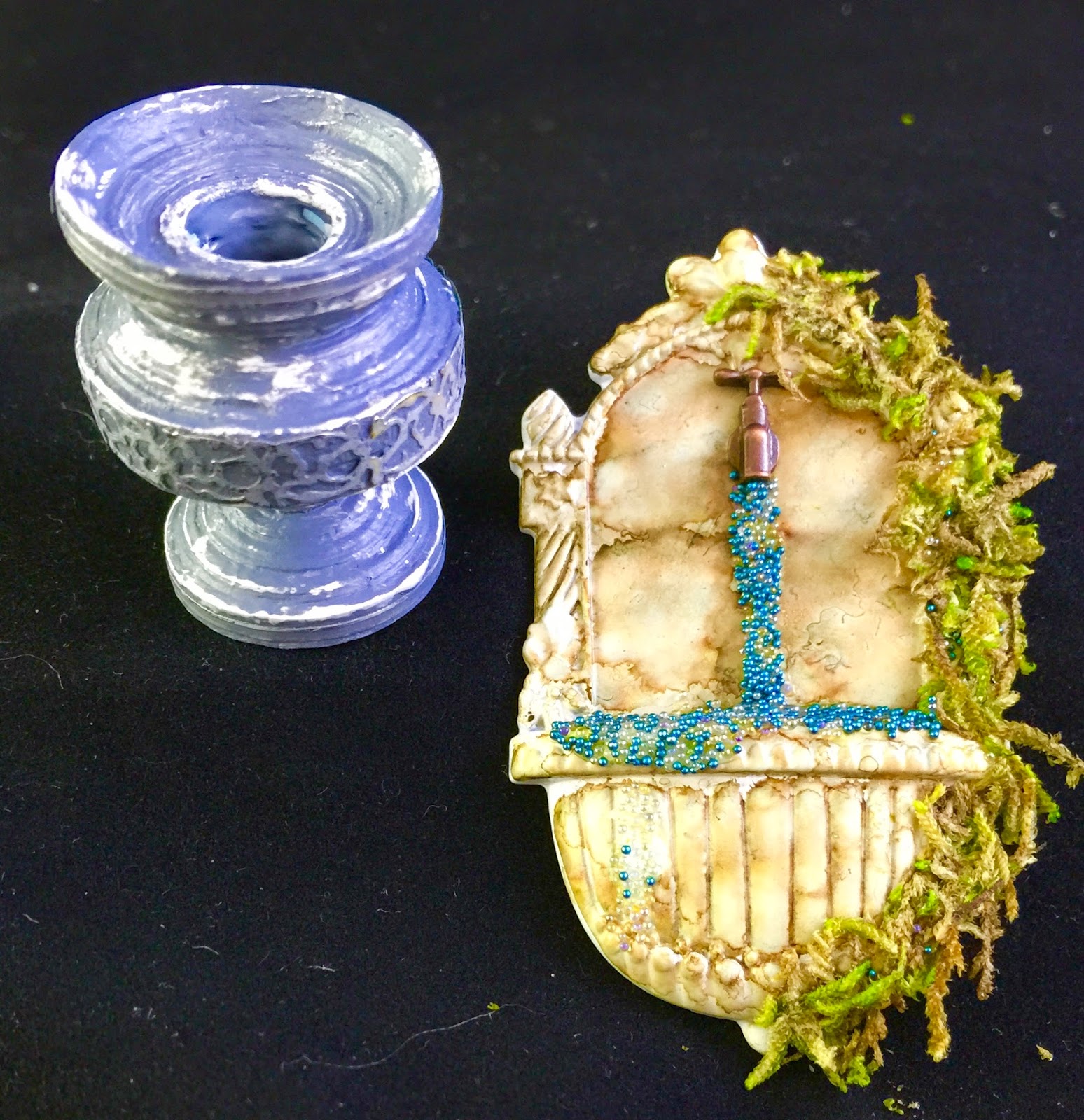 Posted by papercraftgoddess at 10:00 AM