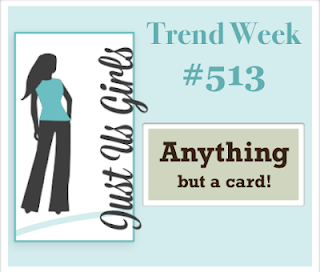 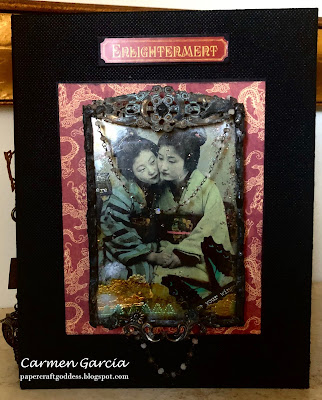 Now...BEFORE we get to the entry below...(the one whose title alone simply gives me the shivers...I do believe it's the most poetic and beautiful I've ever created) I'd like to turn your attention to one of my fave challenges.

Just Us Girls is hosting "Anything But a Card". So, let's rock and roll! I made a mini album for a friend. Which isn't the entry, by the way. Using the glass from 2 identically sized cheap frames, I enclosed fussy cut pictures (Graphic 45 Birdsong-which is BACK in stock, btw!!) along with Dresden scrap, mica flakes and a real set of butterfly wings. Then I distressed everything I could. Using copper tape, I taped around the edges then applied silver solder, adding the artwork around the edges. Taking 2 brass pieces, I bent and soldered them onto the top and bottom, then soldered 2 pieces of moonstone rosary chain to the top and bottom. 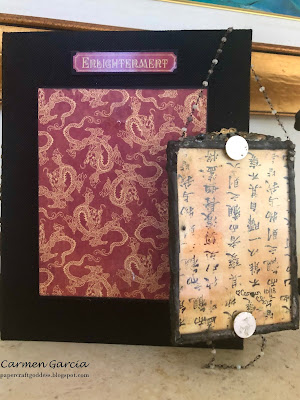 I was determined that this piece would serve 2 purposes. I'd never seen an elaborate piece like this on the front of any mini album. But I thought it would be a waste to just E6000 it to the front and just let it sit there. So, I attached 2 large, flat magnets under the paper on the front of the album and 2 to the back of the piece. Now, she could lift it away and attach it to something metal or hang it. That being said, next time, I'm going to experiment with magnets hidden between the papers on the detachable piece. I may have to use 4-6 of the tiny magnets, but it may work! We'll see. ;) 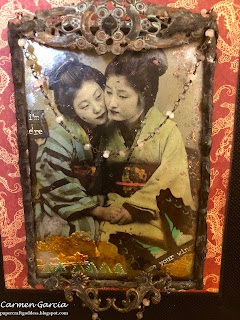 
The Spousal Unit found me weeping quietly with my head on my laptop. He knew something was wrong. He'd called me to dinner three times already. Being that the meal included copious amounts of gravy and I'd not appeared to cut a roll in half and load it up with mashed potatoes and gravy to make my concoction with the uninspired name of "Mashed Potatoes and Gravy Sandwich", the unit knew that something had occurred to rock my world. And not in a good way. Because there is no freaking way I would allow anything to stand in the way of gravy.

However, knowing this to be the case, he looked only mildly concerned with my non-response. There was no worry in the eyes of the man I'd married. But there was plenty of time for me to be angry and plot revenge. There were bigger things in my world at this moment.

"What’s wrong?" he said, already chewing on a chicken leg.
"He’s back!", I cried. "And I can’t find my font! And he won’t let me go until I do!".
"Oh."my husband said, still chewing. "Uh, I thought those new meds...",
"No!" I whispered, "He was just lying in wait. You know that’s how he rolls!"
My husband nodded and begin backing slowly out of the room. "I’ll save dinner for you then."

He began taking step by slow step out of the door
“Wait!” I called.
He stopped, foot in mid air.
“Put everything on the plate I like except for the gravy. Put it in the little plastic bowl and set it on the plate.”

Apparently, this was the moment fight or flight kicked in. He opted for flight.

As if he could outrun the crazy.

“Saran wrap,” I yelled “not foil! You know he doesn’t like foil!”

Many of you… And by that I mean the two or three who aren’t relatives (whom I’ve conditioned to read this blog using Pavlov's method of treats and electric shock) may have an idea as to what has occurred. I’m talking about him and his most cruel and exacting presence.
Yes. You're right. He was back.

I’m pretty sure we’d all gotten too confident he’d been banished by the last adjustment to my pharmaceutical cornucopia. For a year now, I'd been able to walk away from towels not folded in thirds, I could eat off of paper plates without portion dividers and could also thumb my nose at the kitchen table migration from under the hanging light that I used to confirm the table was in the dead center of the room.

In short, I was free.

But last night, he stole back into my life. Quietly. Then, he waited. If there's irony to be had, he'll wait for it. And irony, there was. It was the font. That's right, the font, appropriately named Minion Pro-515.

You see, when I came back to you after my two-year sabbatical, I had to re-learn certain things. One of those things dealt with the pictures I would upload for your perusal. After I'd posted several pictures, it occurred to me that I'd forgotten to put my name and blog on the photographs. It didn't take too long to remember how I'd done it previously.

I typed my name and began looking for the font I'd used previously. It was a pseudo-whimsical font but with a modicum of structure. It said “fun and carefree and not too self-absorbed with her art but one who would make sure her creation was to the best of her ability without behaving like she has a stick up her butt about the whole thing“

You didn’t know a font could say all that, did you?

I tried every font that Paint AND Adobe offered. After an hour, I knew I was in trouble. Having no other choice but self-immolation (which, since I'd survived this miserable summer, just seemed "too soon"), I sent it to the spousal unit so that he could use skills to pull the layers apart and identify my font. When he found it, I started searching. But out of the millions of Minion fonts, there was NO 515! There weren't ANY fonts that said "fun and carefree and not too..."

Well, I won’t put us through that again. You’re welcome.

After an hour, I called the unit (who was upstairs, supposedly working but actually watching the golf channel) and asked for his help. 5.2 seconds elapsed before he yelled "515 isn't available anymore but Papyrus is almost identical to it!"

And that, my friends, is what led me all the way back to the beginning of this ridiculously detailed post.

It didn’t take OCD long to tighten his claws on my shoulders and begin to whisper words of evil like "Papyrus" doesn’t look a &^%^& thing like Minion Pro–515!" to "Now you just look like one of the billions of bloggers out there. No fonts exist anymore that say "fun and carefree and not too..."

Not to mention, I feel like my nemesis-"He Who Shall Not Be Named" was somehow triggered by the unavailability of my beloved font. Therefore, a lawsuit against Adobe could very well be a possibility. Perhaps some legal action against J.K. Freaking Rowling, as well. She made gazillions using that moniker for fun. But this is my LIFE.

It's also a choice between a meltdown or gravy. And I think we know the outcome of that. Gravy can soothe most any heart, mind and soul.

Even the virtually nonexistent soul of OCD.