When I was a little girl, one of my favorite things to do was to ride with my father in his old El Camino and listen to him sing. He had his trusty Jack Daniels and 'Co-Ccola' tucked between his knees and an 8-track of whatever suited his particular mood.

Sidebar: Yes, he drank while he drove. But during the 1970's in McLeansville, NC., it wasn't an issue. In fact, one of the most popular places to eat was Knuckles Drive-In, off I-29 and McKnight Mill Rd. You could order a burger and beer while sitting right next to a Greensboro Police Officer, who was enjoying the same thing on his dinner break. You might even find Jesse Jackson working as a car-hop as he attended A&T State. The consensus remains that Jesse spent more time flirting with the ladies than he did actual 'hopping', but that's another story for another day.

Back to the El Camino, where Dad and I had our windows rolled down and the sun was beginning to set. Dad would reach into the glove box and pop an 8-track in and begin to sing. One of my very favorite songs, then as it is today, is from Bobby Vinton. "Blue on Blue". It was running around in my head today for no particular reason.

Though this card is FAR from anything I consider worth posting, it's the Father's Day card I tried putting together this weekend. While I don't care for it, I find I have to go through several incarnations of an idea before it works out. So, here you go, Daddy! I love you! 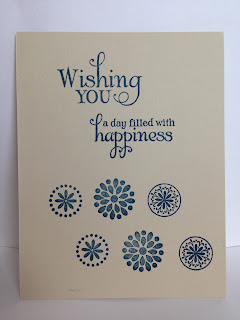 Posted by papercraftgoddess at 7:00 AM