...It wasn't a threat!!  I swear!!  I meant the good kind! For flowers and such and...
Sigh.
I'm pretty sure this is what all those school teachers were talking about during one of (the MANY) school conferences with my parents. I was either talking too much OR saying inappropriate things OR not thinking before I spoke and having 'unintentional, yet profound, impact on others'.

Seriously...It's wasn't either/or...it was all three. Together. At the same time.

Oh, come on...did you REALLY expect anything different??? This is ME we're dealing with here, people!

I'm working on a shadowbox secret garden. Using Graphic 45 staples and paper, I wanted to put something together that was unique and filled (mostly) with things I made myself. Hence, the Koi Pond and now, the urn planter and garden sink.

The garden sink is made by prima, but I gussied it up so I can feel pretty good about having a hand in customizing that. In fact, I'll have the tutorial for you tomorrow, if you're so inclined to take a look. :)

Today, however, is the day for my garden urn planter.

I've never 'quilled' in my life. Personally, the first time I heard it, I thought it had something to do with old writing quills.

Or a QUILTER with a lisp.

Anyway, I figured out that it's not that hard, and I jumped into making the base, which I shaped and stuck a toothpick into for stability. That was easy enough. It was the next part that threw me. See, I'd discovered these wonderful little urns HERE

WARNING: Don't panic. It's neither you, nor your wine consumption, that causes the page to look funny. It's in French. Wine consumption, at this point, would only be a negative if you started seeing the text in English. THEN there would be cause for concern, or flat-out panic...at least a LITTLE before you pass out.

Being a visual learner, I wasn't too concerned with my French being limited to "Commet alley vous, Mademoiselle." and "Sprecken zie English".

The problem was the little coils with the big holes in the middle. My Curling Coach was CLEARLY not set up for this. Fortunately, I knew the ONE place where I would find the right answer. And NO...it wasn't Pinterest. Remember, it was PINTEREST that got me into that mess in the first place.

I went to talk to the Dirty Girls as Splitcoaststampers.com. The Dirty Girls are what the SCS Design Team is referred to. As there is 12 on the design team at all times, it's called the 'Dirty Dozen'.  A 'Dirty Girl' spends 6 months in the 'Dirt Pile', then comes out as a master of all papercraft. Sort of like Kung-Fu, but without all the sweating and boiling pot of water to brand ourselves with some symbol of our mastery on our forearms; like a paper trimmer or something REALLY edgy...like a Scor-Pal.

I spent 6 months on the dirt pile, myself. Personally, I think they were really short last October, and they figured I MIGHT be less high-maintenance and less 'stalker-y' if they were to put me on it. But, whatever the reason, if THOSE girls don't know the answer, then there IS no answer.

In English, at least.

Sure enough, someone suggested coiling paper around a tube which was close to the circumference I needed. Which I did. Twice. Shaped them both to fit evenly, and one to fit  the coil on the wrapped toothpick.

Afterwards, I put a decorative sticker around the middle and 2 plain line stickers at the top and bottom for texture. Then, I painted it white (yes...I used different colors of paper...kept running out of the colors I was working with....then painted it a gray that I mixed with matte Mod Podge for sealing. After letting it dry for a few minutes, I lightly used a baby wipe to create some distress, and that was it!

So, my secret garden progresses. Here's a look at a little of the process. 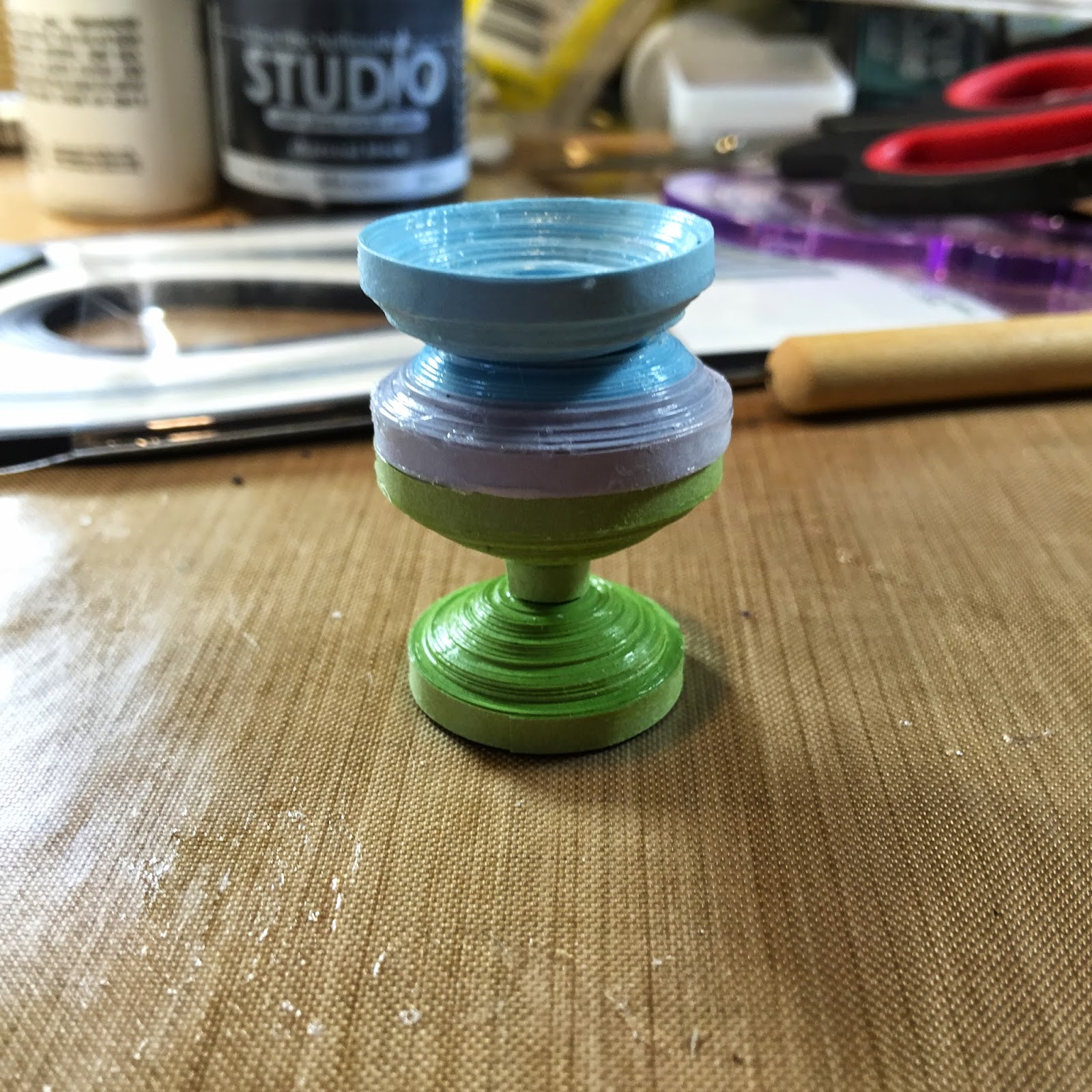 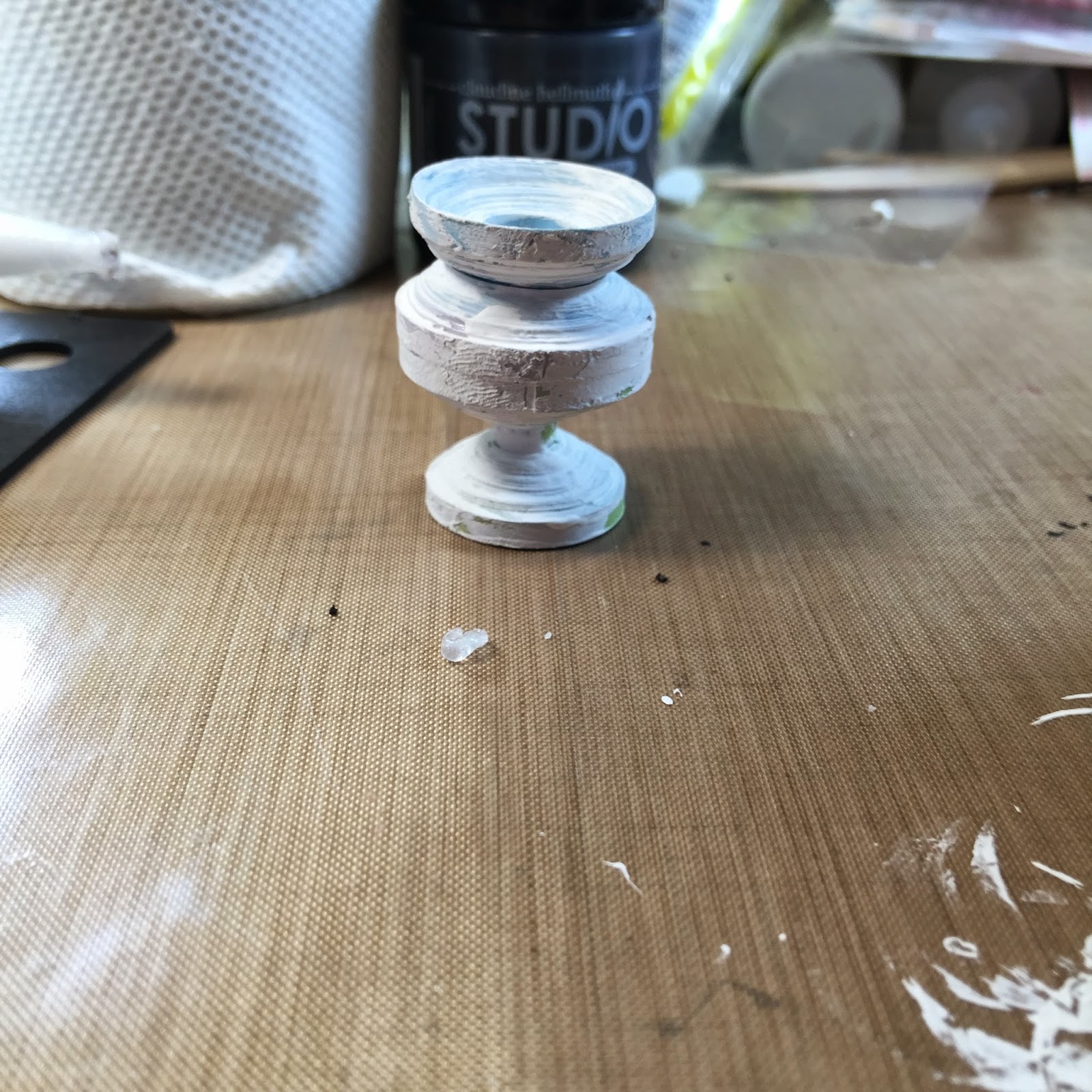 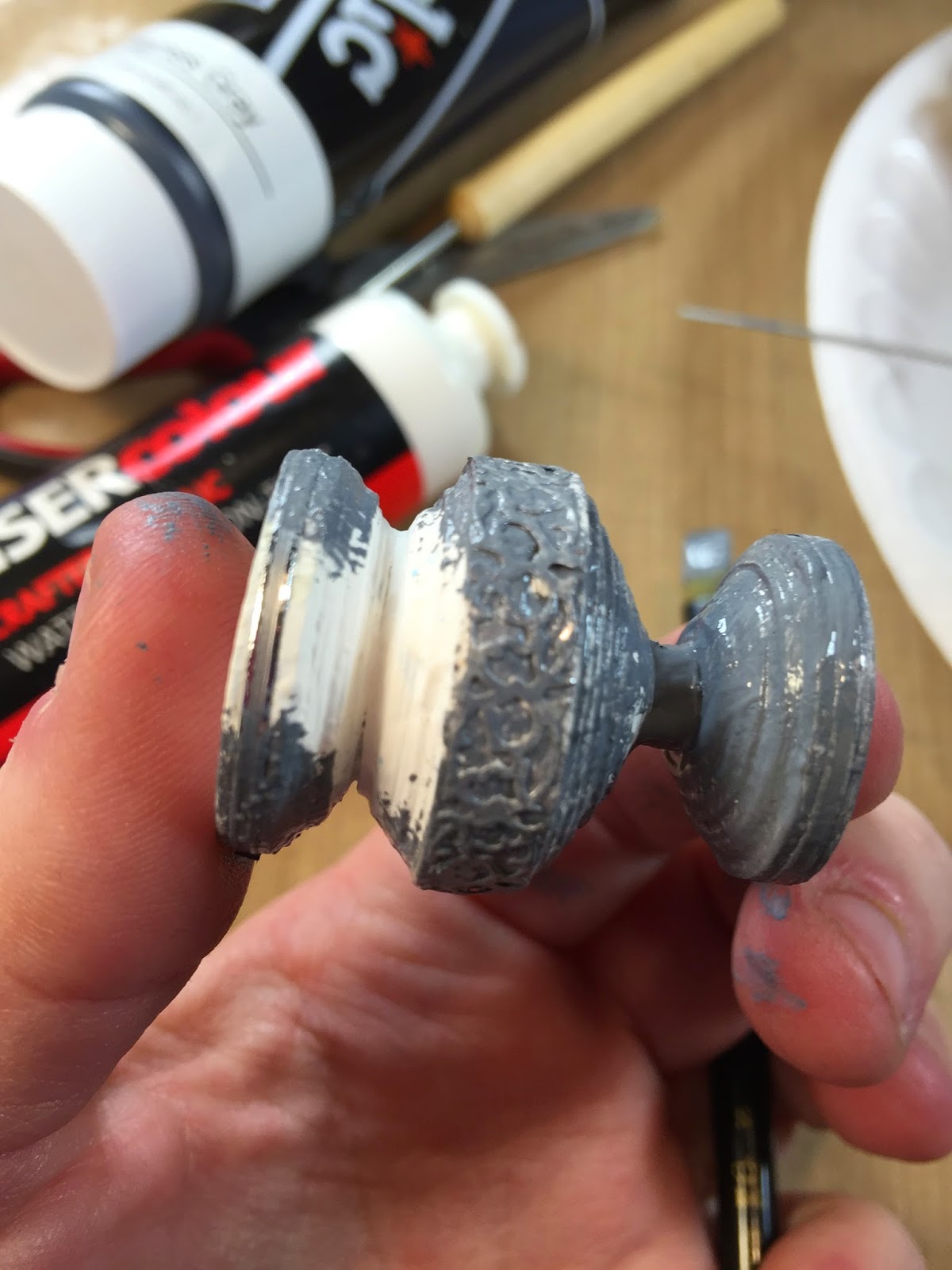 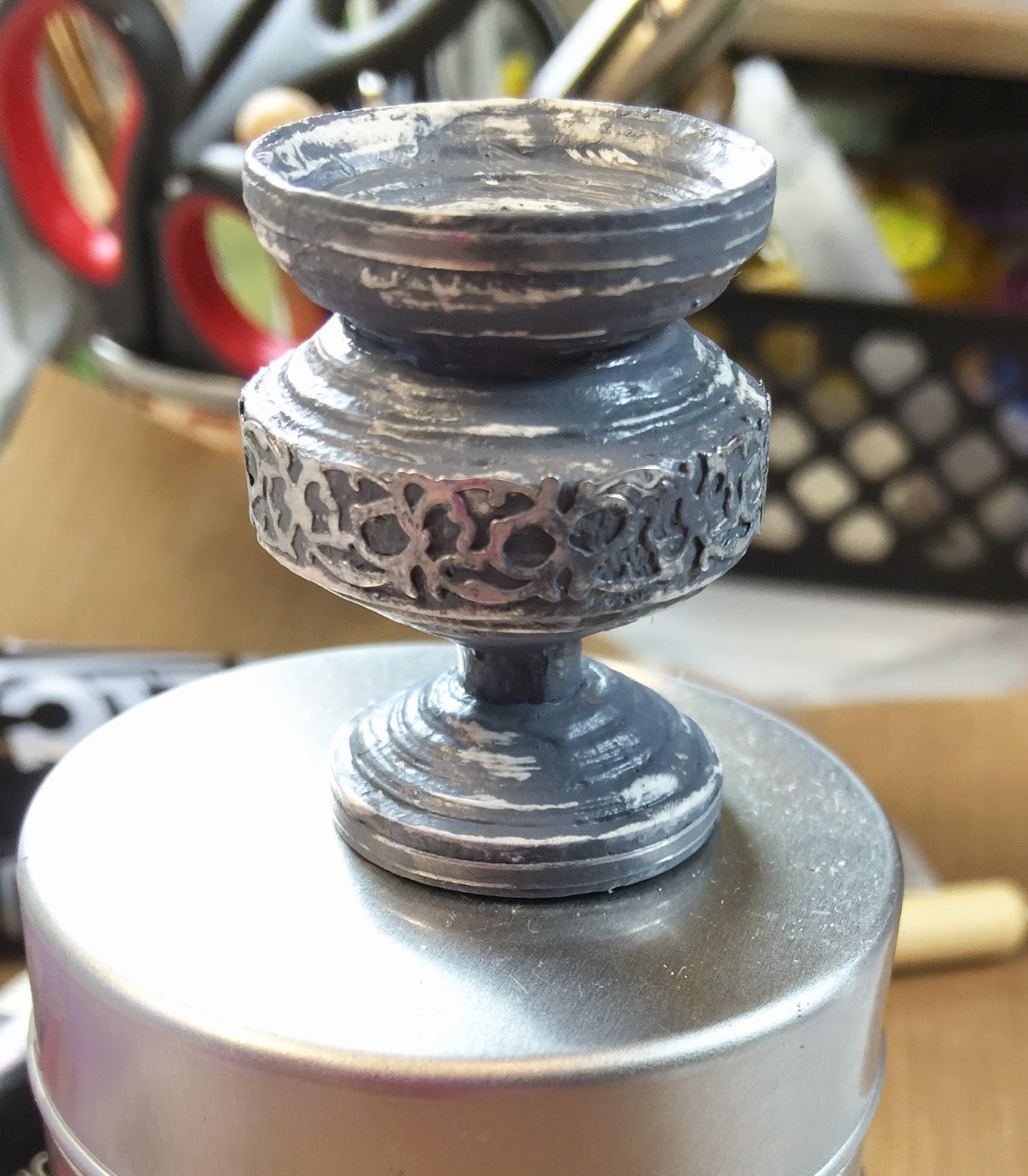 Posted by papercraftgoddess at 9:00 AM