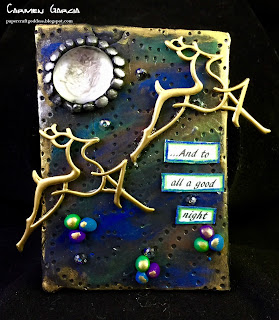 I am TOTALLY addicted to this clay medium!

Granted, I had to buy one of those pasta machines thingies to roll it out with because my hands STILL don't want to work properly after carpal tunnel surgery, but hey...when there's a will...

My significant other likes to say that the carpal tunnel surgery also rendered me incapable of folding laundry and cleaning. But when I pointed out to him that my trigger finger worked flawlessly, he quickly abandoned his attempts at comedy.

I used an EF of swirly dots to texture the background and my assortment of mica powders to go nutballs with on top of that. I really can't stop myself with the mica powders. I've been sliding toward a craft intervention for years, but the mica powders may have actually pushed me over the edge.

I grouped little clay balls for color and buried those crystal beads with that treatment that makes them flash different colors. DANG...why can't I remember the name??? Grrrr.

Anyway...they don't show up very well but they add some sparkle. It was the 'moon' I consider my artistic contribution.

Oh...get that look off your face. I mean the TREATMENT I used on the moon. I've not seen anyone else do it so I'm claiming 'firsties'.

Using a large, clear, glass thingie you usually put in the bottom of glass vases, I created the moon. But with it being clear and the clay being black, it was pointless. So, remember the last ATC I did where I experimented with baking shells into the clay and said the worst-or best-thing that would happen is that my stove would blow up? And it didn't?

Using silver metallic alcohol ink, I painted the flat side, let it dry, and pushed in into the clay. Then I baked it, hoping  wondering if it would result in some type of fireworks.

Since I'm sitting here and typing this and NOT being interrogated by arson inspectors, you can safely assume that YES...you can use alcohol inks on the underside of your crystals when using clay. Not a huge finding, mind you, but it's nice we can create our own colors now to coordinate, I guess.

I'm off to scour the house in search of other things to stick in clay and experiment with in terms of how explosion-y it might, or might not. be.

The things I do for art. Sigh.
Posted by papercraftgoddess at 12:16 PM