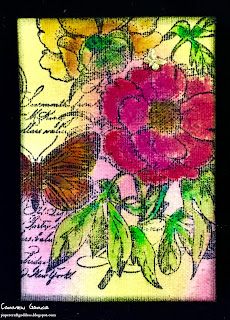 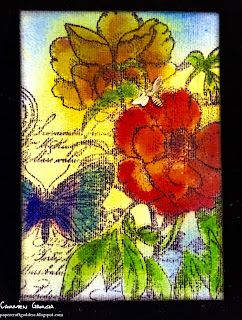 This was a technique I learned from Ellen Hudson's In the cLASSroom and altered to make it work for me.

Using the sticky canvas, I dry sponged 2 colors of ink on the background. Using my MISTI (which, I can absolutely agree that it is the "Most Incredible Stamp Tool Invented") I repeatedly stamped this Penny Black collage stamp until I got a solid image. Taking the same dry brush, I began laying color on the images. At the end, I hit it with my mister and as soon as the colors started bleeding, I hit it with the heat gun. You can always keep adding color if it's not strong enough. I didn't get as much bleed as I wanted, but I still love this effect. The tiny, brass butterfly on the pink and the bee on the blue-both on the flowers-gives them their names.

As you may be aware, we are experiencing-for NC-a veritable blizzard.

On a side-note, I lived in Minnesota for three years. Weather like this-combined sleet, ice, snow and inhuman cold temps-was called "September through June".

But here in NC, it's weather we are simply not equipped to deal with. Having 2-3 snowplows-for the entire state-there's just simply no way for us to clear everything up so that we can get out of our houses. We have truck and dualies that could slog through the Everglades. But snow? Nope.

Even if we could, we don't have the clothing (we THINK we need) to keep us warm. Seriously...did you think that the scene in a Christmas Story (where Randy couldn't put his arms down when he was stuffed in his snowsuit) was a joke? The ONLY inaccurate part was that he had a snowsuit! We were swathed in layers of socks-on feet AND hands (why would we buy gloves???) as well as our grandmother's shawl wrapped over our heads and tied behind our necks. We had to put on a pair of thermals under jeans and our grandfather's coat (because we couldn't fit into ours, such was the bulk) before being kicked out of the house to roam about resembling extras on the set of the Walking Dead.

PAM (pre-adderall moment)-My Great-Uncle Denson used to say that Southerners had a hard time with cold because we have 'thin blood'. I told him that was not the case...besides, the South extends a good ways up north. Having lived for a short time in Indianapolis, 2 blocks from the Mason-Dixon line, I argued the case for our Southern kin north of us. But Great-Uncle Denson was no fool for 'history'. He disputed my claim with cold, hard facts.

"Now see hyar," he'd say,"Ain't no southerner gonna intentionally declare some place in Indianner (translation: "Indiana") the place where the South ENDS. Ever-body knows that north of Richmond (Virginia) is where the food gits bad and them yankees sit around bein' loud and talkin' funny".

Great-Uncle Denson was a great one to expound on Southern history. Especially when he'd been fully hydrated by the sweet tea he always carried with him...in a flask.

Back to the weather.

I'm not sure if our blood is really 'thinner', but I DO know that I tolerated the cold in MN a heck of a lot better than I do here. Perhaps it's because it's common up there and no so much here. But I've come to think it's a genetic thing. As Southerners, we simply cannot function in any inclement weather. Be it rain, fog, snow, sleet, or any day that isn't 85 and sunny. It's best we stay indoors.

Let me amend that statement...it's best we stay indoors AFTER we descend on the grocery stores in order to buy up all the bread, eggs and milk.

Yes...you heard me correctly. Bread. Eggs. Milk. In that order. And that's it. Nothing else. Not even liquor. Mostly because every Southerner has a relative that makes hooch, so we're never out of that. Trust.

I've never understood why we HAVE to have those three items in a weather emergency. We could be stocked up with beans, soup, meat and snacks, but you'd think we were on the verge of weather-related starvation if we didn't have bread, eggs and milk on hand. The only thing I can think of that takes all three of those ingredients are French Toast. And who's going to spend their captivity...I mean, 'time'...with their family, eating nothing but French Toast??

But back to the stores...don't believe me? Just google it. There are plenty of pictures showing grocery stores in the South with bread, eggs and milk areas resembling war zones.

At any rate, with the sleet and snow, we may be in our homes for awhile. Most of us praying for a break in the weather to get the kids back in school, sometime before June.

Or at least before we run out of Benadryl to spike their French toast with.

Posted by papercraftgoddess at 6:16 PM