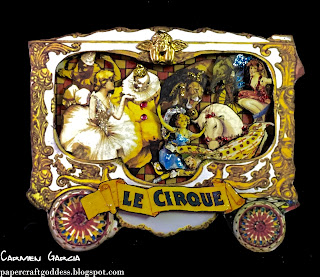 No. I'm not kidding. Seriously. I totally ran away with them, was found to be 16 after a week, and was put on a greyhound bus for home.

I know!!! You STILL think I'm kidding!! You think I'm making up the selling of cotton candy yelling "Yum, Yum...who wants some?" and I climbed up and down stairs at the opening, intermission and closing of the show!!! But I'm not! I swear!

It was the year that Ringling Brothers claimed they had a unicorn....remember that? It was a goat thing with a horn. I know this because I showered with it.

Sigh. I think I'm getting to the point where I'm not sure whether to believe my OWN stories!

But it's true. Look...here's how it happened.

The circus came to Greensboro, NC, where I was working as an usher for the Greensboro Coliseum. All of you who have read even a MODICUM of my blawg posts know that I have a little issue with ADHD, OCD and impulse control. If you DON'T know this, you've not met me or read any blawg posts, save this one.

I totally got caught up with the whole circus life, made some friends who invited me to join out with them (NOT join 'up'....in circus lingo, it's 'join out') and so I took off.

NOTE: My poor mother. It would've served me right to have all 3 of my boys to be carbon copies of me. I'm surprised she draws breath at all, nowadays, never mind looking as amazing as she does. To be fair, in the 80's, no one knew what ADHD and OCD were. It was assumed I was a wild child who couldn't be controlled. Which I was and you couldn't...but at LEAST now we know that a great deal of it was chemistry. My mother STILL tries to blame herself for not knowing these things but NOBODY did! She's a great mom. A REALLY great mom. Trust. :)

Each circus concessions person 'owned' their own business/stand. They were commission only. It was a HARD life. I rode the train to Virgina, marvelling at the tiny spaces the workers, and low on the totem pole performers, occupied. Gunther Gebel-Williams, the world-famous trainer, was still with the circus, I think (this would've been 1984) but he and his family had their own car on the train. I only saw his son (who was 12 or 13, maybe) who yelled at me when I stopped for a few moments to look at the tigers. I wasn't offended...I didn't speak German and knew I could kick his butt if necessary. heh heh

While taking a shower in Richmond, Va. in the coliseum's 'locker rooms' or whatever you'd call them, I heard a 'clop, clop, clop'. Know that the shower area was one of the open ones and I want to say it had at least 10 shower heads. Looking over my shoulder, I see the female handler of the goat/unicorn leading the thing into the shower, ostensibly to bathe it.

She glared at me and erupted in a blistering invective in some language I didn't recognize. Again, I wasn't offended. I knew I could kick the goat's butt.

Hers, not so much. So I cut the shower short.

Richmond was the only circus I 'worked'. The manager of the slum sellers (the group out in front that want to sell you all sorts of stuff) told me he knew I was only 16 and to go home. I'm not too sure I was totally upset with that.

It was an interesting experience, but one I never wanted to repeat. The truth is that the circus workers, and many of the 'supporting staff', were dirty and dangerous people. Many had criminal records and, keeping on the move, kept them away from authorities. Looking back, I'm glad that nothing untoward happened to me.

OR to the Gebel-Williams son and the goat.

HAH!
Posted by papercraftgoddess at 11:47 AM