I'm so proud of you!! You're doing a tremendous job of listening! I've pretty much decided to replace my children with you, so get to packing!

Oh, I'm just kidding. As if your significant others would survive my offspring for even 24 hours. Then you and I would feel terrible...not to mention possibly be facing manslaughter charges for agreeing to the swap in the first place.

As we ALL know, today is GIVEAWAY DAY!

Naturally, being that this is my first stab at doing something like this, I had a learning curve or twelve to deal with.

The most important was to give a TIME to end the giveaway. So, by default, the giveaway has to end at 11:59 on January 3rd, which is why you're receiving this post on the 4th.

Secondly, for the record, I was the one who won my giveaway on the first three draws. Therefore, I will refrain from answering posts on giveaway days.

When we built our home on a postage stamp-sized lot, I said "To Hades with a dining room! No one EVER uses a dining room when they have an eat-in kitchen and 3 young y-chromosomes who will scale the drain pipes and jump to the ledges of their second-floor bedrooms in order to eat in their beds.

I have to say it took me awhile to catch on to the fact they were consuming mass quantities of edibles in their little hibernating spaces-because every bit of food left over they made sure to either consume on subsequent nights OR they made sure to vacuum up, so their rooms were ALWAYS free of food particles!

1:a machine that sucks up food debris from rooms inhabited mostly by y-chromosomes.


"I had to make sure to get the vacuum to take care of the Ding Dong I crushed into the carpet 2 weeks ago." 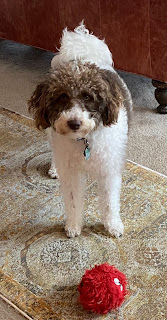 Sorry...back to my house plans that were keeping you enthralled, I'm sure.

I walled in the dining room and made a study. Well, actually, a playroom, since the kids were small.

When they got older and began to secrete oil and smell...interestingly...and slunk off to their rooms to grow in darkness like the darling little...fungi...they were that I decided to conscript a small portion of the room (a card table and 3 drawer unit from Michaels) and begin stamping.

I began by calling this room from whence all of my artistic endeavors did manifest "The Craft Room".

Several years later, I decided that the name was too casual; too folksy. I felt I was starting to really churn out art. So, I renamed it "The Art Studio".

What I didn't realize was that my snot-nosed children/spotted fungi had their own name for my sacred space.

(now they were just saying it because they liked saying Hell) 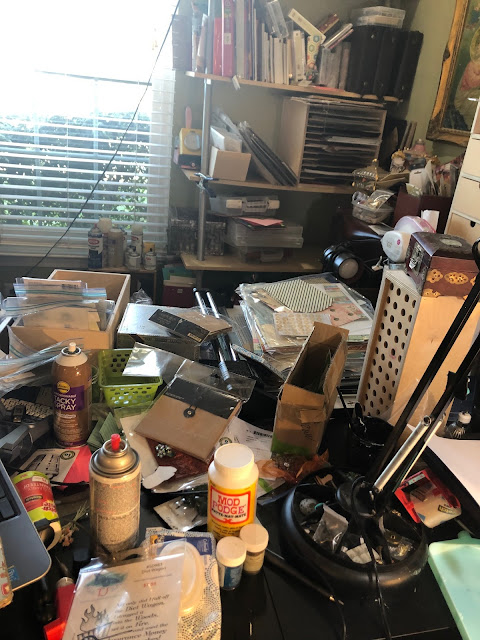 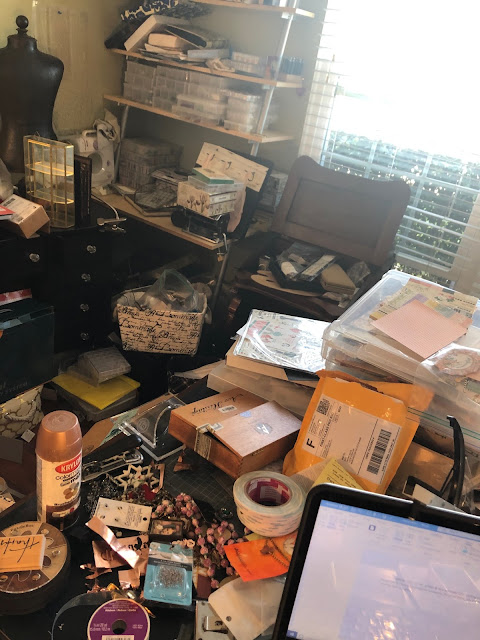 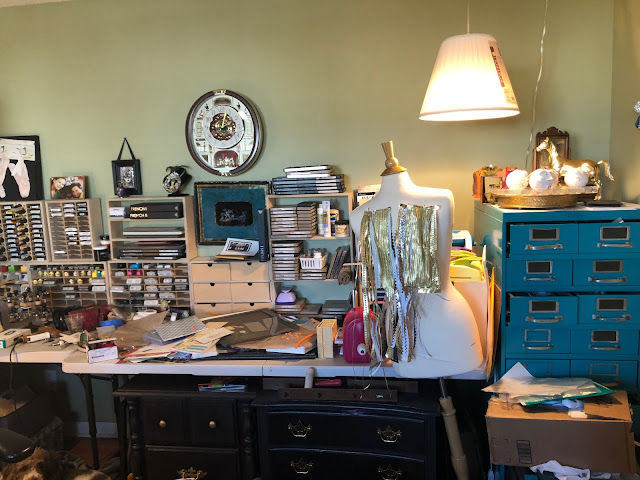 Bet you didn't even notice the "vacuum" in the left hand corner, did you? 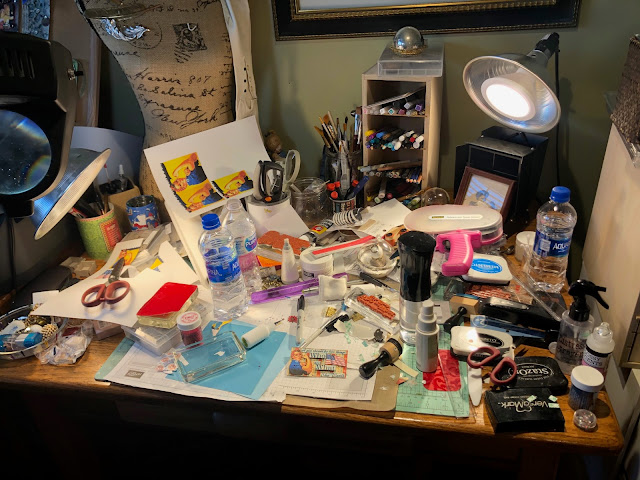 (The project I'm working on is the paperweight at the bottom of the desk. You may wonder how I work in that tiny space. Yeah. Well. So do I.)

I guess I would have gone to seek some type of redress against them but it does get a little difficult to...ah...ahem...disentangle myself from my room and its materials.

So, the next couple of days, all I hear from the y-chromosomes (to include the spousal unit, who should KNOW by this time to NEVER pick sides...or even SPEAK when it comes to my hobbies, especially when he plays golf and I know for a fact that ONE of his putters is from some Scotty guy and starts at 4 figures) is that I should sell lots of stuff on ebay. You know, cut my losses and take the cash. The spousal unit really liked this idea.

Number one: I HATE selling stuff on ebay.
Number two: I will NOT give them the satisfaction.
Number three: I love you ladies
Number four: I wanted YOU to have it.
Number five: I loved the look on their faces when I told them what I was doing and the retail cost of the packages.

Due to the utterly abysmal turnout AND the fact I need a little more space, I'm sending the rest of you something as well. So, I have lovely runner-up prizes for:

PLEASE be so kind as to send me your address to the email above. Look at it as a kindness to me. (Believe me...this is only the BEGINNING of a guilt trip...for being Gentiles, my mother could throw a guilt trip that had Jewish mothers taking notes so don't get me started ladies!) Thank you for your understanding. Mmmmwahhhh!

Oh! And before I forget...I've got another awesome giveaway (aka "getting rid of more sh*t in this horror of a room) coming up in 2 days. AND I'll tell you this...get someone to sign up and tell me you're the one responsible in the comments section and you'll both get FIVE entries. Sign up two and they'll get five and you'll get ten. And so on and so on!

Have a wonderful weekend and I'll see you on Monday with even MORE goodies!!!


Posted by papercraftgoddess at 12:01 AM