Looking Pretty and Drinking Whiskey-How REAL Women Do It 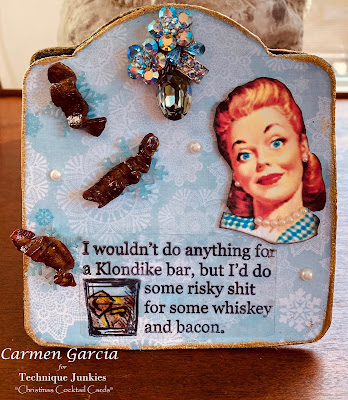 One of my favorite sayings used to be, when a woman would ask a man if she could help with anything, he'd say "No, you just sit there and look pretty."

Of course, nowadays, you can not only sit and look demurely pretty, you can also hit that sucker with a lawsuit big enough to show him "pretty".

Naturally, the above scenario only applies until you're 35, according to my 86 year-old Great Aunt Pearl. She told me once "It's only sexual harassment until you're 35. After that, it's a compliment."

HEY...don't yell at me!! I'm the messenger! If you want to yell at Great Aunt Pearl, you have at it. As long as you realize she will...and I quote..."take this here cane and knock you into next week so hard that neither one of us will know the day you'll land on."

So, good luck with that.

My posts are going to be just a TAD bit short over the next few weeks. I've got outpatient surgery on the 23rd (that's tomorrow) so I've got to put lots of stuff together to for upcoming posts. Mainly because I'm not sure that writing blog posts while high as a kite on Oxycontin is a good idea. I mean, really...you people see what I write when I'm sober and supposedly controlled by various medications! Just imagine taking those away and doping me up with opioids!

Dang. The more I think about it, the better it sounds.

STOP TRYING TO CONVINCE ME, INNER VOICE OF TRULY BAD IDEAS THAT COME TO ME UNDER THE GUISE OF ARTISTIC EXPERIMENTS THAT END UP WITH NUMEROUS REPRIMANDS FROM MY MOTHERS AND POLITE, YET DISDAINFUL COMMENTS FROM STAMPING ASSOCIATES WHO COMMENT ON THE ART BUT WILL REFUSE TO MENTION THE ACTUAL POST!

This is my last January release post for Technique Junkies. It's called Whiskey and Bacon.

So, let's start with what this is, exactly...

It's a bar recipe booklet! 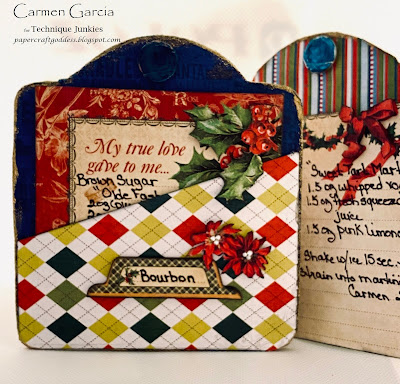 I found these brown cards at Hobby lobby, created the folders with paper, copied the recipes and attached them with large magnets 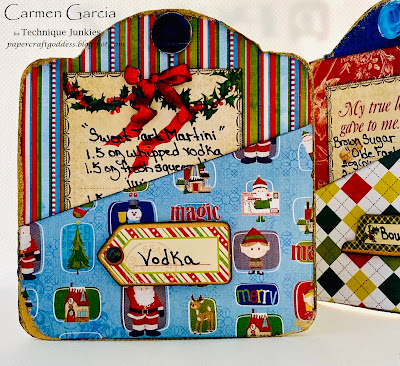 I think the magnets were a good idea. The booklet stays together but then I can pop a page out easily then stick it back. No connections to fray and break. I used to be a big fan of hiding my magnets under the paper, until I saw they started pulling through the paper and wearing it away. Not such a fan, anymore. Just let em' show and color with some Copics. They may not be perfect but it's better than having them rip through the paper and mess up a lot of hard work. 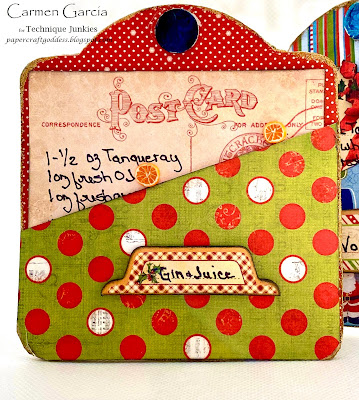 But what I REALLY want to talk about are the oranges above and the bacon on the cover. Specifically the fact that I made those suckers out of CLAY.

That's right. Clay. By myself. First time ever. Watching these two YouTube videos.

For the oranges, I blame thank
this talented lady
(and I really DO suggest you quickly scroll through this video...I had NO idea how these clay fruit canes were made. Now that I do, I totally regret respect knowing what's involved)

For the bacon, that my HFA (high functioning autistic) kid thought was flying poop, I thank
this person

I'll have you know that once it entered my brain that I had to have bacon and oranges to accent the booklet and upon finding that within the vast reaches of this "art studio" (that many refer to as an
s-h-i-tut-hole on a good day) I had neither one available, then I had no choice but to make them both. Since the only available medium I had available was clay, I spent a total of 4-1/2 hours total to make them both. Or twice as long as what it took to make the book.

Oh, the things I do for you people.

Hold up. didn't I say this would be a short post??? I believe I did! So let me wrap this up. I've got some underwear, dental floss and conditioner to pack. And deodorant. You know, the important stuff.

At any rate, since I just give and give, let me do one more for you. If you use my code at the bottom, you will get 10% off anything you order at Technique Junkies! 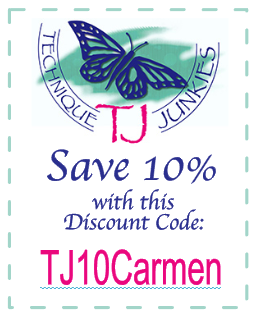 Posted by papercraftgoddess at 8:46 PM