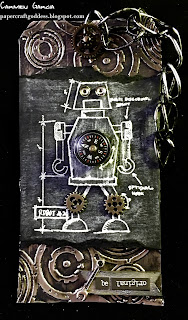 This year, I swore to myself that I would be more daring, more original, more versatile and thinner.

I realize I might as well as sworn to be a billionaire and President, as they're just as likely to happen as the other four.

But hey! I can always try!!

I've never done Tim's tags in their entirety before...this year, I'm going for it. I'm really digging mixed media and want to incorporate a lot of it into the 3D work I'm currently NOT doing at the moment. And with that non-existent 3D work, I'd like to transfer the texture ideas to the jewelry that I'm also NOT making. By the end of this year, I suspect I'm going to be an absolute genius in all of these areas in which I'm doing nothing.

I'm telling you...I'm TOTALLY rocking the nothing this year!!

Anyway...I cut self-adhesive foil into sections and attached it to the top and bottom of the tag. After running it through an embossing folder, I covered it with distress paint and wiped some off to show the pattern. I stamped the robot in versamark and used winter white antiquities ep. I covered it all in chalk and wiped it off. The best part was finding the gears and little compass to 'assemble' him with. His eyes are the little dew drops, of which I have a couple million.

Side note...dew drops are something you MUST be careful with. Not because the kids or pets might swallow a few, but because they secretly mate when you're not looking. Then, several weeks after you've purchased a small bottle of 100 or so, you have 10k of them spilling over the containers, onto the floor and ready to give you a heart attack when you vacuum over the suckers and they make a racket loud enough to make you think you've taken out a wall or something.

Sorry. Back on topic.

I found this lightweight chain in the trim dept. of Hobby Lobby and sloshed some black alcohol ink to damp down the bright silver and, using a gear and long brad, attached them to the top. That'll look cute on a kid's birthday gift, don't you think??

Dang. I totally JUST broke my vow to not lie. Because I would NEVER put this in the hands of a child who will throw (what ends up being about 20 bucks and 5-6 agonizing hours of work to put together, photo, upload and write about) in the trash.  No way. Not even my OWN kids will get something like this.

I finished off with some gears on the legs and taking a wooden embellie that I embossed with silver ep, I took the sentiment from Tim's Small talk book, cut it in half and flipped the word 'original' upside down. Because leaving it intact made me feel that it would look like I TOTALLY did NOT get the message to begin with.

I glued a small wrench charm to the edge and called it done.

And no...you cannot ask WHY I would have a wrench charm in my stash. Mostly because I have no idea.

Although, I wouldn't put it past those %$&#*(&$( DEW DROPS having something to do with it.
Posted by papercraftgoddess at 9:56 PM