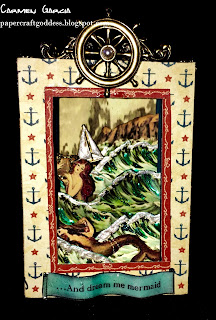 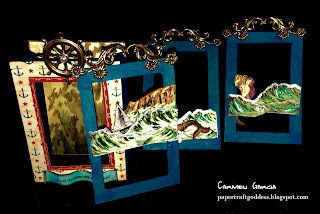 I think I may be dying.

See, as a child, whenever something wonderful was on the horizon...a vacation, amusement park visit, etc. I would constantly worry that I would die before the event would take place.

I remember being so excited about taking a train trip to Atlanta, one weekend. We had to be at the station at 1am for a 2am departure, so my parents set the alarm for midnight. Needless to say, I couldn't sleep. I tried to read to pass the time, but too worried for it to help much. All of a sudden, I heard a TERRIBLE noise and knew that the end had come...I was going to die and not get to go to Atlanta.

And yes...the irony of that statement does NOT escape me. Most of us would rather die than go TO Atlanta, nowadays. But remember, this is childhood.

You know...back when we had HOPE.

Anyway, I prayed death wouldn't hurt too much and gritted my teeth, waiting.

The noise stopped. Turned out, it was the digital clock's alarm going off to wake my parents.

Through my 20's and 30's, while engaged in the sport of "Long distance Therapy and Counseling Marathons" (don't laugh...I placed top three...only behind my mother and ex-husband) I discovered that this isn't uncommon to some children. We know that there is but one thing that can take away an upcoming, exciting event, and that thing is death. Ergo, we become afraid of dying as the event nears.

Now, of course, I realize there were MANY things that could've disrupted those anticipated events: Weather, unexpected financial upsets, Democrats...all of these things had the potential to wipe-out any future plans. But at the age of 8, I only knew the occasional thunderstorm and 'economics' only meant that I needed .99 cents for the latest Shawn Cassidy 45.

I didn't know any democrats.

As an adult, I WISH I had enough awesome things on the horizon that would make me fear the disruption of death...as opposed to praying for it. You know, the things we USED to get really excited about as kids, that are now the things we're willing to look up to Heaven and tell the Lord we're fine with checking out if He needs a volunteer. For example, school snow days (now, I suffer through them with 3 rambunctious boys at home) awesome vacations (that usually end up with us on the edge of bankruptcy) and Christmas (with both bankruptcy fears AND 3 boys hopped up on sugar who can't wait to try out their air soft guns...on each other...in the house).

It started with my being accepted into a VERY cool ATC swap group. These ladies are very talented. So, they either think I am too, or it's time for their random acts of kindness, in which they show mercy to someone who simply won't go away and quit bugging them, so they make you a part of the group. Mostly to keep an eye on you.

Needless to say, I'm going with the former. TY http://blissfullatcswap.blogspot.com/

Next, I find I was one of the Tim Holtz Tags of 2016 winners! I was thrilled! I think you get a gift certificate, but it doesn't matter. Just the fact I WON (and get a blog badge!! Woot Woot!) is AWESOME!
It's not that I don't appreciate the gc, but I have a 5/20 ratio when it comes to gift certificates. For every 5.00 on the certificate, I spend 20. I think that's fair. For some reason, my husband is NOT supportive of this economic policy. But he doesn't say much. He learned quickly that the more vocal his opposition, the more difficult it was to locate his Driver and #3 Iron.

I actually tried something, and it worked out EXACTLY as I wanted it to.

I've been trying to created a tunnel book, off and on, for months. Each time, I failed. So, being into this atc thing, I thought I'd try again on an ATC. I hadn't seen another one done with an atc...I mean, I'm sure they're out there, but I haven't seen one. So, 2 days ago, I started.

When I say there was a lot of trial and error, you can rest assured I'm not exaggerating. I used so many cuss words, and even created a few new ones by combing some of the old and reworking them (good Lord...I sound like I'm writing a tutorial) that I should probably be digging around for my rosary about now. I'm sure a few (hundred) Hail Mary's wouldn't hurt.

And I'm not even Catholic!

Sigh. Sorry. Back on topic.

I wanted to make an atc mermaid tunnel book that would lay flat, AND that you could also take the slides out of if you wanted to. AND, I wanted it it to boast a very solid construction, unlike most of my 3d ideas that LOOK good but are actually TOTALLY unsafe.

I wanted to do all these things.

And be darned if I didn't do it.

Front and side view folded flat. 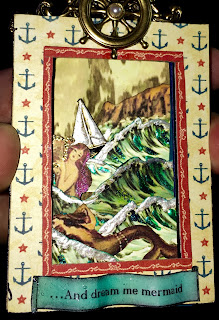 Now don't go ruining all of this and asking me 'how'. Mostly because I'm not too sure what the answer to that is. I just know I ended up redoing the front and back twice, the folded cardstock on the sides 3 times and the chipboard inserts 5 times...EACH...trying to get them to fit correctly.

I had a little brass ship charm that I painted with Liquid Pearls and copics and attached to the last frame. The sentiment is part of a verse by Adelaide Crapsey that I credit after the post. Graphic 45 By The Sea is what I used for decorative paper. The brass ship wheel charm was also in my findings and I added a pearl accent.

There WAS a desperate moment, mind you. I had everything looking right, but the slides kept falling out of the bottom. Miraculously, I had 3 brass findings that I glued to the top of each, that just happened to look a little nautical and prevented the frames from sliding out of the bottom. See? NOW you know why today was a day in which I feared death. It was, by far, the PERFECT day. Granted I'm old enough to know better, but that child part lives on, as well as some of those old, silly fears.

But just in case, not wanting to tempt fate, I'm definitely going to make sure it's not TOO perfect a day.

I'll totally make sure to weigh myself before bedtime.

Sentiment is from "Verse by Adelaide Crapsey"
“Sea-foam And coral! Oh, I'll Climb the great pasture rocks And dream me mermaid in the sun's Gold flood.”