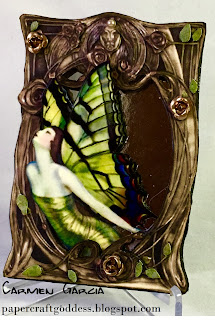 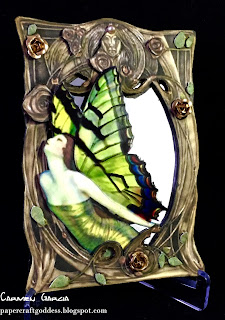 I want to start by explaining WHY I have two pictures of my final ATC in the Blissfullatcswap.blogspot.com. It's fairly simple, actually. I like the one with the white background and the husband likes the black background. Granted, it's not that I ever listen to him, but since I'm still not quite secure enough in my art to totally DISCOUNT everything he says  (as is my usual M.O.)  I put them both in and left it at that.

You know, just in case, for ONCE, he's right.

Okay, okay...that was a bit harsh. Especially when I'm counting the minutes until he gets home and can deal with the stink bug that is now residing in my sunroom.

I KNOW the stink bug is still there because I set my little high-functioning autistic kid right outside the room so that he can keep track of it. You see, the stink bug seems to KNOW when my husband is home, and immediately hides. When the husband leaves, the stink bug is back out, and flying around the house specifically looking to torment either Liam or myself.

We have a 4 bedroom house. My craft room is downstairs. While our house isn't huge, it has got enough space for a stink bug to pretty much have its run of things. Wouldn't you think that would be the case??? I would! That's why, for the life of me, I can't understand why it would somehow track me down in my craft room and wait until I'm in the middle of a pretty touchy project, and move just into my periphery and sit there and stare at me. Until I notice it, that is, and run screaming from the room. If I'm lucky, the husband will come down stairs and escort the little *&*&(^*( out of the house.

Sidenote; No...I have no idea how he transports the thing, nor do I care. The only thing I refrain from asking is whether or not he actually touched it. Because if he did, I'd have to divorce him.

Sorry, but some things you simply cannot get over. And a man who handles a stink bug is a man who will never touch me again. Of course, to be fair, we ARE married with three kids, and all touching is pretty much obligatory at this point. STILL...it's the principle of the thing that must be upheld. If I let him off the hook, then my kids will insist on keeping them as pets, and the next thing you know,someone will accidentally swallow one and I'd never be able to kiss my child again and probably have to put them up for adoption. Which is NOT easy when they're in their teens.

Sorry...I've been out of Cymbalta for a couple of days and things are getting a little surreal.

There is NO way I can sleep with a stink bug loose in the house. All I can see in my head is one running in my nose, ears or-God forbid-my mouth (retching) and that would probably push me over the edge. And since all of you know me as operating pretty dang close to the edge already, well, NO ONE wants to see me pitch headfirst into the abyss. Not even that stink bug. It would have no IDEA what kind of hurt it would be bringing on itself in that case. Bottom line....I have a .380 Smith and Wesson and I'm always looking for moving target practice.

I'm aware that SOME of you do not understand my feelings toward one of God's creatures. To be fair, however, I'm not totally convinced God signed off on something as awful as a stink bug. First of all, it contributes NOTHING to society. It's an ugly stalker of a bug that you can't bring yourself to stomp on because of the disgusting smell it leaves behind. Hence, the name. This is a bug that will do whatever it takes to track you down, time and time again, until you develop the some weird tic where you jump every 30 seconds because you're convinced you've seen it sitting there...mocking you. And never mind its obvious magical ability to disappear on a whim, only to come back when you're in a totally impossible position to consider fleeing...ie: in the tub, in the middle of heat embossing, in the final moment of winning an argument with your spouse/kid/mother or with one leg in a pair of leggings and the other one, out.

I'm telling you, people. they are devious and evil.

Fortunately, we have one...and only one...defense against them. And that is soapy water in a spray bottle. That's right, you heard me. A little Dawn and water and a long reaching spray bottle. Apparently, the dish soap eats through the (swallowing hard) oily layer on its body and, though it isn't instant, it WILL kill a stink bug. Unfortunately, they usually start flying around, which starts me to screeching and running around and doesn't really help anything (except make me feel better) but I DO take comfort in knowing that this method does make them die in a slow, horrible way.

Hey...I'll take happiness where I can get it.

Sorry, but I've got to wrap this up. The kid just informed me the stink bug has disappeared from the sunroom, so I've got to grab my children and begin the stink bug emergency evacuation procedure. Which is to get into the car, go out to dinner and drop in on the neighbors for a visit until the husband gets home, or the neighbor gets a clue and comes over to take care of business.

Either way, I've won the battle.

About the ATC:
(which I sometimes forget is WHY I started all this anyway)

Art Deco mirror frame and butterfly girl are collage pieces. I printed her out on a transparency sheet and cut the wings out, coloring them with copics before using glue dots to attach. I glued first frame to silver mirror cardstock, with part of girl underneath and used another frame with mounting tape on top of that. I cut out the mirror face and flowers to layer and used a die cut branch to cut small leaves from. A few metal flower embellishments and it was done. It's a quick project...when you're NOT standing up every 32 and 1/2 seconds to make sure the stink bug is where it's supposed to be.
Posted by papercraftgoddess at 6:30 PM