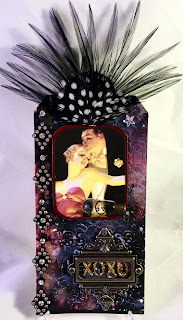 It's time for another Tim's Tags! Here's my February entry.

Lately, I've been in this Art Deco phase.

Well, not really a 'phase', mind you. A phase would be imply that I was actually doing a series of projects that had one or more design elements of Art Deco in them.

And we ALL know I'm certainly NOT doing enough of anything to qualify as a series.

This is my tag for February in the Tim's Tags 2016 challenge. He's doing sort of a mishmash of techniques, back from when he revolutionized crafting and renamed our junk drawers 'stash' and the crap that fills them to overflowing 'ephemera'.

The more I think about it, while Tim's inventions have been terrific for people like me (who never thought they could do the 'art thang'), I think his success stems directly from convincing us that we CAN do things we never thought we could, by inventing products and styles that look cool no matter WHAT level of artist you are.

Aaaaand he gave us billions of dollars of products to do it with.

Look...I love the whole artist experience. But when I can buy lots of stuff that all coordinates and makes it impossible for me to mess anything up, well, that's just genius.

Tim's entire design line works perfectly together!! There's nothing to really figure out or guess at... it's like the "Underoos" of crafting!!!

Come to think of it, that's either the best-or worst-compliment that one can receive. Don't you think?

Not that Tim minds, I'm sure. I've not met him, but he seems like a fun guy who would probably dig the Underoos reference.

And, if he wasn't too crazy about it, a good night's sleep on his mattress stuffed with 100 dollar bills will make it palatable in the morning.

Now for the tag-

I used black and red distress paints and, when dry, stamped his valentines stencil in white stain over it. You can see the "U" of "I love you" at the right of the picture, and the letters ISS for "kiss" underneath the photo and to the left. The overstamping is great but a BEAR to photograph. Then I embossed it with my art deco embossing folder.

The XOXO is gold embossing paste/powder and I just added one of Tim's stars and frames to set off the picture of the couple by Lyendecker. That fab feather at the top was in my 'stash' and was what set me off on the whole theme..

You really SHOULD come join us!!! No pressure and a LOT of fun. Plus the excuse to throw down and buy lots of new stuff to play with. And who isn't up for that???
Posted by papercraftgoddess at 4:41 PM