You HAVE to believe me when I say I've really got some AWESOME things in the works.

Okay, I have TWO awesome things in the works.

I know this because it's almost done. I'm about 30 minutes from being completely finished with it. That being said, it'll be a couple of days before I can actually call it 'done'. Mostly because I ran out of Dresden trim, and I happened to run out when the third ATC was halfway finished. Naturally. So I'm waiting for an EBay delivery. Such is my life.

So, I figured until then, I might as well attempt to entertain you with the blog equivalent of 'elevator music'. You know, that same elevator music that plays when you're trapped in some sort of purgatory (an elevator, on hold, a dentist's chair, this blog) and you can't get out. I'll do this by sharing a bit about one of my favorite writing subjects:

I'm not sure it's that I truly enjoy writing about them or that I'm subconsciously documenting for a future legal defense, but I do it a lot. And because my children are...precocious...(a nice way of saying they are off the flipping chain) I always have plenty of material. The funny thing is, the one question I get the most, is how much I'm actually exaggerating about my children and their (mis) deeds.

Let's go to the tape, shall we?

Thank GOD I have pictures...and video...to back all of this up.

Autistic kids exhibit brilliance in many different areas. Liam's forte is subverting the parental controls on YouTube and memorizing every questionable video he can find. That kid's mouth is so dirty that if I tried to wash it out, he'd make the soap cry.

Fortunately, I can pass most of it off as Tourettes. Granted, he doesn't have Tourettes, but I'm not a girl to let pesky facts get in the way.

Liam is kept in check-at school-by a angel known as "Mrs. Quick".

**NOTE** Yes, I'm aware I wrote that my kid is kept in check 'at school'. And that's the truth. At home, I spend a lot of time pretending to be hearing impaired and devoting great chunks of time to learning a foreign language. I figure one day, something will click, and I'll forget English entirely and not have to worry about anymore inappropriate or offensive comments my little bundle of joy seems to have an unlimited supply of.

THIS is the class picture we just received. I have to say it's one of the better ones. See if you can guess Liam and Mrs. Quick: 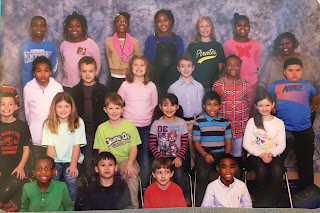 Yep...that's him on the right. Apparently practicing the 'perp walk' that may come into play at some point in his life.

Now, Liam is mostly happy. And by happy, I mean it's partly this: 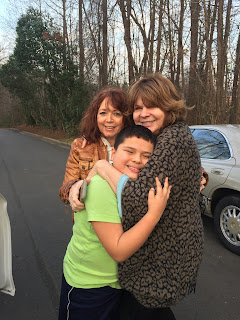 (TOTALLY sucking up to Nana-who is 70 and looks younger than I do...talk about a double whammy)

Aaaaannndddd...there's the 2nd part of 'happy' that manifests itself in a love of making videos. Completely inappropriate videos.
Well, not completely...he IS mostly dressed. Normally, Liam runs this place as 'clothing optional', but we had to put a stop to it when he decided that making movies was his passion.

WARNING: No inappropriate language or nudity, but Kermit the Frog's suicide might be a little shocking for some.

I think we've reached a good stopping point. And by that, I mean "a good time to take a Xanax break".

I'll be back later on with the rest...the Melted Snowman Cookie Murdering Tween and the 17yo who can't bring himself to pass homeroom, but somehow became a Constitutional scholar who somehow managed to memorize every state and federal law regarding the welfare of children. Try to ground this kid and he'll beat you to death with legal statutes until you're ready to put him in foster care.

Oh...don't worry...even a legal ace will crumble when deprived of a cell phone and a car. (evil grin).

Until later, my friends...Go...be happy. Because, in about a half hour (and ,05 grams) I certainly will be.

Note: I fancy myself a comedic writer. Many question the 'comedic'...well, they question the 'writer' part, too...because I'm a bit edgy with my jokes. So, if I offend anyone, please feel free to visit any of the 14 trillion other blogs that talk about sunshine, light and homeschooling and enjoy. If you stay here, you might get your hands a little dirty.

But I'm pretty sure you'll laugh your butt off while doing it. ;)

Posted by papercraftgoddess at 9:17 AM