Under the Big Top Swap for VPI 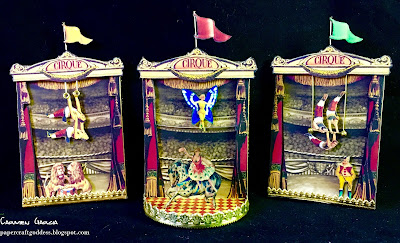 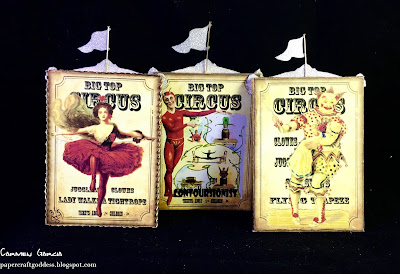 I want to start by congratulating myself on how totally cool and nonchalant I sounded in writing that title. You could almost believe that it's just another day in another swap group with some other gals who like playing around with ATC's.

When, in reality, this is a pretty exclusive group that contains MANY major artists here in the blogsphere. I mean, you have to be approved by a JURY to get in!!!

Or is that judged by a jury?

Because if that's the case, SOMEONE dropped the ball when they let ME in. Trust.

Anyway, it's a pretty big deal. Turns out my personal mentor is a part of the group, too!

You know, Laura Carson of artfullymusing.blogspot.com, my mentor who doesn't know she's my mentor and regarding whom I admit to being a little stalker-y with on occasion?? Maybe?

Another member (and the one that will go down in flames if anyone ever REALLY comes to this blog to waste large amounts of time and figures out she recommended me) is Wendy. My OTHER muse from blissfulatcswap.blogspot.com.

Now you see how awesome it was I was able to carry off such a casual title, right? 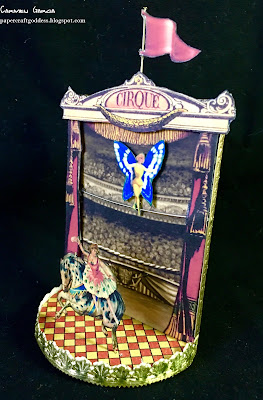 My first swap with the group is Under the Big Top. I knew what I wanted to do, and that was make a triptych. What I DIDN'T think to ask was whether it would be a 3/3 swap with one person or 3 to 3 different people. Since I didn't ask, I ended up with this.

Using foam board, dresden scrap and a WHOLE lotta collage, I created 3 scenes. The main one shows a Papillon tightrope walker (that's a headpin, btw) and a rosin back rider. Using 2 copies of the horse, I glued 2 pins between and had her performing far front of the stage. 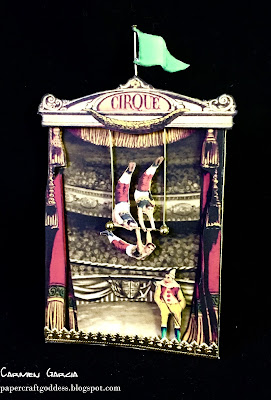 The second card has a triple trapeze troupe (trapeze made of headpins and gold beads for ends) and a sort of weird, forlorn looking clown. I didn't realize how creepy that clown was until I saw him staring speculatively at the trapeze guys. I came THISCLOSE to putting a knife charm in his hand with the blade peeping out from behind him, but figured I'd let the girls at VPI get to know me before I began advocating murdery clowns. 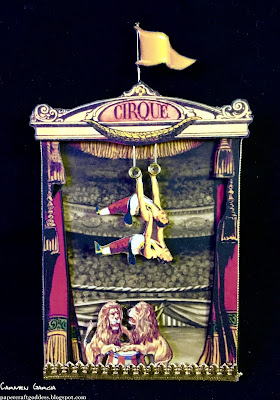 Last but not least, my gymnast ring guys. Or whatever you call them. All I know is that in the collage, it's what they were swinging from already, so I just used headpins and jump rings and brought them into the scene. The lions on the bottom were a fun find and I was THISCLOSE to taking the THIRD guy on the rings (yep..there were 3..I cut the last one for space consideration) and having his legs protruding from the mouth of the lion on the right. But, once again, that little voice said, "Chill. You JUST got here and it already looks like you're on the stalkery side, so do you really want to put everyone on orange alert? C'mon!!!"

So, I refrained. For now.

But all bets are off with the next theme "Mermaid Muses"

Or, as I like to call them, "Mermaid Muses of Murder and Mayhem".
(evil laugh)