Under the Big Top Swap for VPI Part deux 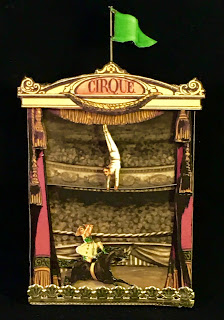 I know, I know....there's nothing more pretentious than using 'deux' instead of 'two', especially when your French consists of...

Wow. I actually don't think I have ANY French to speak of! In fact, I don't even know if 'deux' means 'two' anyway! It just sounded similar! What do I know? What do you people want from me anyway???

Sorry. I'm a little put out.

My husband just came to my art studio (consider it 'French' for craft room) and stood around, moping.

He NEVER comes in here!

Even WHEN he's up to date on his tetanus!

At any rate, he's not feeling well. Oddly enough, this mystery illness only manifested AFTER his golf game.

So, I've got to go take care of the man I promised to love and honor, in sickness and in health. Although, to be truthful, I really didn't mean it regarding the 'sickness'. Mostly because I already KNEW how difficult men are when they're sick. I just said 'I do' because I was HOPING I'd never have to deal with it.

So, with that party waiting to get started, I'm going to post my last circus ATC for the VPI swap. Since they're mailed to other people, and I always include a 'Hostess Card', I decided to make the card with the stage my Hostess Card and make this one to go out to another swapper.

I hear moaning from upstairs. So, it's either ignore him and hope he goes to sleep, or risk staying here and having him shuffle into my studio again and chance him messing something up. Looks like option number 1 is the one to go with if I want to preserve BOTH our sanity.

Have a good weekend!!

Posted by papercraftgoddess at 9:29 PM