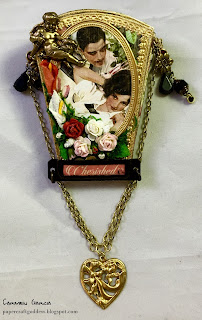 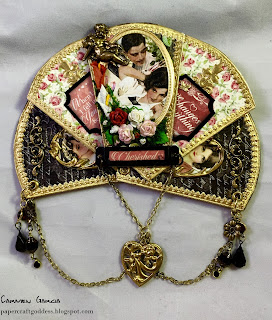 To begin with, I did NOT write this blog title, nor am I responsible for the design of this ATC fan. There are two other women, both genius' in their fields, who are responsible for any moments of brilliance in this blawg today.

The late Erma Bombeck was my humor writing idol. The first book I read of hers was titled "Family...the ties that bind...and gag".

The woman was/will always be, one of the premier humor writers of the 20th century.

The ATC fan design is by Laura Carson at artfullymusing.blogspot.com, who is also a genius when it comes to taking a piece of paper and working magic with it. The downloadable tutorial is available HERE.

I'm involved in 2 ATC swaps this month. This is the first of three for my ATC trade at blissfulatcswap.blogspot.com. I'd hoped to have gotten a little further along on the other 2-and at LEAST started the other swap I'm a part of-but I got a little behind today. That's what happens when the phone rings and it's your kid's school. Again.

There are not enough drugs manufactured to get me to ANY 'happy place' with my three boys in the vicinity.

Now, I realize that I'm not alone...most parents with a teen and a tween understand what I'm going through.

But see, in my case, with two already precocious boys. you have to add a 9 year old high-functioning autistic kid, who just so happens to be the most verbal high-functioning autistic than most people have encountered....who is also a genius in all the wrong things. Couple this child with a teen and tween-whose verbal and grammatical skills are off the charts-and you've got a problem, friends.

It's my fault...I know. You see, I made the mistake of actually communicating with my boys throughout their lives. I also insisted they have a firm grasp on language and world history.

I thought I was so smart, talking to my Pre-K sons about the hugely important events that changed our world as we knew it: the World Wars ,the Civil Rights Era, Disco...

How was I to know the WORST thing you can do is arm your children with knowledge? Because this, along with the ability to frame a cohesive argument, sounds the proverbial death knell for a parent. Mostly because what they lack in argument style, they make up for in stamina ..meaning, they will wear your middle-aged butt down.

For those who think I'm kidding, go ahead. Make my mistake. See if it doesn't result in your kid's grandparents calling night and day to have you explain exactly what their precious grandson means when he uses the word 'obtuse' and will I define it for them...and is it a compliment?

For the record, I told them it was a geometry term.

Is it so wrong that I wish my kids were a little more NORMAL? You know, like the ones that, when disgusted with their parental units, complain to their friends, or make faces behind their backs?

Why did I insist on having to be different??

Therefore, I have to take the blame when my 17 year old salutes me with "Ja, Mein Fuhrer" when I tell him to take out the trash, and wants to argue how the Constitution absolutely does pertain to those under the age of 18, and that I am interfering with his 'life, liberty and pursuit of happiness.' most egregiously.

And I guess it's my fault when I ask my iphone for the weather report and Siri responds with "Will that be all, Bang Ciao?" This from my 12 year old anime obsessed tween.

It would've been funny had I NOT forgotten to turn off my ringer in church.

Right in the middle of alter call.

I could forgive this once in awhile, but coupled with coming home to a computer whose language had been reprogrammed to one with whistles, clicks and whoops...well...suffice it to say there are a few instances where I think Jesus is okay with drinking more wine than is offered at Communion.

Even better are the times their my boy's teachers and I meet up for our bi-weekly lunch (most people call them 'parent-teacher conferences', but I see them so often we just decided to dispense with the formalities and meet up at Applebees) and they tell me how bright and well-spoken my children are. This, of course, is ALWAYS a preface to "(fill in the name of any one of my boys) somehow managing to access the admin computer and change the title of the  School Handbook to "The Communist Manifesto".

Even worse, while trying to chastise him, my kid kept arguing his 'compulsion' to protest and  drawing a comparison between teachers and students by using the phrases 'bourgeois elites' and their repression of the 'working class'.

As if he'd been Mirabeau, wallowing in the filth of 18th century Montmartre, France instead of leading a middle class existence in pokey, old Burlington, NC.

My 9 year old HFA bundle of joy, Liam, is a veritable GENIUS at sensing the worst time to do whatever it is he feels compelled to do.

Like the time our new neighbors asked him how he got along with his older brothers and Liam responded with, "I like it when we all snuggle together before I have to go to bed. I LOVE having romantic family time!"

Of COURSE I don't know where he came up with that!  And you know it's totally innocent!!!

But, yes, I know...we are a child services investigation just waiting to happen.

Liam has been going through a stage where he has to identify every person he sees. If he doesn't know their name, he'll just pick the first physical characteristic and go with that as an identifier.

Would you really like to know what it's like when you're in the middle of Target and your kid is riding the cart like it's the Titanic, while greeting everyone he sees by what they look like?? "Hi fat girl!" "Hello black man!" Hello man with no leg! What happened to it? I can build you one out of Legos!"

Lately, he has begun greeting anyone over the age of 30 as "Grandma" and "Grandpa".

Granted...most people are VERY nice when you explain about your autistic kid. But that doesn't make those first moments after the incident bearable, by ANY means.

But I finally decided I HAD to put my foot down. "You STOP THAT RIGHT NOW!" I said in a loud whisper behind clenched teeth. "They are NOT grandma and grandpa and you might hurt someone's feelings by saying it!! Do you understand???"

Wide-eyed, he nodded. He didn't say a word for a moment or so. Then, seeing an older couple in the check out line, he took a deep breath, looked at me, checked himself and yelled, "Hi...old woman! Hi old man!"

Don't get me wrong...my boys are great. And I love them dearly. I wouldn't trade them for the world and no matter what, at the end of the day, I know what a lucky person I am. I say that to myself over and over....and over...and over....

And if THAT little mind trick doesn't work to keep me sane, well, there's always vodka.

Posted by papercraftgoddess at 2:52 PM