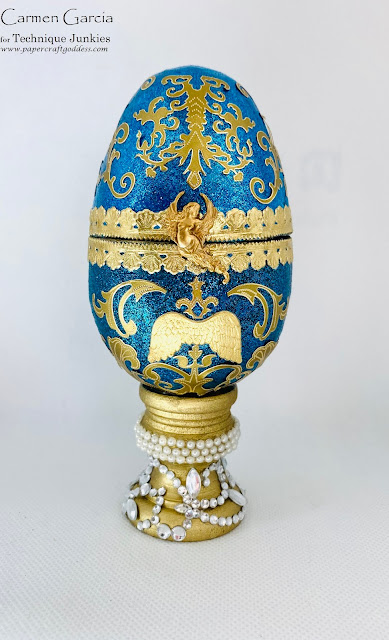 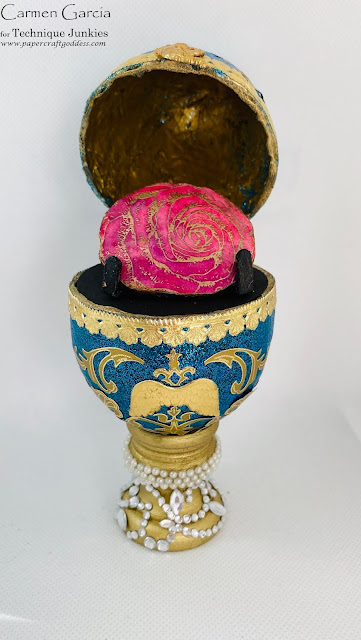 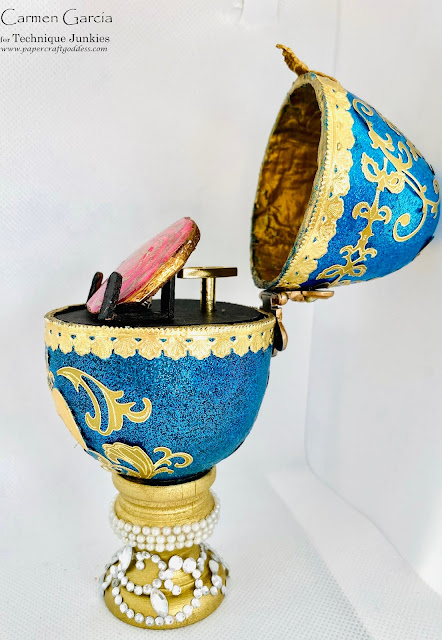 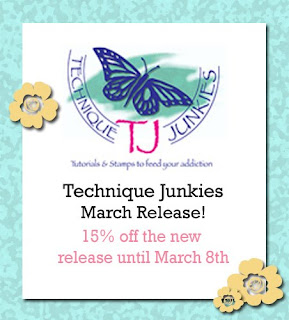 Well, here we are again! It's March 1st and on the first of every month
you should know I'm ready to celebrate!

Mostly because another 28-31 days have passed and none of the offspring have wrecked a car, flunked out of a class or been hit with a restraining order. Hey...my general expectations list is small for a very good reason when it comes to 3 y-chromosomes who are in the throes of puberty and secreting odors I have never experienced in my LIFE. Therefore, I say keep those expectations low.

But  the main reason for the celebration is that we throw one Hades of a party at Technique Junkies with the NEW RELEASES!!!

This will be picture-heavy blog and, as always, I urge you to hop your heinies to each of my TJ Design Team sisters and see their creations as well.

After the tutorial, I'm adding my Diary of a Desperate Housewife "Spring Easter Play" for your pleasure. Now, lets go! 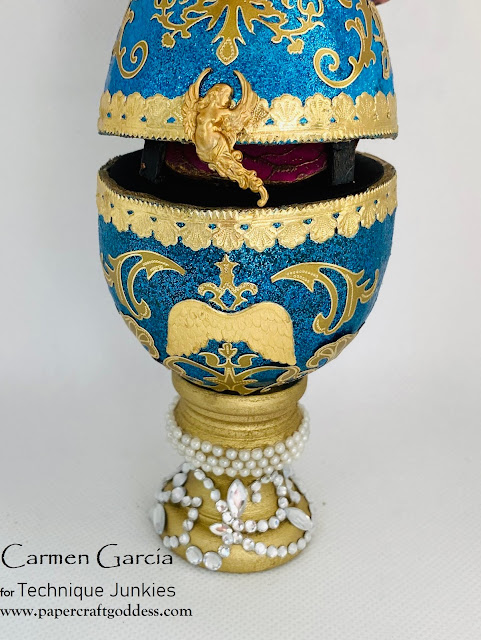 This is the second egg I've made but the first with a music box attached. 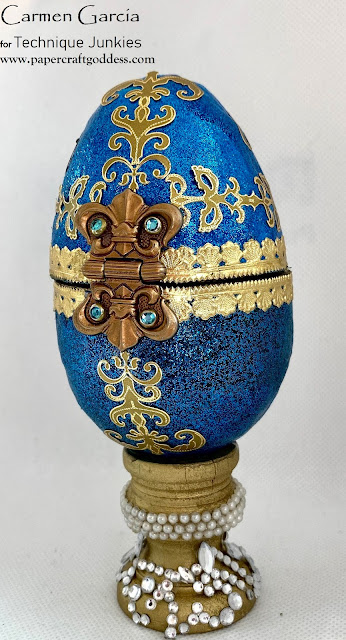 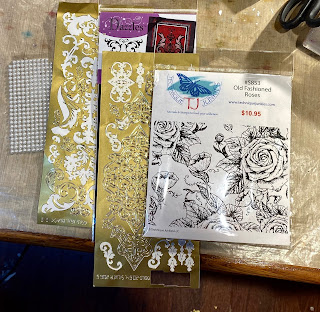 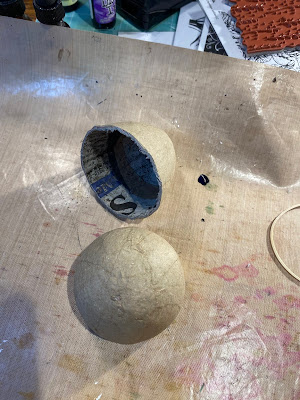 You can purchase the paper mache' eggs fairly cheap at Hobby Lobby. I also grab lots of their pearls and sparkly things when they're on sale as well. The gold Dazzlers I had to order online. This whole idea came from one of the stamps I watercolored from Technique Junkies New Release stamp Old Fashioned Roses  (Remember...15% off automatically through the 8th with an additional 10% off using my code TJ10Carmen through the 8th).

Using a rubber band to mark a center line, I cut the egg in half. I painted the inside with gold acrylic paint and used a bright, sparkly blue embossing powder for the outside. 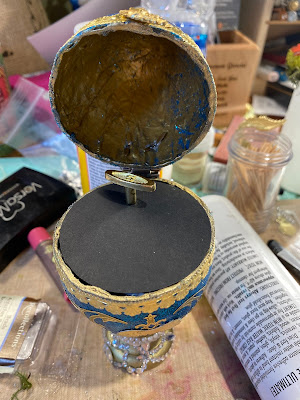 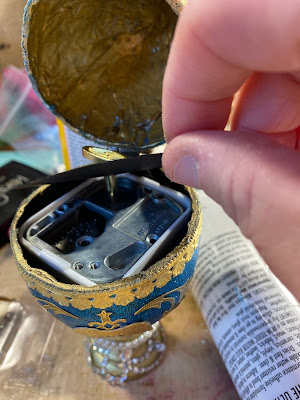 The little music boxes can be found everywhere I took half the white plastic off, unscrewed the key and then took a sturdy chipboard piece to attach to the top. I made a little stand for the water colored rose pin (that tutorial and full project coming up VERY soon!) which I'll attach. Then you can remove the pin and wind the box. Mechanically, I could've moved the key elsewhere but liked the placement here. Using a cheap, wooden stand from Hobby Lobby that I pained gold and used pearl and crystal stickers, I cemented the egg and it was ready to go.

"I Never Promised You a Rose Garden".

Now, time to get hopping! Here are the designs and creations from the rest of the TJ Design Team! And don't forget...15% off New Releases (No code needed!)  until the 8th with an additional 10% off with my code TJ10Carmen. (Code needed)

Diary of a Desperate Housewife

It’s a time of rebirth and renewal.

That is, unless you happen to be me and stuck with your Kid’s first grade spring
recital.
It began with a phone call.

“I’m so glad I caught you at home.” The familiar, patronizing voice oozed from the
receiver.
“No habla ingles.” I said, desperately.
“You are so funny.” Ms. Parisi said in a voice that let me know I was in no way amusing to her.
Ms. Parisi was the Kid’s teacher and had been for the last two years. She loathed me and was so professional in making me feel incompetent, I knew her management position would be safe even if the Devil did decide to downsize Hell.
“We need a parent to coordinate the spring recital.”
“Uh, I really don’t know anything about stuff like that. Really.” I tried to keep the panic out of my voice.
Ms. Parisi ignored me. “We need you to put together the play. The other volunteers will meet you this afternoon at three.”
.................................
When I arrived, the other parents were staring at me accusingly.

“Hi, any ideas for the play?” I said, in what I hoped was a calm voice.

There was a mutinous muttering but I made sure not to look them directly in the eyes so certain tragedy, probably involving dismemberment, was temporarily avoided.
One mother finally spoke up. “There’s this cute play about an Easter egg trying to find a basket he belongs to. He’s all sorts of colors so the blue eggs don’t want him and neither do the red. In the end, he realizes how unique he is and how much he has in common with everyone. It’s all about learning to be happy in your own skin.”
One of the other mothers threw her a disgusted look. “Is that skin botoxed? If so, some people here should be awfully comfortable already.”
“Okay, ladies.” I tried to sound firm but friendly. “We have to get a recital going here. It’s the Easter Egg with the identity issues play. Is everyone in agreement?”
I took their heavy silence as an affirmative.
“I think it would be cute to have someone dress up as the Easter bunny and hand out treats before the show.” A woman spoke up from the back. “I’d be glad to do it!”
I jumped on her offer at once, completely ignoring the wide eyes and slight head shakes of the other parents.
“Terrific. Rehearsal starts tomorrow at three.”
I managed to walk nonchalantly to the door, feeling the weight of their glares. Once outside, I broke into a run.
...............

The opening night of the play found me struggling to refrain from mayhem directed onto my own offspring.

“Mommy,this play is really stupid.” The Kid tried to put his hands on his hips but was
prevented from doing so by the egg costume he wore.

“Look, Kid. Eddie the Egg is a great play. Well, maybe not great but the dance routine that Karen’s two daddies put together really gives it a spark.” I said, trying to stuff more newspaper through the Kid’s armpit holes.
“The dance routine is dumb too. What’re jazz hands, anyway?” He sulked.
“Look, I don’t like it anymore than you do and if I’d known my karma would involve my being roped into this, I certainly would’ve done things a little differently like donate a kidney or eyeball just for the heck of it. Both would be less painful than this.”
I pushed the Kid toward his basket and took a final look around. The play was done and I felt confident I’d finally shown Ms. Parisi that I wasn’t a total waste of atmosphere. Feeling pretty good about myself in general, I watched as the Easter Bunny came hopping through the back of the auditorium doors to the delight of the children in the audience. I had to say the volunteer mom was doing a great job. She was really getting into it. She hopped, then danced a bit, tossing candy to the kids as she worked the crowd.
“She’s great!” I said enthusiastically to two other mothers nearby.
They raised their eyebrows in unison and stared over my shoulder.
The Easter Bunny was now gyrating and slinging candy at everyone. The candies were hard and the people who were getting pelted were crying out in pain.
“My eye!” someone yelled.
As if that were her cue, the Easter Bunny stopped and removed her costume head. Several children screamed in horror. The screams were followed by moans of disgust as the Bunny threw up in her basket. Then she replaced her costume head, stumbled to the nearest seat and collapsed. I could hear her snores from backstage.
“That’s MaryAnn.” One mother said. “She’s supposed to be in rehab but skipped out.”
“We tried to tell you.” The other mother said, accusingly.
Mercifully, the parent acting as stage director was on top of things and sprung into action. The lights went out and the kids took the stage. Half of them spent the entire play trying to either stuff newspaper back into their costumes or remove it entirely. The dance number was hit but only because the kids refused to dance and Karen’s two daddies performed the entire routine on the floor in front of the stage, jazz hands and all.
Eddie the Egg decided to join up with the blue eggs instead of the multi-colored ones and, halfway through the play, the Bunny woke up and started to sing Barbara Streisand’s ‘People’.
The audience sat, frozen. The chaos on stage ground to a halt.
“Hey, we’re through. You need to clap.” An angry, red egg yelled at the crowd.
I’m sure that, at some point, Ms. Parisi took the stage and ‘thanked’ me for my efforts; I wouldn’t have known. I dragged the Kid out the emergency exit and sped home where I tossed the Kid, egg costume and all, into bed.
“But Mommy, how am I supposed to sleep like this?”
“The same way I deal with going to sleep with the same man who promised to love and cherish me forever, then took away my call waiting, which is why I’m in this state of humiliation. You’ll find a way to cope.”
When my husband came home, I was curled up on the couch in a fetal position and unable to speak.
He stared for a moment, sighed and handed me a bag. “I figured. That’s why I brought you this.”
Inside, there was a chocolate bunny and a bottle of vodka.
Now that’s the way to celebrate Spring.

Posted by papercraftgoddess at 8:00 AM