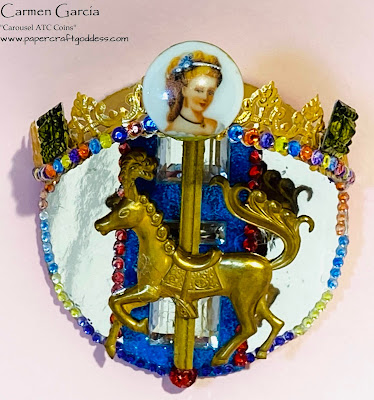 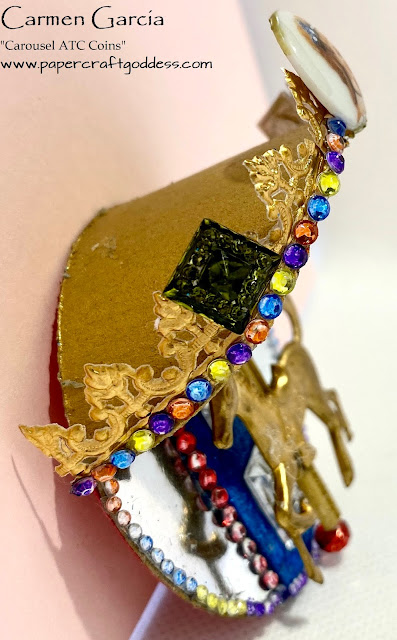 Allow me to begin with simply describing the work. Then, I will proceed directly to the nervous breakdown I've promised myself and scheduled for this evening. I will not pass Go. I will, however, collect 200+ dollars.

Preferably from the marital unit.

We have an ATC swap group on swap-bot named Vintage Imagery ATC's. Swap-bot has tons of groups and swaps and accounts are free...we'd love to have you join or just go and have a good time on the site!

For both swaps we created two pieces to mail to two partners. The first swap was for ATC coins with the theme of "Carousel".

Well, off and on. Mind you, I took numerous breaks to yell at the dog/boys/marital unit and to eat my way through a warehouse sized box of various mini cereals because, let's face it...TWO of those tiny things are barely a regular bowl. For me. Whatever. Don't judge.

ATC coins are 2.5 inches. I cut another circle in half to form the slanted top and topped it with Dresden scrap along with rhinestones I colored with neon Sharpies and a vintage Limoges porcelain pendant on the top of each one. I also cut a dowel and glued beads on top and bottom to make the pole.

The marital unit wandered in to read over my shoulder and began to make a joke about a "stripper pole". To his credit, however, for once he correctly interpreted my withering glance that clearly said "I don't care that you know about stripper poles because you're a (non-active duty) Marine and you probably spent your youth training for ground assaults and obtaining expertise in the engineering of said poles, but don't forget that I rarely find the funny things you say even mildly amusing, so it's best you keep it to yourself and vacate the area that is my immediate presence at once because I'm tired and NOT in the mood to fake even a slight smile tonight."

HEY PEOPLE...DON'T THINK I DON'T KNOW WHAT JUST WENT THROUGH YOUR HEADS AS YOU READ THE LAST SENTENCE. JUST ASSUME I'M SENDING YOU THE EXACT SAME WITHERING GLANCE AND MESSAGE WITH ONLY A SLIGHT CHANGE IN VERBIAGE.

Alright, now that everyone has been scolded, we shall take our new, somber demeanor and move on to the altered bingo cards. 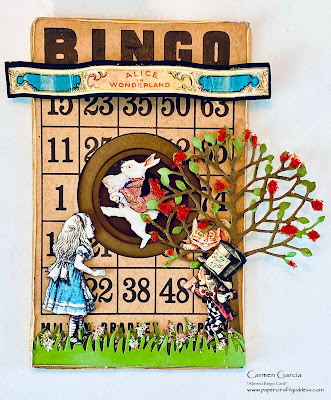 This was my first attempt at these. The trick is to not cover up the entire card. For whatever reason, I saw an Alice in Wonderland theme. I used nesting dies to cut the holes, collage papers I'd purchased and printed out, along with my mortal enemy: Flower Soft.

I hate that stuff. I only resorted to it because I was too tired to make flowers after the effort I'd put into the cards thus far. Call me lazy...whatever. But I'd just wrestled with Dresden scrap that I'd glued around the edges to hide the big gaps created by the rabbit holes. Judging by the end result, I probably should've left the gaps.

Normally, when we do swaps, we include little little gifts that can be used for ATC's. Papers, beads, scraps...that sort of thing.

So, I really loaded the gifts on these. Hopefully, my largesse will blind them to the reality of crappy edging. 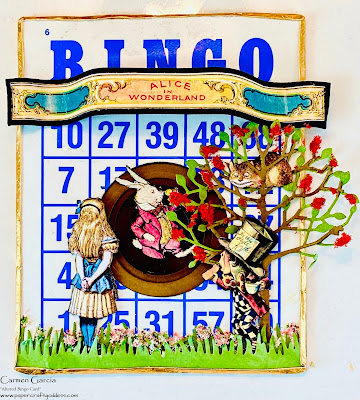 Alright. I've reached the end and NOW I'm too TIRED, not to mention too LATE for the nervous breakdown I'd scheduled! I'd put it on the calendar for tomorrow but my weekend is booked! I have a doctor's appointment on Monday and something on Tuesday, it looks like. So the earliest I can reschedule it is Wednesday. I totally blame the Marital Unit for this.

Why? Because I can. It's my right. It was in my marriage vows and it's also in the Bible. At least that's the way I remember it. This is clearly his fault. And he will pay dearly for it.

Oh look! There just happens to be a Lego convention tomorrow and my HFA (high-functioning autistic) kid LOVES Legos! He'll be bouncing off the walls! He'll insist on arriving the moment the doors open, then he'll be running full-speed from place to place and refusing to leave until close.

Well, my work here is done. Hope you enjoyed your stay and I'm sorry I'm giving you such an abrupt sendoff but that's just how it is, sometimes. Right now, I have more important and timely things to do.

Namely buying a pair of tickets and hiding a set of golf clubs.
Posted by papercraftgoddess at 8:31 PM