Weddings and Their Gifts are a BEACH! 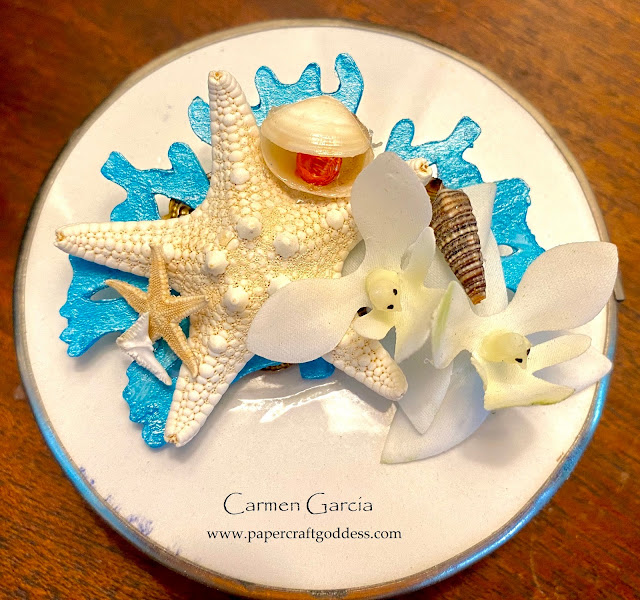 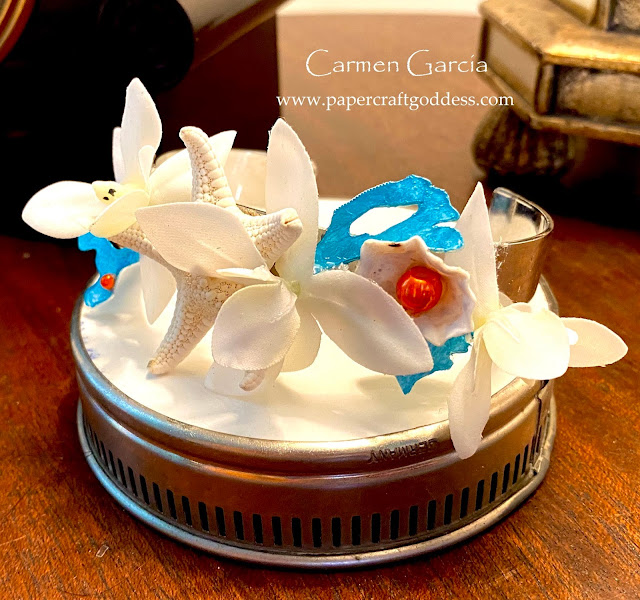 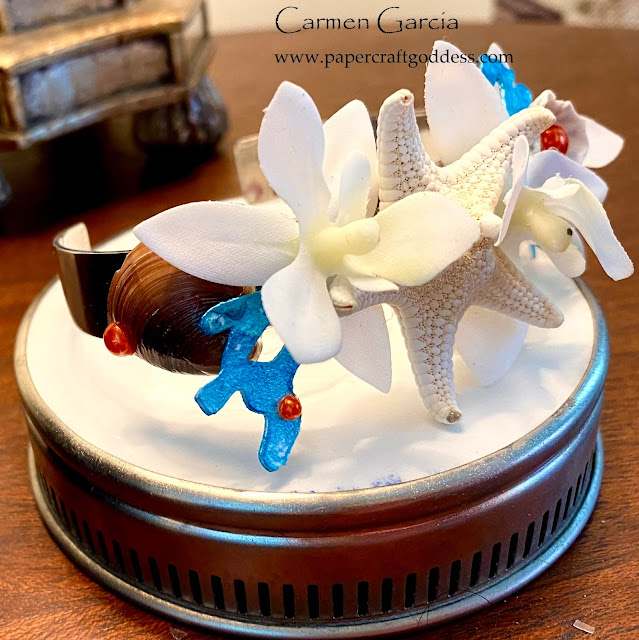 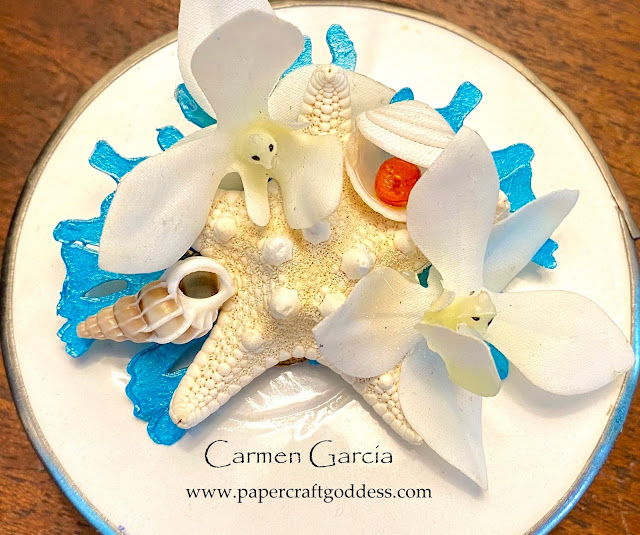 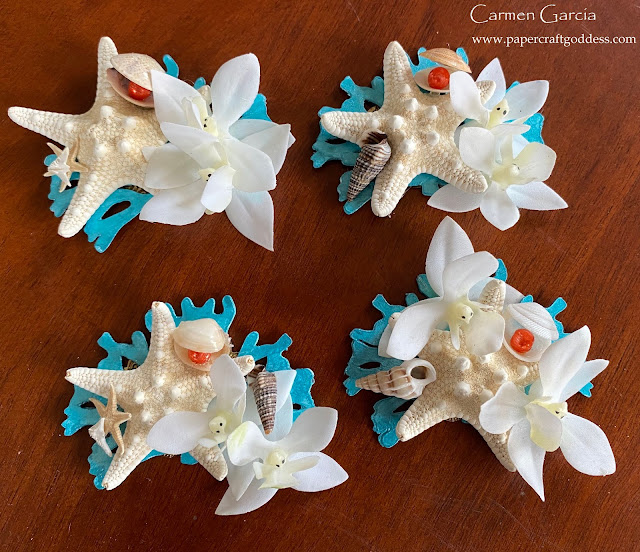 Both Grooms and Groomsmen Boutonnieres

I was asked if I would create 4 boutonnieres and 2 bridesmaid corsages for a beach themed wedding. The colors were turquoise and tangerine.

I have to tell you, friends, my jury was out on doing the project. Mostly because I can't seem to get 5 stamping projects done in 3 weeks. Much less 6 wedding thingies from scratch...something I've NEVER done before.

Then, I was told the wedding was actually being HELD on the beach.

Needless to say, knowing that the element of fun had been kicked up a couple of notches, I was close to being in---CLOSE. But not quite there. Mostly because the beach themed wedding stuff on pinterest was simply crapola. And I wasn't in the mood to create stuff from scratch.

But then, she closed the deal. "They're wearing cut off pants and gauzy dresses with uneven hemlines. And did I mention all the guests have to take off their shoes and leave them in baskets before they cross the sand and take their seats?"

Now I know what fish must feel like when they discover that tasty morsel has a hook in it.

At any rate, I knew I could have fun with it. Therefore, I committed. Plus there were only four guys and a like number of ladies so I didn't feel too overwhelmed. Until it came time to use my Scan N Cut.

Contrary to popular belief, the Scan N Cut won't cut through much of anything. For me, at least. Even with brand new blades. Except the mats. The Scan N Cut will ALWAYS find a way to cut through the mats, even when the pressure and blade is set to 1. It's truly miraculous, in a way that speaks to pure evil and possible possession by some entity with a yen for crafty electronic products.

I had one piece of laser cut coral. I scanned it and managed to cut 19. Of those 19, approximately 4 were close to perfect; 8 were okay and the remaining 7 were an embarrassment to sea life everywhere.

So, I glued 3 together to make the 4 boutonnieres that I needed and painted them with a metallic turquoise. The arrangement of shells speak for themselves. E6000 and Copic markers achieved what I couldn't with the pearls and shells arranged to look like clams with little pearls inside. I really wanted to make the Groom's boutonniere meaningful so I put a "dove" from a sand dollar on the mini starfish as a reminder to keep Christ first in the marriage and to spread His message of goodwill and peace.

You would think that after creating something so meaningful and true that I would have smooth sailing. Yes. You would certainly think that. Read on, friends. Read on.

The boutonnieres were relatively easy. I only needed the flowers. Which should have been the easiest of all things to find. But they weren't. The flowers became the straw that broke the camel's back AND my bank account. How? Not only did they cost a mint, they also robbed me of a chunk of porcelain veneer on my front tooth. Granted, it could just be coincidence that it just happened to shear off at that time but considering I did a lot of teeth clenching and grinding during the flower debacle, I'm saying it's all on the flowers. All 1800-2500 it'll take to fix because both front and the two on either side have to be replaced. Why? Because of the *&$%^%$ COLOR MATCHING. 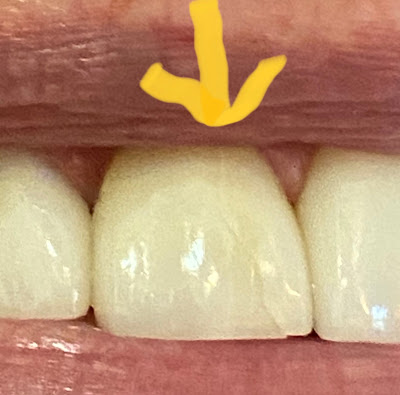 But back to the flower problem before I go apoplectic over the tooth situation, of which I'll find out the damage during my 7:40 a.m. appointment tomorrow morning.

Let me explain. About the flowers.

The flowers I used are called Mini Dendrobium. Kind of an Orchid. I bought them because I'd seen this corsage on pinterest and fallen in love with it. 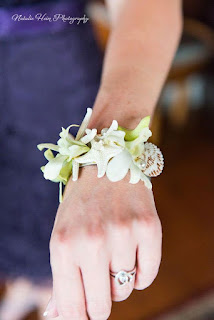 I wanted to use similar flowers but couldn't figure out what they were. A friend of mine who works for a florist helped me look and the closest she came were the Dendrobium. 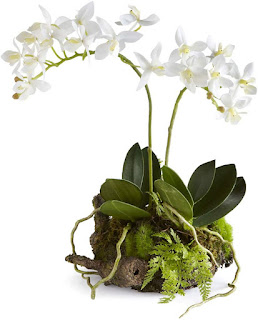 I thought they'd be perfect! Until I saw the price. 40 bucks with tax. But hey...free delivery!!

Wait. Just kidding. It DID give me pause. But I justified it by thinking I hadn't spent anything so far AND it counted as a wedding gift AND since I WAS going to duck out of going at the last minute (no one knew that yet...I'm just not really big on social activities. I'd like them a lot better if not for the whole "people" aspect of them) then 40 bucks wasn't really that big of a deal. Although, it's kind of sad to see the Dendrobium now.

(I made sure to shoot it in the portrait filter so the empty, green limb isn't as prominent and the fact there are only 4 blooms left isn't too obvious.)

This is the first-and probably last-bridal contribution I'll make. Unless there's money involved. Quite a bit of money.Their money. NOT mine.

The 40 bucks really seemed to be a great deal for me. Normally, I'm not one to really find great deals like many of my friends. It's really rare I stumble on a real find. So, to get out of a wedding gift for only 40 bucks seemed pretty decent for me. Until the tooth. So, I hope the couple appreciates my 2k wedding gift. It's certainly the most expensive I've ever given. Okay...I'll stop being snarky. I'll just deal with it and have it fixed.

But I can guarantee that it won't be the mother's who are the only ones crying over this wedding.

Posted by papercraftgoddess at 8:00 AM