Oh no...thin ice coating on road...school will be closed until June... 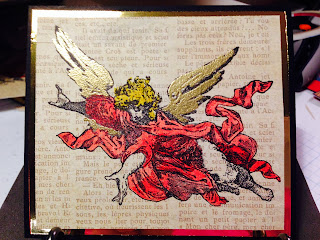 Angels on High. Created for SCS Challenge Ways to Use It (WT456)


Having grown up here in the South...the thriving metropolis of McLeansville, NC. to be exact...I always looked forward to school closings. I would take a delay, but school closings-though incredibly rare-were fervently prayed for by every child south of the Mason Dixon line.

When WFMY's Lee Kinard began reading school closings on the mornings we had any type of precipitation after December 1st, I knew things were about to take a turn for the better. My small, rural school was bound to make the list and we were free...FREE! Never mind there were only a couple of snow flurries, the schools down here would shut down tight. The general perception was that a couple of snow flurries were too much for the county's road plow crew, which consisted of two Ford pickups with sheets of metal fashioned into a haphazard plow on the front (they didn't get much plowing done, mostly due to their need to show off in front of the single Dodge that inevitably showed) and a really old guy, smoking cigarette after cigarette, diving a decrepit truck rigged to throw salt everywhere EXCEPT the road.

Later in life, I would end up doing time in Minnesota. Ok. It was a BIG job offer and there was no way I could've said no. Besides, my morning show partner and I went for the interview in October and there are fewer things more beautiful than Minnesota in October. We also got to see the Mall of America and there are fewer things more beautiful than...well...you get my drift.

I stepped on a plane with two kids, headed from Tampa, FL to Eden Prairie, MN in November of 2000. It was 80 degrees when we got on the plane.

It was 17 degrees when we touched down, with a wind chill factor of 11 below.

I'll never forget the moving guys trying to get our stuff in the house at a breakneck pace. Blake, my youngest at the age of 2, was trying to play in the snow in shorts and a t-shirt. He was a gorgeous shade of cerulean blue by the time I snatched him up and tied...I mean "bundled'...him up in a back room.

It was the first of June before it got consistently warmer.

Needless to say, schools in MN NEVER closed during the three years we were there. They had a veritable army of snowplows ready at the drop of a hat to keep the roads open. It truly was a gorgeous place but too much for a Southern girl...at ANY salary.

But back to the here and now. I'm hoping school will be open tomorrow. The kids need to learn and the structure and consistency is good for them. They have fantastic teachers and their day won't be wasted in a classroom. As you can imagine, this reasoning doesn't strike much of a chord with them. So, I remind them of what a snow day at home with me would consist of...and that's mostly me yelling at them for destroying the house and ending with a crying jag, screaming about their lack of appreciation for me.

Needless to say, all three are praying for school tomorrow.

Those are some smart young'uns.

Posted by papercraftgoddess at 2:43 PM