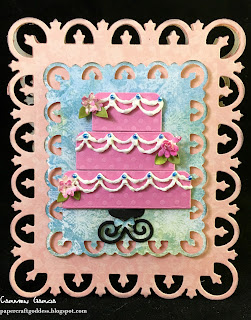 Let me begin by saying that I am DELIGHTED to be back into the Impression Obsession challenges. As most of you know, IO was the company from which I purchased my FIRST DIE!

Unfortunately for my husband, that number is less an exaggeration and more of a ballpark. Oh well.

I wanted to bring this up because it makes this next admission one that I simply cannot believe I have to make. Don't get me wrong....I make all sorts of mistakes and gaffes. Constantly. But rarely do I find myself in the predicament I found myself in the IO challenge.

You see, this challenge was titled "Birthday Wishes". And I knew EXACTLY what I was going to do.

I'd gotten this awesome wedding cake die from IO and have been DYING to use it. So, I cut the layers in pink patterned paper, cut the ropes in white, then added liquid applique to give it a puffy, 'icing' look. I altered the stand to make it shorter and hid the adjustment with the little bow that comes with the die. I used some paper roses and leaves from another IO die and was simply thrilled with the outcome.

But it was then I realized what I truly thought was something not EVEN possible. Not the with amount of things I've purchased from Impression Obsession. Can you guess what it is???

That's right! I own 75% of their dies and while I don't own as many stamps, I made sure to buy a few sheets of sentiments for each holiday. The one I missed? That's right. I didn't have the words Happy Birthday from IO ANYWHERE.

I don't believe it either. Suffice it to say the first thing I will purchase with any gift certificate I may win, is a Happy Birthday sentiment. Seriously...do you KNOW how much anxiety I suffered from? And I had to suffer silently! Because my husband certainly can't commiserate when I sob that I have no birthday sentiments to use on my IO challenge cards!

To be fair, it really doesn't seem that terrible in print. But it was terrible. You'll have to trust me.

So, we're going to hope it looks enough like a birthday cake that the judges over there will just totally forget to look for a sentiment. Hopefully. Sigh.

I've got to do a little shopping.

Posted by papercraftgoddess at 6:43 PM