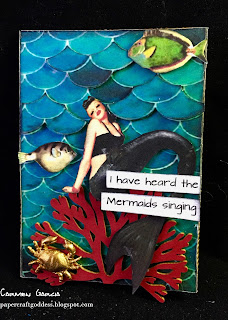 First of all, I can assure you that every one of the elements in this title will make this blog post. Some how, some way.

Lets begin with the easy one: Mermaids

This ATC is one of the 3 I'm making for the swap at VintagePhotoImageATC's. This is one of the two ATC swap groups that I was DYING to join. Your work had to be judged by a group and, once selected, you had to fight others to the death in hand to hand combat. Where, thanks to my mad skills with a bow and arrow...

I totally get my life mixed up with movie plots, sometimes. Because you can see where there would be confusion between a hot, young bow and arrow ace who was fighting to deliver her world from oppression, and a 47 year old woman whose only skills are fitting a half a carton of ice cream in a regular sized bowl and who thinks the way to deliver her world from oppression is through open communication and vodka.

In tandem, mind you.

Like it or not, you have to admit it's a close as anyone else has gotten.

The swap I'm signed up for at the present is Mermaids.

I found this pin-up mermaid on a collage sheet from etsy and the background is a print out of a tile sample. I printed it a couple of times and popped it up here and there for depth. The coral piece is from Alpha Stamps, as well as another mermaid collage set, Mermaid Garden, designed by Laura Carson.

The sentiment is from a T.S. Eliot poem, hence the title of this ATC "Eliot's Muse".

I have two more to work on and I'd actually planned to do it tonight. In fact, I was PLANNING on it. Except I had two instances over the past three hours where I bit the back of my tongue. In the same place. Now, there's a horrid bump on the back of my tongue that hurts so badly I tracked each child down, along with the husband, and warned them (through clenched teeth) that if they did ANYTHING to make me yell at them and I bit my tongue doing it, they would WISH they were in a dark forest filled with half animal/dead humans monsters and psycho children wanting to cut their throats, a la Hunger Games.

Maybe it was the delivery, or maybe they knew there was a bit of truth to that warning, but all four fled. As they pulled out of the driveway, the 17 year old (who THINKS he's immortal, apparently) leaned out and said "Isn't that what you used to tell us were 'Lie Bumps' when WE got them?"

Good thing they were in the Beemer and could outrun the force of my fury.

Actually, that's what my grandmother used to call them. If you told a lie, you got a nasty, sore in your mouth. Now, of course I didn't believe her after I reached 7 or 8. Mostly because I figured out that if it were true, my entire face would've been a festering sore.

Since all I can do is swish salt water and sulk over not being able to eat anything worthwhile, I decided to upload this ATC and head out to the barn to spend time with another family member. My 11 year old beautiful quarter-horse Coco. Seriously...she's one of my children. And like my kids, she has totally got the 'ignoring me' thing down pat. Not to mention trying to bite me when I try to clean her up and refusing to acknowledge me unless I bribe her with treats.

I TOLD you she was just like my kids.

Well, it looks like my job here is done. I worked in the title, displayed my ATC and now I'm going to take my lie bump and attempt to soothe it with an obscene amount of ice cream.

Posted by papercraftgoddess at 8:41 PM