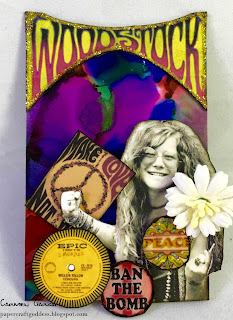 SOMEONE has been a busy bee!!

If making a card and an ATC over the course of three days can constitute being 'busy', that is.

This is the 3rd and final ATC for the Mello Yello theme at blissfulatcswap and now everything is packed and heading for Bev in the UK. I'm really curious to know if it'll get checked. Chances are, it will. Based on my facebook posts alone, I am a subversive, and potential anarchist.

As much as I 'think' I can make the things I pin on my pinterest, and as much revolutionary talk that I do on facebook, the fact of the matter is that if we were REALLY going to accomplish something, we wouldn't be spending time talking about it or pinning it. We'd be DOING it.

The great thing about these sites, though, is that it allows us to believe we are actually accomplishing something.

Of course, we're not, and we all know it. But it FEELS like I'm being productive when I share a news item, or pin a new recipe. I'm almost convinced I'm doing my part for humanity and the family. And I have to tell you, the older I get, the more easily I can convince myself that I have, in fact, made a difference.

God bless the internet. If it weren't for that, I'd probably not even be capable of these totally imaginary positive changes I make every single day. The internet has given us the gift of delusion...and I think I can speak for all of us when I say "thank you."

Now to this ATC:

Using alcohol inks which I dropped at random on paper coated with the blending solution, I came up with a psychedelic background. Using a great photo of Janis, a picture of the album 'Mellow Yellow' by Donovan, and various other 60's stuff (the ban the bomb and peace circles are coated with glossy accents to resemble 'buttons') I attached the woodstock at the top and decided to leave a nice amount of the paper uncovered. Mostly because I couldn't believe I actually tried a technique and accomplished it in ONE TRY. It was a miracle, people. A miracle, I tell you.

Even a tireless, facebook revolutionary needs a break sometimes.
Posted by papercraftgoddess at 5:00 PM