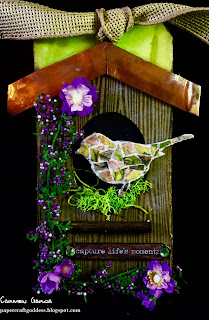 This was a FUN Tim's Tags. I've never done the mosaic thing, and it really was incredibly easy...not to mention it's an AWESOME effect!

The best part, other than the excuse to buy Tim's Distress Paper Mosaic kit, complete with grout, glue and glaze, is that you really CAN'T screw it up. It's foolproof. Seriously. Because if anyone can screw something up, it's me. As my grandpa would say, "You could mess up a two car funeral."

Of course, this was the same man who, in complimenting a specific food dish, would say "This is so good, that if'n I put in on the top of my head, my tongue would beat my brains out trying to git at it."

We're a very descriptive people down here in the South.

But back to the tag. Using a bunch of green distress paint, I inked the base tag. Then, using Tim's resist paper, I brayered it lightly with antique linen distress paint, dried it, then used various stains over it. When you dry it, the paint is an additional resist. For the mosaic piece, I had the bird in a cage die, so I cut off the stem on the bottom, used the grout, then glued the little pieces of vellum from another one of Tim's paper collections then glazed the top. I used a light coat of wilted violet on the group. Very light.

Heated copper strips became the roof, a dowel piece-colored with walnut stain-serves at the post. I used garland and flowers and moss to accent and, lastly, a word band that I changed to copper with alcohol inks and colored the words in white with Tim's new crayons.

Considering my abject failure last month, suffice it to say that I'm as happy as a pig in...umm..his #2 stuff. And while I don't want you to think I'm putting on more airs than an Episcopalian, it's so nice to sit down and have something come together, instead of a project that makes me feel like I'm trying to put socks on a rooster. Even if it means buying more craft supplies, which I need about as much as a tomcat needs a trousseau. In the end, it's nice to see something completed and done well.

I tell you, if I were any happier, I'd drop my harp plumb through that cloud.

That's it for me...time to put out the fire and call in the dogs.

Posted by papercraftgoddess at 10:29 PM