More Mermaids and a Birthday 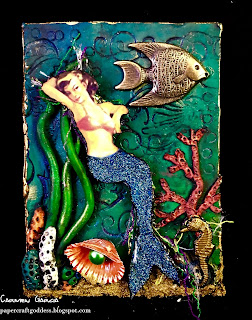 Let me go ahead and get the self-serving part out of the way:

My birthday is April 16th. I will be 48. I would appreciate money or gift cards.  Don't worry about what gift card I would enjoy because any will do. If I don't like it, I'll sell it on cardcash.com.
That is all.

I've never been one of those girls who cared about their age. In fact, I've always been quite happy to tell it, because I've worked hard not to SHOW it.

The same thing with my weight. I swore I'd never be one of those girls who professed to be 130 pounds when the scale read 40 lbs higher. By the same token, I swore to never be the chubby girl who would sit and say "I don't hardly eat ANYTHING!" or "I'm starved! I haven't eaten all day! I usually only eat once a day anyway!"

That totally drives me crazy. There's no way a chubby girl stays chubby by not eating. If she's not eating all day, then she's consuming at least 3k calories in one meal to maintain her figure. Bottom line: metabolism plays a huge part in our ability to gain or lose weight. My metabolism is virtually non-existent. But I'm chubby because I eat a lot of grilled cheese, ice cream and snack cakes. A little more honesty, people. Just a little.

Anyway, back to whatever it was I was rambling about. Oh...age. That's it.
The main reason I managed to keep a decent complexion over the years was due to sheer coincidence. And that would be my chronic underexposure to sunlight. I'd love to say that I knew the dangers of UV damage and went out of my way to protect myself, etc. But the fact is, I had no clue about UV rays or sun-related aging, or any of the other dangers that make up the lifeblood of the billion dollar cosmetics industry. Nor would I have cared. There was one reason, and only one reason that I stayed out of the sun and preserved my skin.

I was too chubby to wear a bathing suit, so I spent most of my time indoors reading.

And yes...that's is absolutely the truth.

Besides, I'm not white...I'm translucent. The sun and I never quite got along. In fact, while I was in my 20's, I went through this stage where I really hoped there were such things as vampires, because I wanted desperately to be one. Why not? Thanks to Anne Rice's Lestat, vampires were hot, immortal and could lay down some serious vengeance when they wanted to.

Sorry. I can't believe I just told you that. But since I already went there, I might as well admit that I used to physically LONG to go to Hogwarts, when I discovered Harry Potter at 30. And I mean I LONGED to go.

Side note: I saw this on pinterest: "That awkward moment when you turn 11 and don't get a letter from Hogwarts." My kids actually admitted to hoping that would happen and being a little disappointed when it didn't. I didn't have the heart to tell them that, even if it did, if I couldn't get into Hogwarts at 30, they certainly wouldn't be allowed to go without me, so it was a moot point either way.

Before this goes completely off the rails, let's get back to my birthday. Because THAT'S what's important, here, people.

I realize I should be a little more modest and act like the day isn't that big a deal. But the truth is, the entire MONTH of April is a time for celebration. For me. Mostly because I have managed to survive this long. That's all birthdays really become after 40, you know.

So, as I sit here and revel in my survival (and hopefully money and/or gift cards...see above), I figure it's a good time to move on to the 2nd most important part of this post.

The second of my Mermaid themed ATC's.

Once again, I decided to indulge in the abuse of polymer clay. That's really the only word for it. Since I clearly have no idea what I'm doing, I can't call it "working with clay"...no...it's actually taking some poor, innocent lump of clay and subjecting it to numerous trips through the pasta roller, while verbally abusing it, and its inability to read my mind, over several grueling days. This was the first time I tried what is called the "Skinner" method of creating a kind of gradient in clay color. Like this 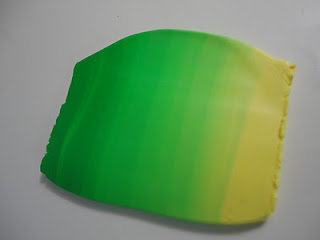 I achieved a muted gradient that was completely irrelevant by the time I slopped everything else on it. But the base, the red coral and the coral opposite, along with the seaweed is made from clay. The fish and seahorse are brass elements, and the mermaid is pieced together from collage images. Desperately needing some sparkle in my life, especially since I was all but banned from using glitter by the Y chromosome inhabitants of this house, I MIGHT have gone a little cray-cray with the glitter.

Side note dos: Ban on glitter notwithstanding, I have a hidden stash that could light up the entire city of Burlington, NC, if not including Greensboro and McLeansville. They can ban all they want...but they'll have to pry the glitter out of my cold, dead, glue-tacky hands.

I glued a shell with a glass pearl at the bottom and filled in with Ferro Special Effects Paste in Amber Gold. It looks like sand and I promise that you'd have an easier time convincing a superdelegate to vote for Sanders than scraping that stuff off your project.

I used gold liquid gilt around the edges and sealed it with acrylic spray.

Now, I believe I've spent enough time on you people. I have another 22 days of celebrating my survival and I need to get to it.

The danged ice cream and cake isn't going to eat itself.

Posted by papercraftgoddess at 2:06 PM