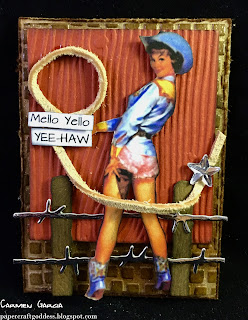 I totally understand that you may be confused.

Mello Yello Yee-Haw??  "What the Front Door does that mean??"

Dang. It just doesn't work, does it?

I was SO excited the moment I first heard someone say "Shut the front door".

I THRILLED in the cleverness and that tiny little electric shock you felt for a second, until you realized they said "front door" and not "f.....

Errrr...never mind. You get my drift.

It used to be so easy to learn new lingo and work them into conversation. Youth gives you a certain tongue dexterity and inherent knowledge of how to work popular words and sayings. I remember laughing with my high school friends saying things like "That was so CLUTCH!" and delivering it in a way that A: you knew we were NOT talking about a car part and B: we were authentically young and cool.

One of the saddest parts in a human's life is the day we attempt to use a popular word or phrase in the vernacular, and all conversation STOPS. Then, you hear the sound that just turns you to ice.

Teenagers laughing at you.

I actually remembered when it happened to me.

I was still in radio and doing a morning show in Minneapolis. I was 31 or 32 and one of the hot songs at the time was a song by Jay Z. called "H to tha' Izzo"

And yes. Spelled that way, exactly.

Being someone who has always been convinced there's a hip hop artist underneath her translucent skin, I was enamoured with the song and spent about a month learning it.

NOTE: That really should've told me something right there. When you start having trouble making out lyrics, and you can't memorize a song after hearing it only 3 times or so, you're ALREADY too old to be engaging in the tomfoolery that I was engaging in.

But ignorance is bliss, as they say.

After a month, I had the song down and had managed to look up any words I was confused about. For example, Jay Z says "if they was short of cheese I would work with them." Purveyor of rap lingo that I was (cough cough) I KNEW we weren't talking about real cheese. In this sense, it meant money. So, having this wonderful song deciphered and memorized (can you just imagine my rocking out to this song as I was driving?....my VOLVO???) I was ready to casually throw out some well-timed and casual slang words, that would prove I was still young and impress my co-workers and listeners.

My co-host was talking about a local news story and asked what I thought. "Oh puh-leeze." I said, looking down at a paper so they wouldn't see how excited I was to use some hip lingo. "I mean, I'm with you, John. Totally fo shizzle my nizzle!"

In radio, there's a term called "dead air". It's as scary as it sounds. It's usually when we run to the bathroom and a song stops in the middle. Or a song runs out quicker than we expect it to and we're not ready for it...most of the time not even in the control room. So there is absolute silence on the channel. Nothing in the world could generate a butt chewing like dead air. But I assure you that there was complete silence for a few seconds. Looking up, I see my co-host staring at me with mouth open.

My co-host, closed his eyes, faked a laugh, and said "You sure did! We'll be back after this break."

Off air, I said "Really, John. I'll be more than happy to give you a definition to the modern lingo and euphemisms if you need it."

"No need," he said with a sigh. "I got it, alright. I was just taken aback because I don't think anyone has ever referred to me as the N-word."

You see, the line in question goes "Fo' shizzle my nizzle as we dribble down in V-A" The word 'for' is obvious, as is 'shizzle'. You can tell it's a derivative of 'sure'. So, we have the first part of the phrase and it's pretty clear. "Fo' shizzle" means "For sure".

But, as seems to happen with MOST of my endeavors, the rest fell apart quickly.

Where I was thinking "my nizzle" was a term of endearment-like 'friend'-that Jay Z just made up to rhyme with 'shizzle', well....it just wasn't. Turns out the word 'nizzle' is a word that Jay Z can use all day long.

But for a chubby, translucent girl in her early 30's? Not so much.

Well, I've wasted most of the evening for BOTH of us. So let me at least explain the danged ATC.

The second ATC swap group I'm a part of is Blissful ATC Swap (whose owner, Wendy, allowed me to join and yes...I'm pretty sure alcohol was involved) and our April theme is "Mellow Yellow'. Now, most of us know that Mello Yello is a drink and that it's also the name of a song by Scottish hottie Donovan.

Butt (pun intended...you'll see!) did you know that is was a phrase "mellow yellow" appears towards the end of James Joyce's novel Ulysses, where it is used to refer to Mrs. Marion Bloom's buttocks??

I used kraft paper and distressed and inked the edges. Then, I put a piece of inked kraft into my mosaic embossing folder, rubbed Versa Mark on top and embossed with clear embossing powder, which makes it look like leather. Another woodgrain embossed piece of paper, a leather lariat and a barbed wire fence (cut from a die from MFT My Favorite Things) completes it. LOVE that die!!

So, now you know.

I'm going to sign off now and make a pledge to just say no to using slang. I'm neither convincing NOR authentic when I use it and I need to embrace my age in a mature manner and leave the hip hop, rap and its lingo to the kids.

Until I'm in the Volvo. Alone. With the windows rolled up. And me.

Posted by papercraftgoddess at 6:00 AM