Curling up with a good book and wondering why people don't want the free stuff I'm giving away!! 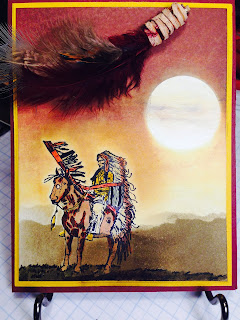 
First...it's Challenge time. This is for SCS Ways to use it and we were encouraged to draw inspiration from your fave book. Mine is Non-Fiction and I've been telling EVERYONE about it! It's called 'Empire of the Summer Moon' and it has multiple narratives but all centered around the rise and fall of the Comanches. Do you know that the reason Mexico gave such generous land grants to Americans to encourage them to come live in Texas (late 1700's, when Texas was part of Mexico)? It was because Mexico wanted to create a barrier between Mexico and the incessant Comanche raids! Comanches were the first to fight on horseback and mastered a horse like no other. This book was SO astonishing that I read it AGAIN.

And will again, I'm sure.

The second part of my title has to do with my consternation that not ONE PERSON has commented on my previous post and tried to win brand new free stuff!!!! I even handle the postage? What do I have to do? Add more stuff and make it more valuable??? Fine. I'll ALSO throw in a Copic sketch marker-E15- (I had an extra...unused) and will now ask, is this ENOUGH????

<pouting and refusing to write anything funny until someone pays attention>
Posted by papercraftgoddess at 6:44 PM