My Husband Knows Nothing... 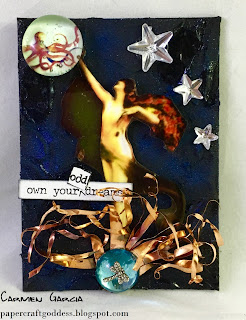 What does it say about a relationship, when a wife can't have a little alone time with her acetylene torch?

Seriously...I'm in the garage, minding my own business, and just when I'm getting my groove on heating strands of copper, Mr. Safety comes down and thinks he has got to put his own two cents in.

"You shouldn't be doing this in the garage." he starts.
"Why not? It's dark outside! How am I supposed to make sure I've got the right color when I heat the copper? Too much and it turns silver. I'm not having that."
"You'll have plenty of that and more if you get any nearer that box of spray paint cans and primer. And do you even know where the gas can is?"
"Oh please," I said, trying to sound confident. "I'm not going to let this touch gas!"
"So, I'm taking it you aren't aware that the most flammable part of gas is the fumes?"
"I...I...knew that." I said, promptly shutting off the torch.

Well, actually I knocked it over. Good thing it has a safety feature that shuts it off. Of course, you STILL have to twist the knob to shut off the gas that's still hissing from it.

But that's not the point...the POINT is that chances are, nothing would've happened. I know this because I've been heating copper for awhile,now, and ALWAYS in the garage. This was just the first time HE figured it out.

But now, I'm too nervous to do it again. It's like, before, I was ignorant of all the dangers and therefore, I was protected from harm. Now that I KNOW the potential danger, I can't take the chance again or I'll blow up. I just know it.

Yet ANOTHER moment in my life he has ruined for me.

You have to admit that it's pretty suspect when he shows up to pooh-pooh my attempt at etching with acid, or soldering or drilling stuff, but NEVER has anything to say about the chemicals I come into contact with while washing dishes!

At any rate, heated copper aside, the only reason I don't punish him (not by using the 'silent treatment'...they LOVE it when we do that...I punish him by making sure to talk incessantly to him about things like gardening and crafting) is because this ATC was already a disaster in the making.

Our theme this month is "Odd Dreams". I started by using matte and glossy black embossing paste to create a cool background.

Then, I sat and stared at it for five days.

I found this collage image and printed her out on paper and transparency. Then, the heated copper idea took root and I cut some copper with my fringe scissors and heated them. The colors came out nicely, I think. Using an antique blue rhinestone, I glued that and the dragonfly on top and added stars, a clear floral stone with a pic of an octopus behind it to mimic the copper, and the sentiment "Own your Odd dreams.

I'm convinced this is what it looks like when my mojo has had enough and hauls you-know-what out of Dodge. Because I haven't seen that sucker in two weeks. And time is running out. I can't afford another ATC like THIS one.

Hopefully, number 3 will be a stunner. If not, there's ALWAYS the acetelyne torch to use in a different, yet still effective way, and that's to set them all afire. Which is okay.

As long as I don't do it in the garage.

Posted by papercraftgoddess at 4:12 PM